Another quarter brings another set of standout results from multi-industrial companies Illinois Tool Works (NYSE:ITW) and 3M Company (NYSE:MMM). There's little doubt that more favorable end markets have benefited both stocks. In addition, both sets of management are well versed in wringing every bit of earnings growth they can out of their businesses.

However, both stocks trade at historically high valuations. So let's examine Illinois Tool Works's earnings and try to see whether the company can grow into its valuation in 2018. 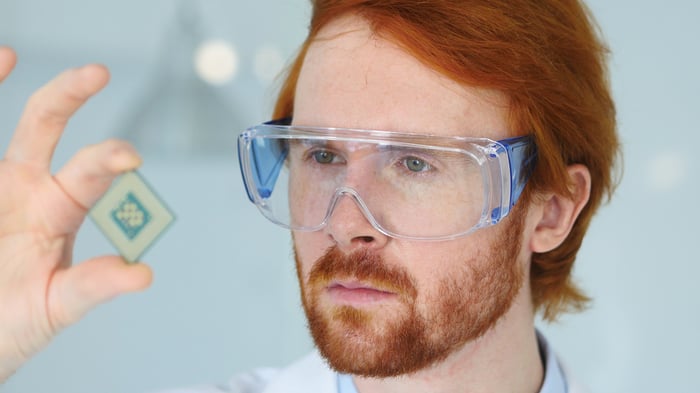 Neither 3M nor Illinois Tool Works is cheap, but then they haven't been for a while. Of course, this is the sort of thing that happens to stocks when they execute well and have cyclical tailwinds behind them -- the market is willing to pay up for growth prospects as long as momentum and management execution continue. 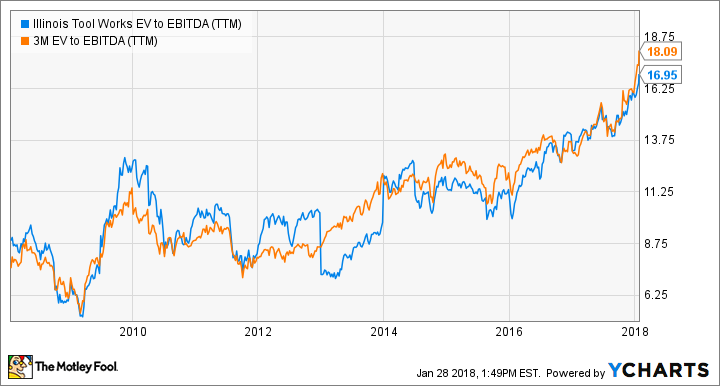 Good, but not perfect, end markets

The following chart illustrates my point about cyclical expansion. Illinois Tool Works' most cyclical segments -- test and measurement and electronics, and welding -- have come back to growth in the past year or so, and management expects 4%-5% organic revenue growth from both in 2018. It's a similar story at 3M Company -- its electronics and energy segment just reported 11% organic revenue growth in the fourth quarter, the third double-digit growth rate in the past four quarters for the segment. 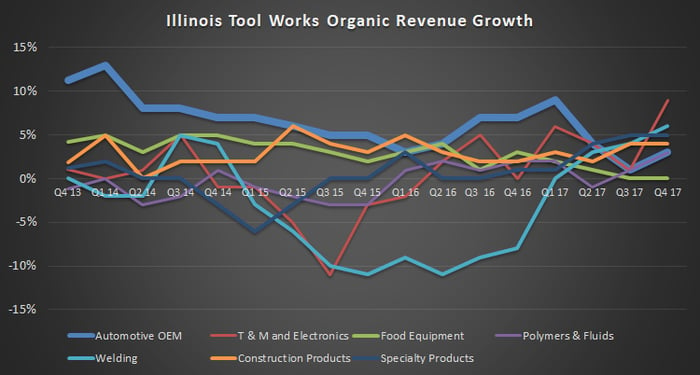 However, it's not all smooth sailing for Illinois Tool Works. For example, in a warning sign for peers such as The Middleby Corporation (NASDAQ:MIDD), Illinois Tool Works' food-equipment segment remains weak, with CEO Scott Santi saying he doesn't "expect much improvement in market conditions in North America" and adding, "There is some optimism as it relates to the second half." There are some tentative signs of recovery in the food-equipment sector, but don't expect too much when Middleby gives its next set of earnings.

All told, Illinois Tool Works is seeing cyclical tailwinds, but not in every segment.

It's not all about end markets, though, because management deserves some sort of gold medal for being able to expand operating margin even as the U.S. industrial economy slowed in 2015-2016 and costs turned negative in 2017 because of higher raw material prices.

Margin expansion continued throughout these periods largely as a result of self-help measures such as the company's so-called enterprise initiatives -- things like reducing less profitable product lines and restructuring for growth. A similar dynamic exists with 3M Company, whereby volume growth is helping offset price weakness. 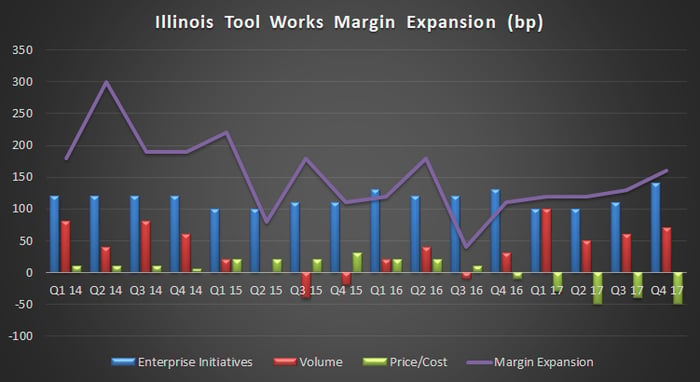 It's a very strong performance in terms of margin expansion, and sales growth looks good, too. Given that the company's overall organic growth rate was 4% in the fourth quarter, analysts were entitled to ask whether organic sales growth was likely to come in at the high end of the guidance range of 3%-4% for 2018. Santi's reply: "[T]o the extent things continued on the path of run from the standpoint of the macro environment, I think the possibility is good that we would certainly be in the high end of that range." That gives a lot of confidence.

The U.S economy and industrial production are set to improve notably in 2018, and that's good news for multi-industrials such as Illinois Tool Works and 3M Company. The question is whether the stocks are a good value right now.

All told, any kind of slip-up in management execution would be likely to hurt margin growth. In addition, any unexpected slowing in the economy would negatively affect the assumption that Illinois Tool Works is set for growth at or above its guidance range for 2018. Given the rich valuation of the stock, it's hard to argue that the potential return outweighs the downside risk. Management is doing a fantastic job, and Illinois Tool Works is a great company, but that doesn't mean the stock is a good value right now.