One of these stocks seems like a golden opportunity -- the other one, not so much.

Up more than 12% in 2017, the rise in the price of gold could be attributed to a number of factors, such as the political uncertainty that permeated Washington this past year. And though some of those issues -- like the revised tax legislation -- have been settled, the fog of uncertainty still lingers suggesting gold may continue climbing higher in 2018. Now, consequently, seems like an ideal time to turn our attention to two popular gold miners: Yamana Gold (AUY -3.93%) and Eldorado Gold (EGO -5.47%).

Although the market writ large had an increased appetite for the yellow stuff in 2017, both Yamana and Eldorado lost some luster in the eyes of Wall Street; analysts downgraded the former three times and the latter seven times throughout the year. But that doesn't mean Main Street's investors should also forsake the companies, so let's weigh the two against each other to see which presents the better buying opportunity. 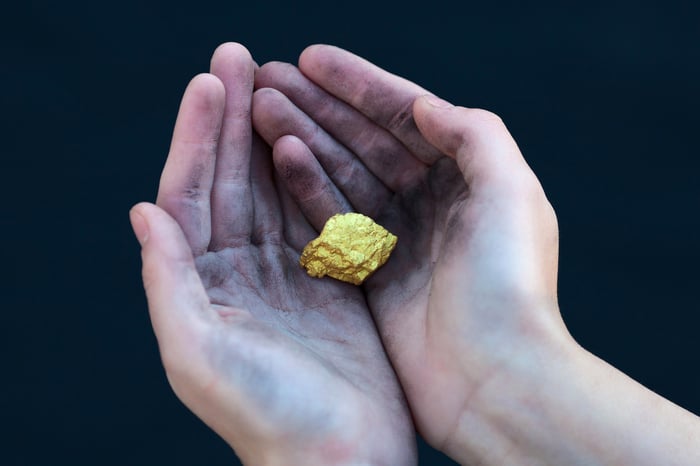 A brief meet and greet

Maintaining a portfolio of assets solely located in the Americas, Yamana relies primarily on the production of gold -- from one mine in South America and five in Canada -- though silver and copper also contribute to the company's top line. According to the company's most recent annual report, gold accounted for 82.4% of revenue in fiscal 2016, while silver and copper accounted for 6.3% and 11.3%, respectively. Conversely, Eldorado operates only two gold-producing mines, both of which are located in Turkey. In addition, the company operates an iron ore mine in Brazil and a silver-lead-zinc mine in Greece.

The companies' footprints, though noteworthy, pale in comparison to their financials; therefore, let's compare the companies on some important metrics to gain better insight.

From this brief look, it seems that neither company glitters too brightly, so let's grab our pickaxes and dig even deeper.

The initial look at Yamana may suggest that it's less than attractive. This conclusion, however, is misguided, for the company offers some compelling reasons for investment. For one, Yamana is nearing the commencement of gold production at its Cerro Moro mine in Argentina. The project, which remains on schedule and on budget, is expected to begin operations in the coming months; moreover, management forecasts fiscal 2018 gold and silver production of 80,000 ounces and 4.5 million ounces, respectively. As operations ramp up, management foresees gold production rising to 130,000 ounces and silver to 9.9 million ounces in fiscal 2019.

Besides promising growth prospects, management's commitment to securing the financial health of the company strengthens the argument in support of Yamana. The company (which hasn't reported fiscal 2017 earnings yet) reduced its total debt more than 22% from fiscal 2014 to 2016. During an investor presentation from last October, however, management estimated it would end fiscal 2017 with a net debt-to-EBITDA ratio of 2.8; in addition, it identified a short-term ratio of less than 2.0 and a longer-term ratio of less than 1.5. 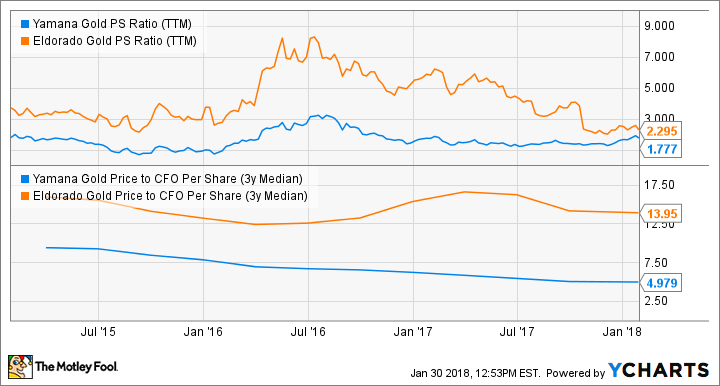 Both in terms of sales and cash flow, Yamana's shares are much more attractively priced than those of Eldorado.

The case for Eldorado Gold

It's not easy to substantiate the claim that Eldorado offers a better opportunity than Yamana. There's a cloud of uncertainly lingering around Eldorado at the moment: The company is in arbitration proceedings with the Greek government regarding the company's Skouries project. Successful execution of the project, which is located in northern Greece, is important to the company's future growth. Management estimates Skouries could have a mine life of 25 years, during which time it could produce 3.1 million ounces of gold and 1.47 billion pounds of copper. Eldorado expects the proceedings to conclude in early April.

The trouble in Greece and lackluster gold production, in addition to the stock's steep price tag, suggest there's plenty of reason to watch this company's story unfold from the sidelines.

Investors should still monitor the progress at Cerro Moro. Failure to execute the project could compromise the company's near-term growth, since the company has eschewed acquisitions and opted for growth through organic means.