Please ensure Javascript is enabled for purposes of website accessibility
Log In Help Join The Motley Fool
Free Article Join Over 1 Million Premium Members And Get More In-Depth Stock Guidance and Research
By Jamal Carnette, CFA - Feb 5, 2018 at 10:45AM

Since the election of Donald Trump, one sector of the S&P 500 has been notably absent from the subsequent stock rally. Versus S&P 500 returns of 33%, large telecommunications firms Verizon Communications (VZ 0.95%) and AT&T (T 1.65%) have returned 14% and 1%, respectively. Perplexingly so, as this sector will disproportionally benefit from the president's signature tax cut legislation. As such, telecommunications providers remain true value plays.

Now, we may be learning why investors have an aversion to the sector. According to a bombshell report from Axios, the Trump administration is considering nationalizing the wireless industry to compete with other countries, most notably China, which the report notes "has achieved a dominant position in the manufacture and operation of network infrastructure." 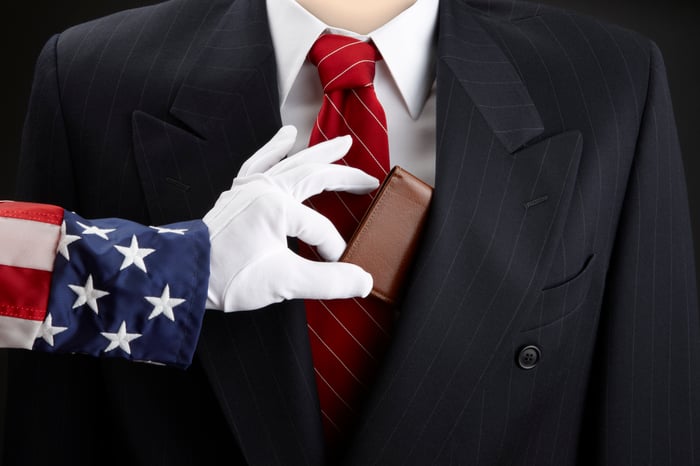 You have two options, but you can only pick option one

Per the document, there are two options for the nationalization of 5G communications. The first: The U.S. government pays for and builds the single network. The second option: Wireless providers build their own 5G networks that compete. According to Axios, though, "option two is not really an option at all," and it states that "a centralized network" is what's needed to compete with China.

Option one is the more problematic choice. Per the memo, option one would entail having the federal government build out the network and then rent access to AT&T, Verizon, and T-Mobile, although rate access fees were not discussed in the article. In the short run, this could be a positive for 5G rollout if the U.S. government picks up the tab for the capital expenditure build-out, but would most likely come at the expense of long-term innovation.

As for investors, it would most likely be the most disruptive to Verizon, which has for years sold its superior network as what differentiates it from  AT&T and T-Mobile. In the event a national 5G network is built with equal access for all wireless providers, then Verizon loses its advantage, and all providers will need to compete on price.

Option two isn't much better, as it appears the federal government would get involved with project planning for private industry, as the memo wants a build-out within three years with no concerns about project profitability. This comes as the telecommunication industry is still struggling to justify the collective $275 billion in capital expenditures for 4G, as it has failed to produce significant returns. Essentially, it appears the Trump administration wants to convert the telecommunications sector to another public utility.

Still in the planning phases

In fairness to the Trump administration, there are benefits to other stakeholders from this potential action. The first is universal access to lightning-fast 5G. Rural areas, aka "Trump Country," continue to fall behind cities and urban areas in high-speed internet access, which hampers the ability to lure 21st-century companies and jobs to those areas.

Second, the memo raises pertinent points. It's likely the economy of the next 20 years will rely heavily on big data, artificial intelligence, driverless cars, the Internet of Things, etc. The amount of data transmitted will be immense, and waiting for wireless providers to decide if it's profitable for them to build out the network, and where to build it, will continue to hurt us as an innovation-driven economy.

It's important to note this plan is still in the embryonic phase, and most Washington plans rarely make it into laws and/or rulings. Additionally, it's likely this idea will face considerable opposition, most recently from Trump's appointed FCC commissioner, Ajit Pai. However, telecommunication providers and their investors should watch these actions closely because it's likely any governmental interference will lead to losses in the sector.