Please ensure Javascript is enabled for purposes of website accessibility
Log In Help Join The Motley Fool
Free Article Join Over 1 Million Premium Members And Get More In-Depth Stock Guidance and Research
By Lou Whiteman - Feb 6, 2018 at 6:47AM

It was a poor time for a failure, given recent headlines that have Hawaiians and lawmakers on edge, but Raytheon and its systems are still part of the answer when it comes to missile defense.

A Raytheon (RTN)-built ballistic missile interceptor failed to hit its target in a test over Hawaii on Jan. 31, a second failed test for the Standard Missile-3 Block IIA program in recent months. It's a setback both for the missile and the company at a time when worries over the threat of incoming missiles are at a post-Cold War high, but there's still plenty of reason for optimism for both the program and the company.

The U.S. Missile Defense Agency on Thursday confirmed that a live-fire missile flight test launched from the Pacific Missile Range Facility in Hawaii failed to accomplish its primary objective, which was "to intercept an air-launched intermediate-range ballistic missile target." 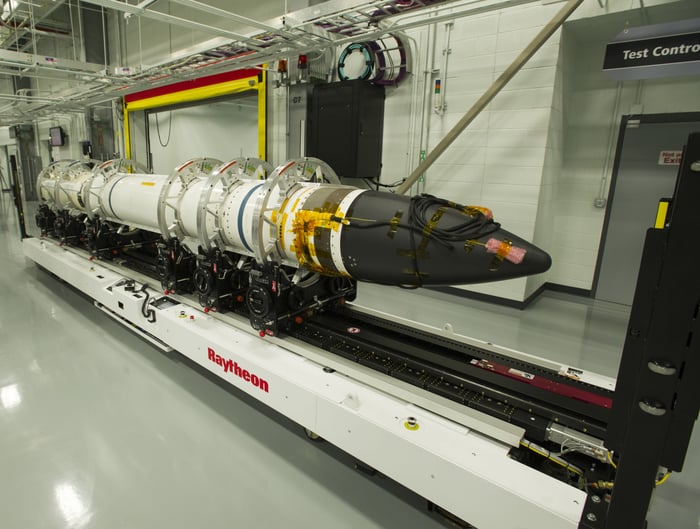 This was the third test in the past year for the SM-3 IIA program. In the first, conducted last February, it was successful in intercepting a ballistic missile target. But a second attempt last June failed, with the Pentagon eventually determining that a sailor inadvertently pushed the wrong button and directed the interceptor to self-destruct before it hit its target.

It's not yet clear what went wrong during the latest test. There are reports, however, that this time the missile simply failed to hit its target. Coming just weeks after a missile scare in Hawaii and amid increasing tensions on the Korean Peninsula, the result is likely to get significant attention. The SM-3 is billed as a key part of the defense against the threat of North Korea's Hwasong-12 and other ballistic missiles, as well as threats elsewhere against the United States and allies in Europe and Asia. The Japan Ministry of Defense has partnered with the U.S. on the development of the SM-3 missile.

Raytheon was awarded a $614.5 million contract by the U.S. government last August to develop the SM-3IIA, with potentially more revenue to follow if the program can prove its worth.

The Missile Defense Agency in a statement said it didn't consider the test to be a complete failure, noting that several firsts were accomplished. It was the first time the missile was launched from the land-based Aegis Ashore complex, and the first time both ground- and space-based sensors were used to remotely prompt the launch of the interceptor.

"We always make progress every time we conduct a test," Missile Defense Agency director Lt. Gen. Sam Greaves said in a statement. "While we are disappointed that we did not demonstrate a successful intercept, we did demonstrate significant advances in capability and collected valuable test data that will allow us to further improve our capability and capacity of the ballistic missile defense system."

Indeed, these failures are unlikely to discourage the Pentagon from continuing to develop next-generation missile defense systems. Lockheed Martin (NYSE: LMT) CEO Marillyn Hewson noted on her company's call with analysts last week noted that the continuing resolution lawmakers passed in December included about $4 billion in emergency spending for missile defense, a sign that threats from North Korea have gotten Washington's attention.

The Pentagon could determine that the failure came not from the missile, but from one of a number of complex radar and control systems also involved in the launch. Regardless, given the rising threat of incoming missiles and the importance of missile defense to both the United States and Japan, there is little chance this failure will cause the Pentagon to abandon work on the project.

Raytheon: Part of the answer

Shares of Raytheon are up 44.9% over the past year, in large part because of the company's sensor and missile expertise and the important role the company will play in defending against future threats. Absent some finding that the failure was caused by a fundamental design error in the missile -- which seems highly unlikely -- this latest incident will not affect Raytheon's standing with the government.

Raytheon after its share run-up is expensive, and incidents like this are a reminder that developing these new technologies is an arduous process and that the revenue that investors are anticipating will probably take years, and not quarters, to materialize. But long-term holders of the stock should feel just as comfortable with the investment today as they did before the failure.