BofI Holding, Inc. (AX -0.95%) stock gained 20.3% in January, according to data provided by S&P Global Market Intelligence. The online-banking company's share price gained ground after being named one of the best banks of 2018 by GoBankingRates and then spiked later in the month following strong second-quarter fiscal results.

GoBankingRates awarded BofI as one of 2018's top banks and put the company at the top of its "Best Checking Accounts in 2018" list, corresponding with a roughly 5% share price gain in the week's trading. 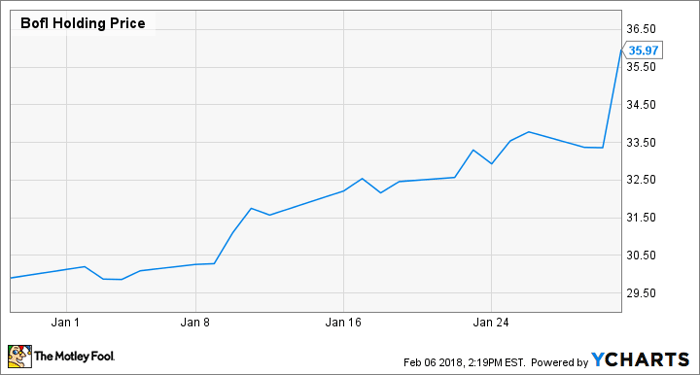 The company then released its second-quarter results on Jan. 30 and gained roughly 8% in the next day's trading session. Net income in the second quarter actually decreased 2% year over year due to one-time charges related to the Tax Cuts and Jobs Act that was passed at the end of 2017. However, adjusting for the $8 million in expenses related to the tax bill, earnings for the period were up roughly 22% year over year as the company's loan portfolio increased 15.6% over the prior-year period to reach $7.9 billion.

Management expects that the recent corporate tax cuts will be a sustained profit driver, and raised its long-term after-tax return on equity (ROE) target from 15% to 18% or higher. Most banks would be happy to hit an ROE between 10% and 12%, so the advantages of operating a strictly online-based business rather than having brick and mortar locations are already evident and could become more pronounced with time.

BofI's business model offers highly cost-effective scalability, and its relatively low operating expenses give the company the opportunity to offer lower interest rates than its major competitors. Priced at roughly 14 times forward earnings estimates, BofI Holding is an investment that has the potential to deliver great returns over the long term.