If you're a relatively new parent, it's never too early to start thinking about college. In fact, choosing the right investments now, early in a child's life, could go a long way -- perhaps even the entire way -- toward funding a child's secondary education. Since 1971, the cost of college has increased over tenfold. Even adjusted for inflation, the cost of college has increased over two-and-a-half times.

But fear not. Thanks to the power of compounding investment returns, 18 years of investment gains can make a big dent in the costs of college. And the further you are away from that first semester, the more you can afford to bet on a few small, disruptive, high-growth companies, the kind that have the best shot of returning 10, 20, or even 100 times your initial investment.

Of course, these types of stocks can also be very volatile year to year, often trade at high multiples, and carry considerable risk. However, if you are looking out a couple decades, you can afford to handle some near-term pain for a long-term gain. And since these are high-upside bets, you won't have to put down that much principal to get started. 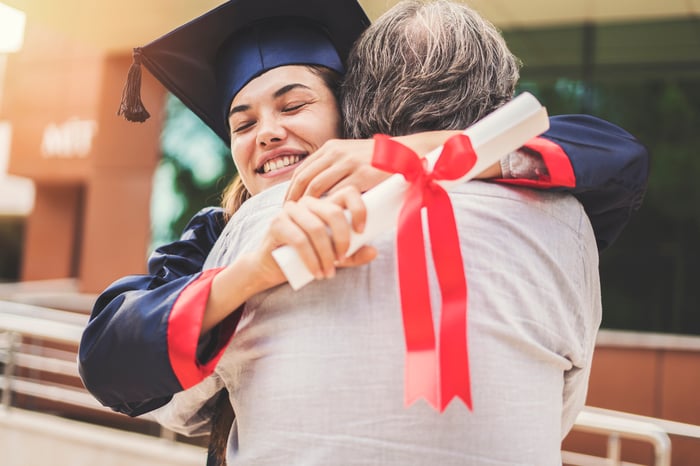 MongoDB (NASDAQ:MDB), which sports an $8 billion market cap, is looking to disrupt the database industry. The database is the core application where businesses store and organize all of their data. Therefore, it's an incredibly important part of the IT stack, and also a very "sticky" business, since it's such a pain -- and quite a huge risk -- to migrate all of a company's data to another database.

MongoDB made a big splash in its industry with its open-source document architecture, which stands in contrast to the traditional relational database, which uses a row-and-column format. By putting data within a "document," information can be organized in a nonlinear way, which is more appropriate for today's various forms of unstructured data, such as social media posts.

As a first mover in document-based databases, MongoDB has caught on not only with small businesses willing to bet on a new technology but even with larger organizations that have typically relied on legacy giants such as Oracle. That's because MongoDB has done an excellent job of bringing enterprise-level security and functionality to its relatively new technology.

This all added up to eye-popping revenue growth of 66.7% last quarter, a rate you won't find at many companies. Though the stock is by no means cheap, trading at roughly 23 times sales, the overall database market provides huge opportunity. According to IDC, the global database market is projected to reach $63 billion by the end of 2020, compared with MongoDB's relatively paltry $346 million in trailing-12-month revenue, or just 0.5% market share.

Another disruptive stock is The Trade Desk (NASDAQ:TTD). Since the company's September 2016 IPO at just $18 per share, The Trade Desk has trounced growth expectations, and the stock has rocketed up to $237 as of this writing, good for a gain of 1,216% in just three years' time.

The data-driven, automated, and hyper-targeted nature of The Trade Desk's ad platform is a big change from the traditional advertising industry, where ad buyers manually buy ad space in large blocks with wide distribution, but in a less targeted way. Data provided by programmatic campaigns can also be analyzed in real-time, allowing customers to adjust their spending and targeting while a campaign is still in progress.

Though the stock isn't cheap at 63 times forward earnings estimates, The Trade Desk's winning product and open-ended growth opportunity could pave the way for big gains over the next two decades, even after its strong recent run.

Finally, you wouldn't necessarily think of a bank as a "disruptor," but disruption is what Axos Financial (NYSE:AX) is attempting to accomplish in the banking sector. Axos started off in the early 2000s as an internet-only bank called Bank of the Internet and made huge returns by targeting profitable niches, such as jumbo loans to wealthy homeowners who didn't have traditional employment income, all while keeping costs low by not having physical branches.

As large banks have followed the trend of closing branches and innovating technologically, Axos changed not only its name in late 2018 but also its strategy. Through investments and bolt-on acquisitions, Axos has diversified into highly profitable commercial and industrial loans, commercial lending, and other new products. In addition, the company purchased WiseBanyan robo-advisory services, COR Clearing services, and Epiq, a bankruptcy trustee business, just in the past year. In addition, Axos lowered its costs of funds by buying $2.5 billion in low-cost deposits from Nationwide Bank.

Axos is tying all of these services together underneath its Universal Digital Bank, an internally developed software system that links all of Axos' products and services, as well as those of third parties, with a big-data mass-customization engine.

The UDB and other acquisitions have taken quite a bit of investment and have slightly lowered Axos' industry-leading margins in the past couple of years. That could be why this bank trades at just an 11.2 P/E ratio with a mere $1.76 billion market capitalization, putting it firmly in the small-cap space.

However, during its last conference call, CEO Greg Garrabrants hinted that the company will slow its pace of hiring next year. That could pave the way for more profitable growth ahead. And over the long term, Axos' proven leadership and tech prowess should allow it to keep taking market share in the banking industry for years to come. Given its small size and low valuation today, the longer-term certainly seems bright for this innovative bank.