Please ensure Javascript is enabled for purposes of website accessibility
Log In Help Join The Motley Fool
Free Article Join Over 1 Million Premium Members And Get More In-Depth Stock Guidance and Research
By Matthew Cochrane - Feb 14, 2018 at 8:15AM

Corning's spending might be up with little to show for it right now, but by the second half of the year, new projects coming online should help boost production -- and profits.

When Corning Inc (GLW 1.08%) reported its 2017 fourth-quarter earnings, shares immediately plunged and are currently down almost 12% from previous highs. Obviously, when shares plunge by that much immediately after earnings, something spooked investors. And, at first glance, it's easy to see how one might characterize Corning's quarter as decidedly mixed.

In the fourth quarter, core sales rose to $2.74 billion, a decent 7% increase year over year, but core earnings dropped to $485 million, a 9% decrease. Looking at the company's two largest divisions, display technologies and optical communications, reveals possible further cause of concern.

Corning's display technologies segment produces a special glass substrate used in LCD screens and is the source of most of the company's revenue and earnings. Margins in this division have been pressured lately due to declining glass prices, though the company believes this concern is moderating. Core earnings in this division decreased 20% to $221 million. 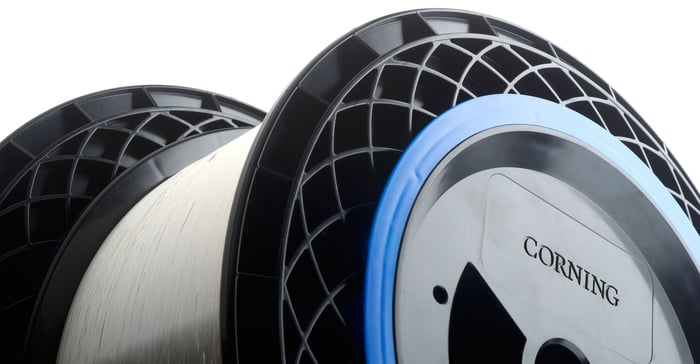 What is Corning spending all this money on? In the company's conference call, CEO Wendell Weeks said:

In other words, while these investments are not yet increasing production or earnings, they should be a real boost for Corning as soon as the second half of this year.

As the conference call progressed, management shined a brighter light concerning where this money was going. In China, Corning recently opened its new Gen 10.5 LCD glass fabricating facility and is now "the only manufacturer to have successfully scaled glass production to this size." With the new facility, Corning believes it can stabilize returns in its display division and win customers in new categories.

Corning recently opened a plant in North Carolina and acquired 3M Co.'s optical fiber division for about $900 million to augment its production of fiber-optic cable. The best part about expanding capacity for this segment is that Corning isn't building out based on hypothetical projections, but just trying to keep up with customer orders. In early 2017, Verizon Communications Inc agreed to purchase more than $1.05 billion of optical solutions over a three-year period. This quarter, Corning announced another deal with Saudi Telecom for an undisclosed amount.

Management insists this additional capacity is already spoken for. Remember, in 2017's first-quarter conference call, Weeks said, regarding optical fiber, "If we had more, we could sell more." Since that proclamation, Corning has done everything it can to ensure it has more.

Chief Strategy Officer Jeff Evenson mentioned that the company's capital expenditure spending also includes "capacity for gas particulate filters, plus development for Gorilla Glass and Valor, and other projects that we're not quite ready to dive into publicly."

I remain convinced that the principal reason for Corning's sell-off is that earnings will remain light for the first half of 2018 as the company ramps up its investments in crucial areas of its business. With so many projects underway, the company's expenses have spiked. Yet as soon as these projects begin to be finalized, not only will expenses ramp down, but production will increase. The recently finished projects coming online, like its new fabricating plant in China, should also improve margins, thus boosting earnings with the double advantage of increased sales and profitability.

While there is always a risk when companies build out capacity and demand is less than expected, I don't believe this to be the case here. Corning has signed deals with major businesses and seems to have a good handle on the industry's demand for its products. If investors take a long-term outlook and adopt a little patience, I believe they will be rewarded.