Please ensure Javascript is enabled for purposes of website accessibility
Log In Help Join The Motley Fool
Free Article Join Over 1 Million Premium Members And Get More In-Depth Stock Guidance and Research
By Rich Smith - Feb 19, 2018 at 5:03AM

Could Jeff Bezos and Blue Origin succeed where so many others have just failed?

Three years ago, we asked: "Which private company will be first to get to the Moon" and win the coveted Alphabet (GOOG -0.27%) (GOOGL -0.21%)-sponsored Google Lunar XPRIZE competition?

One year ago, we narrowed down the list of finalists to just five companies: Israel's SpaceIL, America's Moon Express, Indus from India, Hakuto from Japan, and Synergy Moon, an international alliance hailing from just about everywhere.

Last month, at long last, we learned the answer: Which of these private companies will be first to land on the Moon? 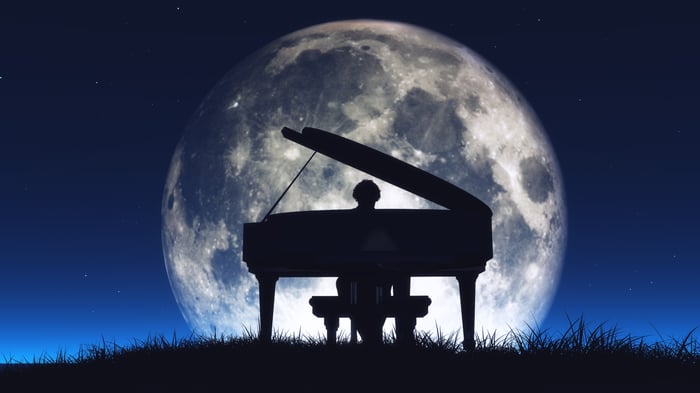 In theory, the Google Lunar XPRIZE competition should have already wrapped up with one or more of the five companies having landed a robot on the Moon. With the clock ticking down on 2017, however, the organizers of the Alphabet-backed project extended the Lunar XPRIZE deadline into 2018 -- to the end of March.

Turns out even that wasn't enough. Difficulties with raising the funds needed to finance a Moon landing attempt combined with technical hurdles and "regulatory challenges" continually tripped up the timeline. In the end, XPRIZE organizers Peter Diamandis and Marcus Shingles issued a joint statement last month terminating the Google Lunar XPRIZE contest: "After close consultation with our five finalist Google Lunar XPRIZE teams," they said, "we have concluded that no team will make a launch attempt to reach the Moon by the March 31st, 2018 deadline."

What it means to Alphabet -- and everyone else

So it seems Alphabet's Google unit is going to hang onto its $30 million grand prize purse. And yet, XPRIZE says it's still open to keeping the contest alive -- maybe with a new sponsor, or maybe with no monetary "prize" at the finish line.

After all, it's not like the money was the primary incentive of this contest. As XPRIZE notes, teams competing for the Lunar XPRIZE "raised more than $300 million through corporate sponsorships, government contracts and venture capital" in the course of trying to win the competition. With a grand prize of only $30 million waiting at the finish line, none of these companies was going to make a profit by winning the Lunar XPRIZE.

Rather, other goals were set -- and achieved:

These were the real objectives of offering a handful of millions of dollars as a reward for sending a privately financed spaceship to the Moon.

And we may get there yet -- maybe not this year, but soon. As Diamandis and Shingles noted, "we are inspired by the progress of the Google Lunar XPRIZE teams, and will continue to support their journey, one way or another, and will be there to help shine the spotlight on them when they achieve that momentous goal" of landing on the moon.

Meanwhile, other companies, unconstrained by artificial deadlines and with no lack of funds, may take up the quest. Indeed, just one day before XPRIZE officially called a halt to its contest, on January 22 Blue Origin (the space venture backed by Amazon.com (AMZN 3.15%) founder Jeff Bezos and financed by sales of Bezos's Amazon.com stock) put out this tweet:

Blue Moon is designed to fly on any launch vehicle, including SLS, Atlas V, Vulcan and New Glenn. Delivering large payloads to the lunar surface, Blue Moon can help put astronauts on the moon -- this time to stay. #BlueMoon #Apollo50th pic.twitter.com/sUTXuvFFA4

Bezos very much wants to see NASA return to the Moon -- preferably after hiring Blue Origin to help it get there. His Blue Origin space venture is hard at work designing a new lunar lander -- "Blue Moon" -- that could fly atop any of NASA's current or future rocketships (designed by Boeing and Lockheed Martin).

Just in case NASA doesn't provide funding, though, Blue Origin is building a monster rocket of its own, dubbed the "New Glenn," that should also be powerful enough to carry Blue Moon to the Moon. Granted, at last report, Bezos didn't think the lander would be ready for service before July 2020. Then again, it's starting to look like the several tiny start-ups that arose to vie for the Google Lunar XPRIZE -- and should have arrived at the Moon already -- might not get there before 2020, either.

Long story short? The Google Lunar XPRIZE is history, having ended without a winner. But a new space race may be just beginning, one in which multiple tiny, funding-challenged start-ups race against Amazon-backed Blue Origin to see who can get to the Moon first.

This everyone-versus-Amazon contest could be even more entertaining to watch than the original Google Lunar XPRIZE.