The decking and railing manufacturer just finished another record year. Here's a closer look at what's working so well for the company.

Trex Company Inc (TREX -2.27%) reported its fourth-quarter and full-year 2017 results on February 21, marking its fifth-consecutive year of record sales and profits. Total sales were up 28% to $122 million in the fourth quarter, and up 18% for the full year to $565 million. Earnings increased 44% to $0.62 per share in the fourth quarter, and 41% to a most-ever $3.22 per share for the year. A healthy economy and housing market has certainly spurred the company's results in recent years, but that's only part of what has driven Trex's success.

Since the Great Recession, the leading manufacturer of wood-alternative decking has taken major strides in multiple areas of its business, including product quality, operating efficiency, and market share growth. Three key things continue to stand out for Trex: rigorous operating efficiency; brand and marketing success; and effective capital allocation supported by its strong cash flows and balance sheet. Let's take a closer look at the company's results, and how the things above continue to drive its incredibly successful run. 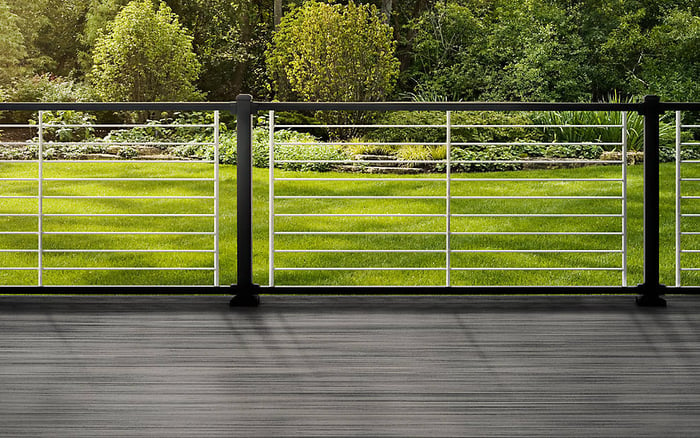 Trex's fourth-quarter and full-year results were partly driven by the third-quarter aquisition of SC Company, now Trex's commercial products segment. But even without the gains from this new segment, Trex delivered strong growth. Sales from its residential products segment, which includes decking and associated railing and lighting products, were up 15% in the fourth quarter and 13% for the full year.

Trex has benefited from lower prices for polyethylene sheeting -- a major ingredient in its decking -- over the past couple of years, but a concerted effort to drive higher throughputs from its lines without adding incremental operating expense has also played a big role in margin improvements. And management says they expect to continue finding ways to drive costs down and output up.

On the earnings call, CEO Jim Cline said the company is implementing production line enhancements that "not only [provide] material expansion of our decking capacity, but also [drive] significant cost savings that we will begin to realize in the second half of 2018."

Since 2016, Trex's marketing has primarily focused on touting the superior nature of its decking versus wood. This was a change from its prior marketing, which focused more on competing alt-wood products, but also a strategy to build on the company's success in establishing strong Trex name recognition. While it may not have the household recognition of "Kleenex," it has started to become synonymous with wood-alternative decking.

Trex changed gears on its marketing message for one reason: addressable market opportunity. At latest count, Trex commands just under half of total alt-wood decking sales in North America, but only about 8% of total decking volume. Wood commands well over 80% of board-feet of decking sold, and management says every percentage point it can take away from wood is worth $50 million in sales. That's nearly 10% in revenue growth in residential products for every percent it takes from wood.

On the call, Cline said there's evidence this is paying off:

Current industry data can be hard to come by, but it's safe to say that our industry continues to gain share from the dominant wood market. As a brand leader with our targeted advertising and marketing campaigns, we are confident that Trex is gaining a significant share of this conversion from wood. Our website analytics for full-year 2017 told the story and support our confidence in future growth. Traffic to the purchase indicator areas of our website drove a double-digit increase compared to 2016. Data coming from our markets outside of North America was even more robust.

Here's an example of how handy the company's cash flows are: Trex ended the second quarter with $111 million in working capital, and then proceeded to spend $71.5 million to acquire SC Company in the third quarter. Fast-forward to the end of 2017, and Trex's balance sheet added $20 million in working capital -- mainly in cash and inventory gains -- since the acquisition was completed.

It's still early in the Commercial Products story to know how this new segment will pay off in the long term, but the early results offer evidence that it could pay off in unexpected ways. On the earnings call, Cline stated that its Commercial Products engineering team helped accelerate the development of new railing products for its residential product segment, "[bringing] that product to market in about one-third of the time that it would have taken us without the combined support of the commercial and residential engineering teams."

Here is Trex's history of returns on invested capital: 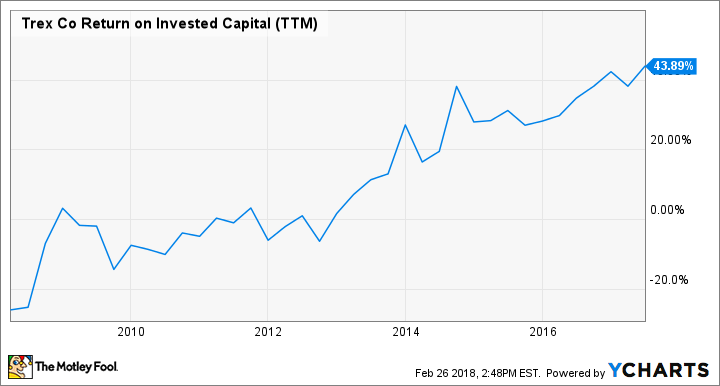 Management says one of the areas where it sees opportunity to implement manufacturing improvements in is Commercial Products. This segment generates lower margins than residential decking, and is also more "lumpy" due to the less predictable nature of orders, which can be significant in nature and part of very complex projects (like a professional sports stadium) where railing is only one small part. Nonetheless, the minimal need for capital investments, as well as the prospects to improve returns, have management optimistic that this business will pay off very well over time.

For the first quarter, guidance is for $157 million in Residential Products sales and $15 million in Commercial products for a total of $172 million. This compares to $144.8 million in total sales in the first quarter of 2017, before Trex acquired SC Company. The company also expects an effective tax rate of 25%, down from 33% in 2017 due to the lower federal tax rates signed into law late last year.

With a generally healthy economy and strong interest in home-improvement projects, 2018 is on track to be another record year for Trex.

Why Trex Stock Spiked to an All-Time High on Tuesday

Why Trex Stock Slumped This Week but Could Rebound