Ford Motor Company (NYSE:F) said that its U.S. sales fell 6.9% in February from a year ago, as good results for its F-Series pickups weren't enough to offset big declines in sales of most Ford and Lincoln cars and SUVs.

Ford had plenty of company at the declining-sales table in February. General Motors' (NYSE:GM) sales were also down 6.9%, while Fiat Chrysler Automobiles' (NYSE:FCAU) slipped 1%. 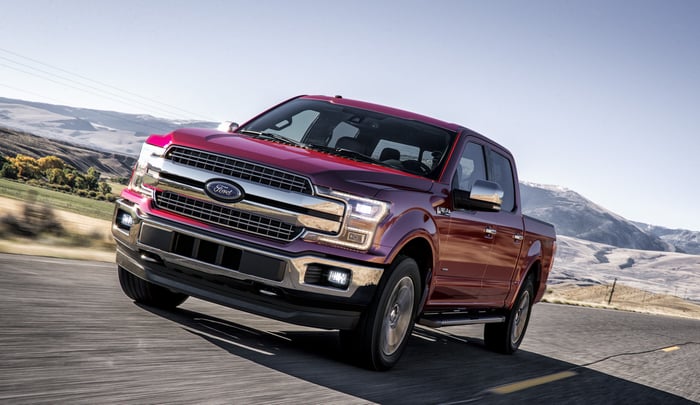 Ford gave its huge-selling F-150 pickup an overhaul for 2018 to keep it fresh. It's working: Sales were up last month, while sales of both rivals fell. Image source: Ford Motor Company.

How Ford's U.S. sales stacked up against rivals in February

Here are February's sales totals for the six largest-selling automakers in the U.S. market. Of the six, only Toyota (NYSE:TM) managed a year-over-year gain, as its all-new Camry bucked the sedan-slump trend.

The takeaway: Ford's freshest products -- the Navigator and Expedition, the F-Series Super Duty pickups, and the just-refreshed F-150 -- are still generating sales growth and commanding strong prices. Everything else, not so much.

Why Ford has been losing ground to rivals lately

Ford has been losing ground to rivals for a few months now. There appear to be two reasons for that:

The first point is just a fact of life: Right now, Ford is in an awkward place in its product cycle. Its entries in hot segments (compact and three-row SUVs, for example -- the Escape and Explorer) are nearing the ends of their lives, and rivals with newer products are stealing sales.

The second point is laudable from a bottom-line perspective: Holding the line on incentives helps to preserve Ford's margins. It has been Ford's policy for roughly a decade, since the days of CEO Alan Mulally, to "match production to demand," reducing supply rather than cutting prices. (That cuts both ways: Ford is increasing production of the Expedition and Navigator.)

According to figures from TrueCar subsidiary ALG, Ford was one of only two major automakers that didn't increase incentives in February. (Honda was the other.)

Buyers are still paying up for fresh new products

Across the U.S. market, it's the new products that are drawing buyers and getting strong prices. Kelley Blue Book analyst Tim Fleming said that despite slipping overall sales, pricing on fresh new products has remained strong -- even in weak market segments:

The numbers indicate that new-car buyers are still willing to pay top dollar for the latest models with the most current features and technology. Even the new Honda Accord and Toyota Camry are commanding large premiums over their predecessors, despite competing in a rapidly shrinking segment.

The takeaway for Ford investors: Ford may be suffering more than some rivals because of the relative age of most of its product line -- but broadly speaking, its results mirror the overall industry's trends at this stage in the market cycle.