The stock market has been volatile recently, to say the least. Still, there are several notable companies that have not only weathered the early 2018 storms but also managed to increase substantially in value. This quartet of popular stocks has each risen by over 40%, which would be an accomplishment even in a consistent bull market.

Which four are these? Read on to find out. 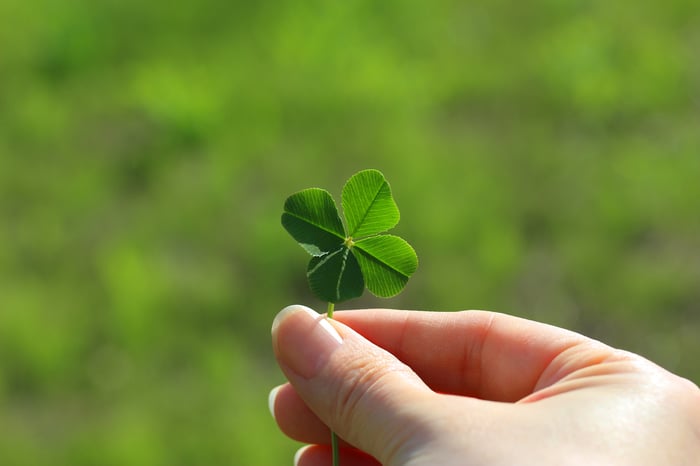 I'll be honest; I was skeptical of the strategic shift Netflix (NASDAQ:NFLX) underwent earlier this decade. Moving from a core of traditional content produced by Hollywood studios to a lineup heavy on the originals was a lousy idea, thought I. Who, after all, would forgo Lost or Young Frankenstein for a Netflix-only TV show or movie?

Many, many people, it turns out. Attracted by a blizzard of fresh content, users around the world just keep signing up for Netflix. In fiscal 2017, the company's streaming services subscriber count hit 117.5 million, a robust 25% year-over-year increase. The rise in annual revenue was even better, at 32% to $11.7 billion.

It seems that upping the original content juices subscriber growth. That's surely a key reason the stock continues to rise -- it's up an astonishing 64% in 2018, as of this writing. Happily for Netflix bulls, the company aims to spend a hefty $7.5 billion to $8.0 billion this year alone on proprietary TV and films.

In its Q4, Grubhub posted stellar sales growth of nearly 50% to slightly over $205 million, with adjusted net income rising almost 70% to $33 million. The active diner count leaped 77% higher to 14.5 million souls. Looking forward, the company estimates that the total market for takeout and delivery in the U.S. is around $200 billion, compared with $75 billion in 2014.

On top of that, Grubhub recently signed a deal with Yum! Brands to effectively be the delivery arm of that company's KFC and Taco Bell restaurants, although the parties didn't specify exactly how many of those KFCs and Taco Bells would be included.

As part of the arrangement, Yum! Brands is purchasing $200 million in Grubhub stock -- a big vote of confidence from a major food industry player.

So far this year, Grubhub's stock price has risen by 42%. That puts it well into all-time high territory.

The recent popularity of Herbalife (NYSE:HLF) appears to come from the confluence of two very positive recent factors.

The immediate one is the departure of Bill Ackman's Pershing Square hedge fund, which earlier this year basically retreated from its long campaign to short the life out of the stock. The market didn't see Herbalife quite that negatively, and the stock went up instead of down. That outcome probably made Ackman's effort too expensive to maintain.

The profit was made on the back of top-line growth that rose by 4.6% on a constant-currency basis to $1.1 billion, mainly thanks to strength in the Europe, Middle East, and Africa region; China; and Latin America. A global company, Herbalife draws sales fairly evenly from around the world -- each of its regions contributed between 10% and 21% to its total sales in Q4.

Herbalife stock is full of life so far in 2018. It has risen by a shade over 40% since the start of the year.

Diet fads come and go, but it's a tough old traditionalist, Weight Watchers International (NASDAQ:WW) that has been the hot weight-loss stock since New Year's.

The involvement of megapopular Oprah Winfrey, who bought a big stake in the company in 2015, was a help. Yet the stock wouldn't have shot into the air if it wasn't for good fundamentals.

Weight Watchers has grown its number of subscribers substantially, by 23% to 3.2 million, at the end of last year. This growth has cranked up revenue, which advanced by 17% in Q4 to hit $312 million. Net profit is also heading north, increasing nearly fivefold in Q4 to $63 million, trouncing analyst expectations.

That top-line growth was the eighth quarter in a row of improvements. It also indicates that the company's relatively traditional approach to dieting is resonating with its target audience and is durably popular.

A planned push into wellness offerings feels like a smart move in an increasingly health-conscious world, and I'd imagine the company will find a way to translate that into higher revenue and profit.

It's already translated its recent successes into a richer share price. In spite of a recent pullback, the stock has increased by over 40% year to date.

As with any news of stock price stardom, we should remember that trailing outperformance does not necessarily mean forward success. That goes double in a period of market volatility. Still, all four of these companies have solid fundamental underpinnings and potential for more growth in the immediate future. They're well worth keeping an eye on, particularly in these roller-coaster times.