Ambarella, Inc. (NASDAQ:AMBA) and NVIDIA Corporation (NASDAQ:NVDA) are both semiconductor companies, but that's pretty much where the comparison ends. NVIDIA makes graphics processing units (GPUs) that are used in the gaming, data center, and automotive markets, while Ambarella's chips are primarily used in wearable devices and drones.

NVIDIA's stock has skyrocketed over the past several years, and Ambarella's has failed to keep pace with the market. But recent share price gains and losses don't mean that a company is or isn't a good investment, of course, so let's take a closer look at each companies' financials, competitive advantages, and valuation to see which one is the better buy. 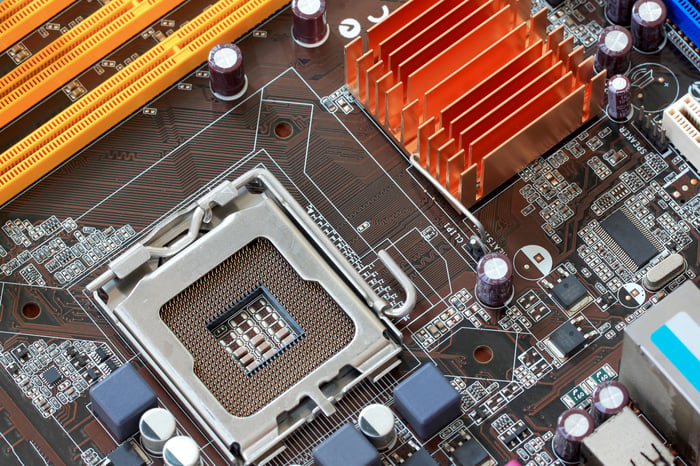 Both of these companies are in strong financial shape. Ambarella has no debt, and its cash and trailing-12-month free cash flow is strong, particularly for a company with a market cap of just $1.7 billion. NVIDIA is also doing well with its $7.1 billion of cash and its $2.9 billion of trailing free cash flow. NVIDIA does have $2 billion in debt, but that's not too much of a concern because of the company's ability to generate significant revenue (more than $2.9 billion in the most recent quarter) and its total cash on hand.

You should always want the company you're investing in to have some sort of advantage over its competitors that will be able to keep it ahead of the pack for years to come. Let's see if either company has that right now.

Ambarella makes systems-on-a-chip (SoCs), and in the past, the company sold most of them into GoPro's actions cameras. But as GoPro's sales have stumbled, the company has diversified into selling chips for drone maker DJI and into other Internet of Things (IoT) devices. The problem is that Ambarella doesn't have any technology that really sets it apart from other SoC makers.

NVIDIA does have some clear advantages over key rivals Intel (NASDAQ:INTC) and Advanced Micro Devices (NASDAQ:AMD). For example, at the end of 2017, NVIDIA's graphics processors commanded about 73% of the discrete GPU market share for computers, with AMD taking up the rest.

Investors should know that Intel is working toward making its own GPUs and is already integrating some of AMD's GPUs into its processors in an attempt to move further into NVIDIA's space. But while AMD and Intel could eventually catch up with NVIDIA's GPUs, NVIDIA has a solid lead right now that's allowing it to outpace its rivals -- far more than Ambarella is -- so I'm giving NVIDIA the win, here.

Finally, let's evaluate Ambarella and NVIDIA based on each company's current price-to-earnings ratio (P/E), their forward P/Es, a ratio that looks at future earnings projections; and the enterprise value-to-EBITDA ratio (which is earnings before interest, taxes, depreciation, and amortization).

Both companies have very high trailing-12-month P/E ratios and forward P/Es, compared to the S&P 500's P/E ratio of 25.7. Additionally, NVIDIA's EV/EBITDA is slightly lower than Ambarella's, but both are relatively high compared to the average 17 EV/EBITDA for the market.

Neither NVIDIA nor Ambarella are cheap by any standards right now, but the benefit from NVIDIA is that its share price is moving in the right direction. NVIDIA's stock has gained 145% over the past 12 months, while Ambarella's stock has slid about 6%. NVIDIA's shares are still relatively expensive, but considering that its shares are building wealth for investors -- and its core gaming business is growing -- I think it's easily the better bet here.

NVIDIA isn't impervious to rising chip competition from Intel and NVIDIA, and its shares are hardly a bargain right now, but compared to Ambarella, I think NVIDIA looks like a much better buy. Investors should keep in mind, though, that much of NVIDIA's share price gains have come as a result of the company's prospects in providing GPUs to the automotive market (for semi-autonomous vehicles), but that segment only makes up about 4.5% of NVIDIA's top line in the most recent quarter. That doesn't mean NVIDIA's share price gains are finished, but investors should know that it could take a long time for the company's driverless car tech potential to match up with its financials.