As regular readers of this column will be aware, I believe the Middle East forms one of the most lucrative and important export markets for defense contractors today. Flush with oil cash and perpetually embroiled in conflict, Middle Eastern countries surrounding the Persian Gulf in particular feel a growing need to keep their militaries in tip-top shape and equipped with the latest in 21st century military tech, just in case bad guys come knocking.

For years, this has been a market that Raytheon (NYSE:RTN) has excelled at supplying, and based on recent developments, it looks like Raytheon will continue to dominate the market for Middle Eastern weaponry for years to come. 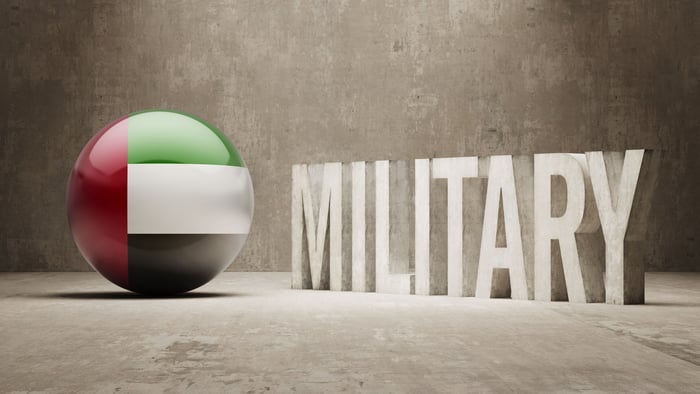 The United Arab Emirates is just one country shopping for weapons at Raytheon this month. Image source: Getty Images.

In each case, these contracts (totaling $467 million in combined value) should eventually convert into revenues on Raytheon's income statement. While so far the DSCA has only notified Congress of the requests to purchase military equipment and services, and technically Congress still needs to approve the requests, Congress has never in its history turned down an arms sale after receiving notification of it from DSCA.

Total cost of all this equipment (and total revenues for the prime contractor on the contract): $197 million.

The second and larger deal actually goes to a Qatari rival, the UAE, which is asking Congress to authorize its purchase of 300 AIM-9X-2 Sidewinder air-to-air missiles, along with related equipment such as training missiles ("CATMs"), guidance units, spare parts, and so on. The UAE presumably intends to use these missiles to arm its fleet of Lockheed Martin F-16 fighter jets, of which the nation has 55 in service already, and 30 more on order.

Now, by this point you may have noticed that the two Mideast customers that Raytheon will be selling military hardware to under these two notifications ... are currently not the best of friends. In 2017, the UAE cut diplomatic ties with Qatar, accusing the latter of being a state sponsor of terrorism. Tensions heightened late last year, and into early this year, in separate incidents in which Qatar accused UAE fighter jets of violating its airspace -- followed shortly thereafter by a UAE claim that Qatari fighters had intercepted UAE civilian airliners transiting Qatari airspace.

That sort of makes it sound like Raytheon is playing both sides in a potential conflict, which, while perhaps good for business, could be bad for PR. That being said, the fact that the DSCA is acting as intermediary in both these sales suggests the U.S. government may be offering the prospect of obtaining advanced U.S. weaponry as a means of forestalling actual conflict between Qatar and the UAE -- both of which presumably know that should a shooting war begin, arms sales to both sides could be cut off. So curious as it may seem, by selling weaponry to potential combatants, Raytheon may actually be contributing to peace and stability in the Middle East.

At an operating profit margin of 13.1% -- one of the three best profit margins that Raytheon has enjoyed in the past 10 years, according to data from S&P Global Market Intelligence -- that's a pretty good business to be in.