Ambitious cybersecurity company Palo Alto Networks (NASDAQ:PANW) will soon be one asset larger. The company announced that it has struck a deal to acquire Evident.io for $300 million in cash.

Evident.io specializes in security for cloud-based applications and services. Here's why Palo Alto Networks is paying a nine-figure sum to purchase it. 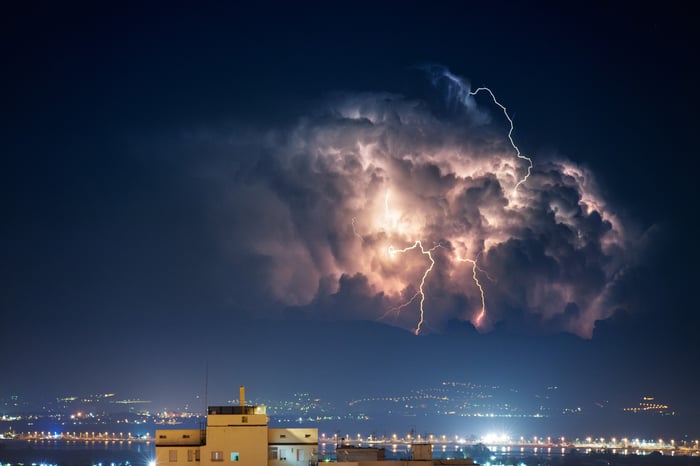 A clear vision of the cloud

Palo Alto Networks' big selling point is its ability to corral and integrate security functions across a wide array of software, hardware, and media. One increasingly important part of this ecosystem is the cloud -- i.e. programs and data sitting on remote servers instead of on a hard drive at your desk, or elsewhere in your building. Having Evident.io under its wing will increase Palo Alto's power and reach in the cloud.

Or, as CEO Mark McLaughlin put it in the press release announcing the purchase: "With Evident as part of our platform, Palo Alto Networks will be the only vendor that can deliver a holistic cloud offering to address the critical security needs of today's enterprise customers as they journey to the cloud."

According to the company, adding Evident.io's offerings will allow it to centralize various aspects of its cloud security solutions, including storage security, monitoring, and reporting, for its clients.

Evident.io is an established player in the cloud security segment. Its impressive client list includes top names in a variety of sectors, such as entertainment conglomerate Walt Disney, software maker Adobe Systems, and financial services company Capital One. Its technology partners include Amazon Web Services, and Microsoft's Azure cloud platform.

Evident.io is, however, a private company and doesn't make its financials public. Further, Palo Alto Networks provided no details about its asset-to-be's size or scope, nor did it specify how the integration of its purchase might impact results.

Regardless, it's quite clearly a complementary acquisition in a segment that still has plenty of growth in front of it. Consider Amazon Web Services as an example: That business unit produced year-over-year revenue growth of 45% in the e-commerce giant's fiscal Q4, up from the 42% it posted in the two preceding quarters.

Meanwhile, a glance at Palo Alto Networks' balance sheet reveals that it has plenty of dosh with which to swing the Evident.io buy, should it decide to fund it entirely with internal sources. At the end of its Q2, the company held $915 million in cash and equivalents; generally speaking, this was a strong quarter that saw it post notable rises in revenue and operating cash flow (although it's been consistently in the red on the bottom line for years).

All in all, this feels like an appropriate and opportunistic buy in a crucial segment, made by a company on the upswing. The cloud segment is only going to grow in importance, as will the necessity to make it as secure as possible.

Palo Alto Networks did not specify how it would fund the Evident.io acquisition. Although, as mentioned, it's well within its financial means. It expects to close the deal within this quarter.