Investors deserve more than the old set of ideas the java giant trotted out this week.

Starbucks (SBUX 1.62%) has been one of the best-performing stocks of the last generation as it's built a global coffee empire. However, its recent performance has been wanting. Over the last two and a half years, shares have traded sideways, gaining just 2% while rival McDonald's (MCD) has jumped 63% and the broad market has climbed 38%.

Starbucks' once-impressive stock growth has slowed as comparable sales and earnings growth has faded. After posting comparable sales growth of 5% or more better for more than 20 quarters in a row, same-store sales growth came in at just 2% in its most recent quarter, following a 3% increase in the fiscal year ended last October. The company also lowered its long-term earnings-per-share growth target from 15%-20% to 12%.

For investors counting on a new set of ideas to revamp the stock's performance, this week's shareholder meeting seem to primed to bring them. However, Starbucks simply touted the same set of growth initiatives it's been taking about for more than a year. 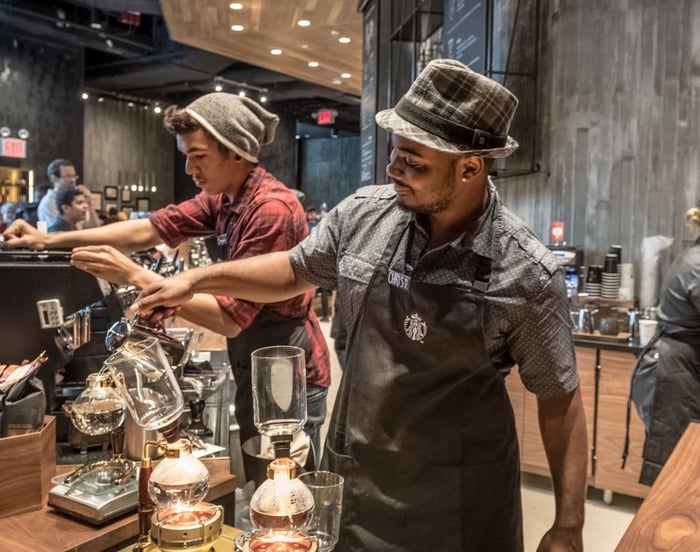 At its biennial investor conference in December 2016, Starbucks said future growth would rely on three primary growth drivers. First, it said its premiumization strategy through its Reserve roasteries and cafes would create a halo effect for the brand and attract customers that may have defected from Starbucks for so-called third-wave coffee shops, which tend to be independent and high-end. Second, the company saw growth through its "digital flywheel," with the Starbucks Rewards program and Mobile Order & Pay. Finally and most importantly, it aimed for rapid expansion in China, which chairman Howard Schultz predicted would one day be bigger than the U.S. market.

At the shareholder meeting, Starbucks reiterated those same growth initiatives, saying it intended to expand digital relationships by drawing in more customers to its Rewards program, adding new stores in China with a goal of reaching 5,000 locations by 2021, and focusing on premiumization with Reserve roasteries and cafes and the opening of stand-alone Princi stores, the high-end Italian bakery chain in which it's invested.

The problem with these initiatives isn't that they aren't working. After all, growth in China continues to strengthen, with comparable sales up 6%. Mobile Order & Pay now represents 11% of transactions in U.S. company-owned stores and added 1.4 million U.S. Rewards members in the last year, bringing the total to 14.2 million. On the most recent earnings call, Schultz said sales at the new roastery in Shanghai were 14 times higher than the average Starbucks store, adding, "We shattered every sales record in the history of the company."

It's just that they aren't enough to counteract other headwinds the company is facing. For instance, while comps were 6% in China, they only grew 1% in the China-Asia Pacific region, indicating weakness in other Asian countries, and comps fell 1% in the EMEA (Europe, Middle East, and Africa) region. Meanwhile, McDonald's recently revamped its McCafe line, which appears to be one of the factors driving the Golden Arches' strong growth. Cannibalization at Starbucks is also a concern as the average store now has 3.6 other Starbucks within a one-mile radius.

The next big idea

Even with those growth initiatives, Starbucks could still improve in other areas. For instance, restaurant chains across the board are looking to delivery to juice sales and provide more convenience to consumers who have gotten accustomed to getting whatever they want on the internet. As a coffee chain with high-frequency purchases, delivery should be a natural fit for Starbucks. However, it's made little mention of that opportunity in recent reports.

Starbucks launched its own delivery program in 2015 for customers in New York's Empire State Building but has yet to expand it. Its menu items are also available in some locations through third-party delivery apps like Postmates, Doordash, and Grubhub, but if Starbucks took control of delivery, it could fold it into its Rewards program and take more control of the process.

Food, as it has for a long time, also remains an opportunity. Starbucks' plan to open stand-alone Princi stores seems promising, but with only a few of them planned, it won't be enough to move the bottom line. COO Roz Brewer said at the conference that the company will expand its Mercato menu, which features freshly made sandwiches and salads, to more than 1,000 stores by the end of the year as part of its goal to double food sales by 2021. That move should have an impact, but it was not highlighted as a particular focus in the press release.

Starbucks doesn't necessarily need a new growth initiative. Growth of 2% in comparable sales and 12% EPS growth aren't bad, but it means its brightest days as a growth company may be coming to an end. With the stock still trading at a modest premium, growth will likely be restrained in the near future.