The NVIDIA (NASDAQ:NVDA) juggernaut continues to roll, as shares of the graphics specialist recently hit yet another high after analysts predicted that Steven Spielberg's upcoming movie, Ready Player One, will lift sales of graphics processing units (GPUs) by driving purchases of virtual reality headsets.Jefferies analyst Mark Lipacis estimates that NVIDIA stock can crack the $300 mark by next year as demand for parallel computing workloads powered by its GPUs increases. NVIDIA closed March 20 at $249.58 per share.

It won't be surprising to see NVIDIA sustain its terrific run thanks to the broad-based growth across its entire business. However, cracks have started emerging in certain areas for this high-flying tech stock. Let's take a look. 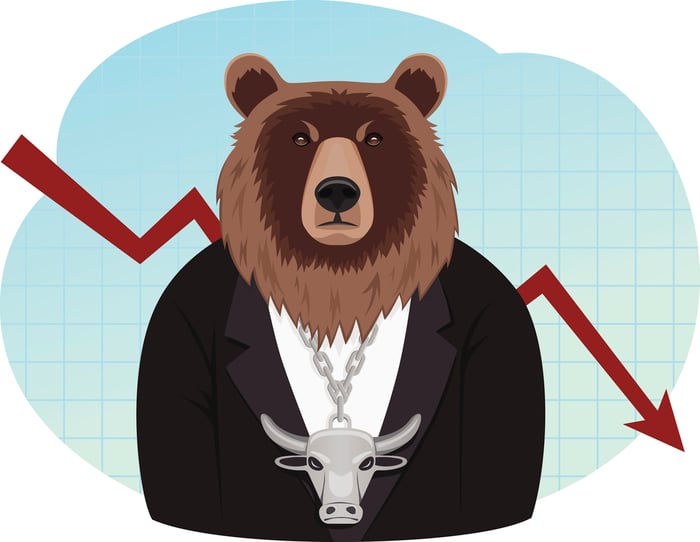 1. AMD is proving to be a handful in GPUs

Advanced Micro Devices (NASDAQ:AMD), NVIDIA's prime rival in the GPU space, has made slow and steady progress in this market. AMD held 29.5% of the GPU market at the end of 2016, but saw a rapid jump in sales last year that pushed its market share to 33.7%, according to Jon Peddie Research.

AMD has employed a smart strategy of undercutting NVIDIA's GPUs on pricing while offering almost identical performance. This strategy worked wonders for AMD in the midrange graphics card space, allowing it to start eating into NVIDIA's GPU lead. AMD's latest line of premium graphics cards fell behind NVIDIA's in performance, but it still managed to get an edge on the market leader thanks to cryptocurrency-related gains.

It is estimated that cryptocurrency miners bought $776 million worth of graphics cards last year, and AMD was reportedly the biggest beneficiary. Looking ahead, AMD management is confident of boosting its market share once again in 2018 by integrating its Vega GPUs in notebooks. It claims that over 40 new devices will hit the market in 2018 based on its Ryzen Mobile platform and is also ramping up production of its GPUs to meet an expected rise in cryptocurrency demand.

Cryptocurrency miners are probably moving to the midrange segment due to tight supply of high-end GPUs, which is good news for AMD given its hold over this area. NVIDIA isn't expected to launch a new generation of graphics cards right now because of tight supply conditions that would force it to price its new GPUs at exorbitant levels.

So, AMD has a lot going for it in the GPU space right now and this could be bad news for NVIDIA.

The automotive segment was touted to be a big growth source for NVIDIA with the advent of self-driving technology, but this segment of its business reported muted growth last quarter as revenue grew just 3% year over year. What's even more surprising is that the chipmaker's automotive business has stagnated despite the presence of a strong ecosystem of 225 partners.

However, investors seem willing to give NVIDIA some leeway, as most of the stakeholders in self-driving cars are just getting started. NVIDIA has admitted that its existing model of selling chips to power vehicle infotainment systems has become commoditized. As a result, it is moving to a new strategy of selling complete autonomous vehicle systems.

But NVIDIA isn't the only one to have thought of such a strategy. Mobileye, an Intel company, has been working with Delphi for the past two years to bring a self-driving car system to the market as early as 2019. The three companies are busy developing a fully autonomous system that will rely on sensors, cameras, radar, and Mobileye's software to help vehicles navigate in complex situations.

NVIDIA is looking at a similar timeline, hoping to deploy fully self-driving trucks in partnership with DHL and ZF by next year. But the graphics specialist won't find it easy in this market thanks to the stiff competition. Intel has been making bold advances, and claimed in January this year that 2 million cars from Nissan, Volkswagen, and BMW will start using Mobileye technology from this year.

Chipzilla has also tied up with SAIC Motor and Chinese digital mapping specialist NavInfo to speed up self-driving vehicle development in China. So, NVIDIA's automotive growth is far from secure thanks to Intel's technology advancements and partnerships.

Investors shouldn't turn a blind eye to these threats. NVIDIA's failure to win  the lucrative self-driving car opportunity and concession of market share to AMD could spell trouble in the long run.