HTC (OTC:HTCKF) entered the high-end virtual reality (VR) market with its Vive headset in April 2016, and, roughly two years later, the company is set to ship its next evolution of the hardware. The soon-to-be released Vive Pro will feature an image resolution of 2880x1600 (up from 2160x1200 for the original Vive) and debut at a $799 price point. Pre-orders are now open, and the first batch is set to ship April 5.

The jump in resolution offered by the Vive Pro is evidence of a significant hardware update, but the price suggests that the company is not targeting the consumer-level market. 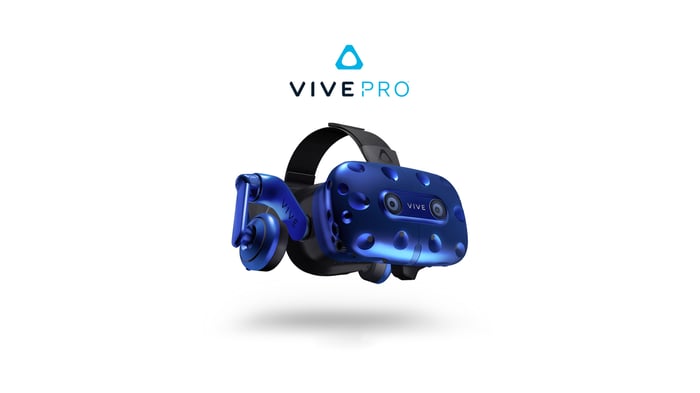 Higher end at a high price

In addition to better image quality and built-in audio speakers, the Vive Pro headset has also been fitted with a new strap that's designed to be more comfortable and allow less external light into the viewing portal -- a feature that HTC says will make the VR experience more immersive. However, the Pro does not include any controllers, a base port sensor, or a wireless adapter.

That means that for those who don't already own Vive peripherals, the cost of the Pro headset plus two controllers and two base stations for movement tracking will come out to roughly $1,330 before shipping. The price for HTC's new headset puts the device outside the range of affordability for most -- other than the most dedicated VR enthusiasts and those seeking VR hardware for enterprise purposes -- and there are already similar offerings with less-daunting price tags.

The Vive Pro's feature set is pretty similar to that of the Samsung (NASDAQOTH: SSNLF) Odyssey HMD -- with both devices featuring 2880x1600  resolutions and built-in audio. However, Samsung's high-end headset comes with two controllers and retails at $499.

The Vive Pro has built-in integration with the SteamVR platform (while the Odyssey will first need to connect through Windows 10) and may be more comfortable and have other features that help to explain some of the price separation between it and Samsung's high-end headset. But the devices look pretty similar when comparing their core features, so the cost differential is notable. Surveying Vive and VR-focused online discussion boards, even VR enthusiasts seem unimpressed by what the Pro is offering for the price.

The standard Vive bundle gets a price cut

One bit of good news, as far as broader VR adoption and HTC's position in the space are concerned, is that the price for the basic Vive model is coming down. The company paired the announcement of a launch date for the Pro with news that it had lowered the price for the original Vive bundle, which includes a sensor bar and two controllers, from $599 to $499. For most potential customers interested in a high-end VR headset, the basic Vive should probably fit their needs, and a price cut puts the hardware in position to continue to be competitive against Facebook's Oculus Rift and other VR headsets.

The VR market is still at a very early stage of development, and consumer-level headsets got off to an underwhelming start commercially. However, as prices have dropped and more software has become available, sales tracking has indicated increased interest, and there does seem to be a long-term opportunity for the companies behind leading hardware platforms.

The Vive Pro probably isn't meant to be a big seller

The Pro isn't a mass market device. Upon release, it will reset the bar in the VR headset market and give Vive owners looking for a more advanced model something to scratch the itch. But the price point will prove prohibitive when it comes to attracting the uninitiated in significant numbers.

When HTC unveiled the Vive Pro at the Consumer Electronics Show in January, the company made clear that the device was at least partly intended for the enterprise market. With that focus in mind and the VR industry still in a relatively nascent state, the Pro likely isn't meant to be a huge sales driver for HTC. Rather, the device might serve as an upgraded tool for developers working on the next batch of applications and content that will push VR closer to mainstream adoption.