The use cases for virtual reality are almost unlimited as long as there's someone willing and able to create the content. Of course, games and movies get the most attention in virtual reality (VR), but there are increasingly significant training applications also using the technology.

Training may not have been the No. 1 application Facebook's (NASDAQ:FB) Oculus or HTC's (OTC:HTCKF) Vive groups were thinking about when they designed their headsets, but it's where the market is going. And it's an area everyone in VR should take more seriously. 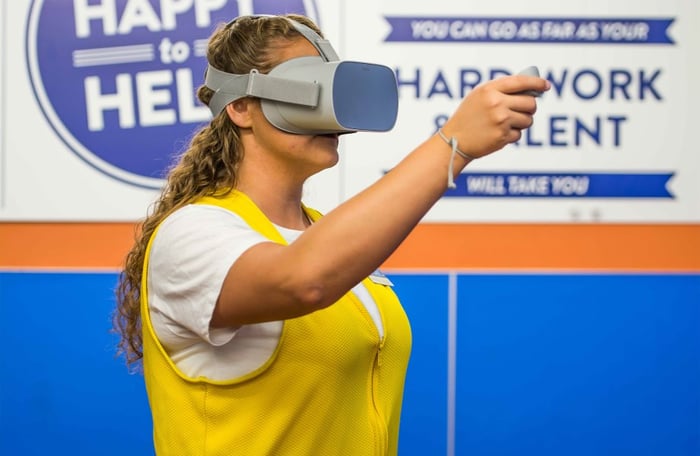 In 2018 Walmart (NYSE:WMT) began using the Oculus Go virtual reality headset to train associates ahead of the high-stress holiday season. Associates got training in "new technology, soft skills like empathy and customer service, and compliance."

New technologies being incorporated by Walmart like the Pickup Tower even got up and running with assistance from VR training before the devices hit the store floor. The training can reduce errors from new technology and reduce rollout time for new products and services, which both have a positive return on investment.

VR doesn't always have to be about retail, though. Body camera maker Axon (NASDAQ:AXON) recently announced that the Chicago Police Department is using an empathy training scenario in VR as part of its crisis intervention training curriculum. The training puts officers through scenarios that involve people suffering from "mental health issues, crises or psychotic episodes"  and aims to give them a new perspective on situations they might find themselves in.

Being able to put officers through an immersive, real-life scenario can be more impactful than other teaching methods and is now scalable with stand-alone headsets like the Oculus Go and Quest.

Sports training taken to the next level

One area where VR training is being adopted quite rapidly is sports. Using VR as a training tool can give athletes the ability to practice something an unlimited number of times without incurring as much of a physical toll. During the 2017 season, NFL quarterback Case Keenum credited 2,500 VR practice reps while working as a backup for helping him lead the Vikings to an 11-3 record when he took over as a starter.

There are also VR simulators for goaltending and stick handling in ice hockey, pitch simulators in baseball, and even snow skiing simulations. Virtual reality training can add value in almost any sport, advocates say, and reduces a lot of the risk of physical injury while training.

With millions of people worldwide going through various training programs in VR and tens of thousands of headsets being sold to companies doing training, it's conceivable that more people have used VR for training purposes than for playing games. This is important because the platforms companies are building lend themselves to different use cases.

Oculus's Go and Quest headsets have been popular for training purposes, but they're primarily built for consumers. They're lower cost and less powerful than rival devices made by HTC, and the Oculus distribution platform is built to sell games and other consumer content.

HTC has built a more open platform that's designed with enterprises in mind. It's easier to run custom content on the company's devices, and headsets are higher quality than Oculus' (and more expensive). The downside is that Oculus is leading in stand-alone headsets, which are attractive for training that may include dozens of people in VR at the same time.

As new devices and platform upgrades are launched, look for corporate training to be a segment more headset makers try to capture. It's an extremely valuable part of the VR ecosystem and may gain traction well ahead of consumer VR use cases.