The Marine Corps has posted its wish list for a long-discussed megadrone, challenging contractors to come up with an aircraft able to pack nearly as much of a punch as the most sophisticated modern fighter jets and take off vertically from the deck of a warship.

The Pentagon in a request for information published March 9 outlined its desired specifications for the Marine Air Ground Task Force Unmanned Aircraft System-Expeditionary, better known as the MUX. It's a program that has been discussed publicly since at least 2016 but has been slow to get off the drawing table amid questions about whether or not the desired specifications are even feasible. 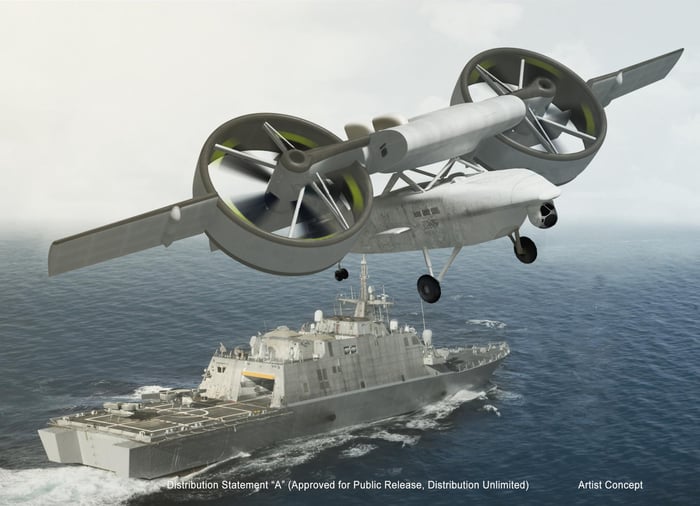 Even with the request for information, the MUX is still likely decades away from being fully operational. But that hasn't stopped a range of contractors from expressing interest. Textron (NYSE:TXT) unit Bell Helicopter, Lockheed Martin (NYSE:LMT), and Northrop Grumman (NYSE:NOC) are all expected to be involved in the eventual competition, and others including Boeing are expected to kick the tires as well.

The MUX as envisioned by the Pentagon would rival the F-35 and other fighters in many combat situations, able to fly at least 700 nautical miles while fully loaded with a payload of 9,500 pounds and flying at 400 mph. The Marines want the MUX to carry a range of weapons including Hellfire air-to-ground missiles, AIM-9X Sidewinder air-to-air missiles, and laser-guided rockets, and to have the ability to host and launch mini-drones in-flight.

The Marines want the MUX operating from a land-based takeoff system by 2025, toward a goal of having the craft fully operational by 2034. The MUX should eventually be able to launch vertically from warships, receive mid-air refueling, and fly both as companions to manned aircraft in a combat situation or be used for electronic warfare, reconnaissance, or for command-and-control support.

A long (and potentially lucrative) development

MUX deployment is so far off mainly because it would require technologies that are either not yet available, or tyat would need significant refinement. As Lockheed Martin has discovered with the F-35, the futuristic fighter expected to fly through the next half-century, there are risks to such projects in the form of cost overruns and unexpected issues. But there are also likely billions of dollars available for development.

The winning bidder also gains an advantage in future competitions from the R&D that would go into the MUX effort, and it would help ensure them a seat at the table as the Pentagon plans other futuristic weapons systems using some of the technologies employed on the MUX.

Bell Helicopter is expected to submit a version of its V-247 Vigilant drone concept, a tiltrotor aircraft similar to the V-22 Osprey piloted aircraft that was first introduced in 2016. Lockheed Martin, meanwhile, is working with privately held Piasecki Aircraft on a drone called ARES, and Northrop Grumman has a TERN drone concept it could submit.

The MUX is not going to be the basis for an investment thesis any time soon. The engineers working on this project in the quarters to come are laying the foundation for business their employers hope to win over the next decade or more.

For today's investors, the importance of projects like the MUX is knowing that beyond the current budget cycle and next quarter's deliveries, there are new programs and new sources of revenue on the horizon. For those willing to buy good companies and hold them for extended periods of time, programs like the MUX are validation that future growth will be there.