As the calendar turns to a new month, five investors have turned their sights on these five stocks to buy.

After the S&P 500's near-record streak for consecutive positive months came to an end in February, investors have now seen two consecutive months of stock declines. And while that doesn't really tell us what will happen with stocks next month or the month after, it does confirm one thing: Stocks can be unpredictable in the short term. Case in point: The S&P 500 is down 8% from its all-time high as of this writing, while the Dow Jones Industrial Average is down more than 9% from its peak.

On the other hand, stocks continue to be the best long-term creator of wealth for the average Joe and Jane, and the market's recent volatility -- which is far more normal than last year's steady march higher -- has created some wonderful opportunities to invest. Five companies that belong at the top of your shopping list are Devon Energy Corp. (DVN 1.79%), Bank of America Corp. (BAC -1.48%), Ulta Beauty Inc. (ULTA 1.66%), Pattern Energy Group Inc. (PEGI), and Alphabet Inc. (GOOGL -0.68%) (GOOG -0.73%). 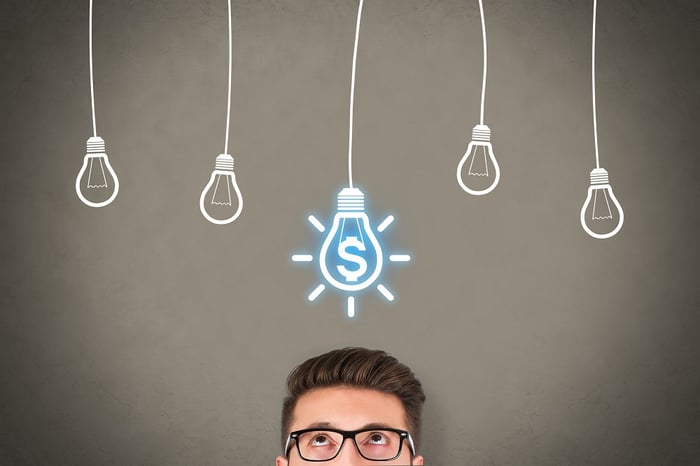 Five timely stock ideas for April. Which one fits in your portfolio? Image source: Getty Images.

Keep reading to learn why these companies caught the attention of five Motley Fool investors, and what makes them ideal stocks for you to buy in April.

The catalysts for a turnaround

Matt DiLallo (Devon Energy): Oil giant Devon Energy has been a terrible stock in the recent past, slumping 20% over the last year even though oil prices have rebounded nearly 40%. One of the issues is that the company's fourth-quarter report disappointed investors because if some temporary problems outside its control. This sell-off, however, makes Devon looks like an incredible bargain this month given the catalysts up ahead. 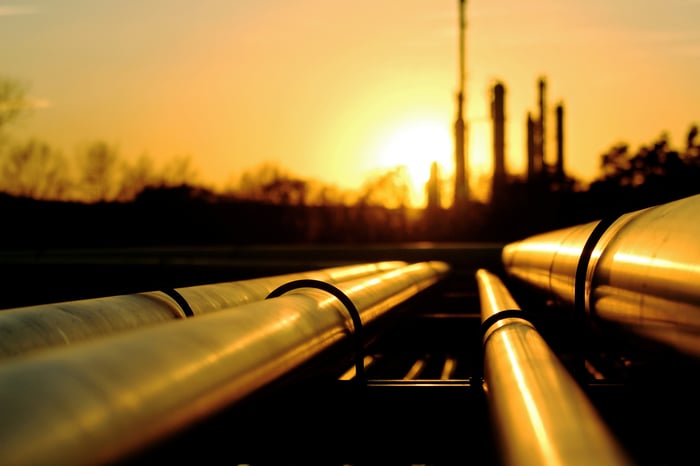 For starters, the company recently announced plans to start returning more cash to investors, including authorizing a $1 billion share repurchase program and a 33% dividend increase. That stock buyback stands out because it represents about 6% of the company's outstanding shares at the current price and could give the stock a boost in the coming year, just as similar programs have fueled big-time gains for several rivals. Meanwhile, Devon could buyback even more of its beaten-down stock in the future given its plan to trim down to just three core positions. These asset sales could pull in as much as $5 billion in cash and would really move the needle on the stock price if used to repurchase shares.

While it could take some time for those catalysts to pay off, a near-term one worth noting is that Devon Energy will likely report first quarter results in early May. While last quarter's report disappointed, this one could surprise to the upside because the company quickly solved the production problems that plagued it at the end of last year, turning that headwind into a tailwind for the first quarter. That report could trigger a rebound, which along with the buybacks, has the potential to fuel strong gains in Devon's stock price from here as long as oil prices hold up.

Jordan Wathen (Bank of America): The nation's second largest bank by assets is an attractive buy given a megabank-friendly regulatory environment and the potential for rising interest rates, which would be a boon for asset-sensitive banks like Bank of America.

This company has come a long way over the past decade. Ten years ago, Bank of America was acquiring Countrywide and Merrill Lynch at obscenely high prices, and driving loan growth through lax lending in credit cards. These decisions panned out to be disastrous for its shareholders, resulting in tens of billions of dollars in legal settlements and credit losses for years after the financial crisis. 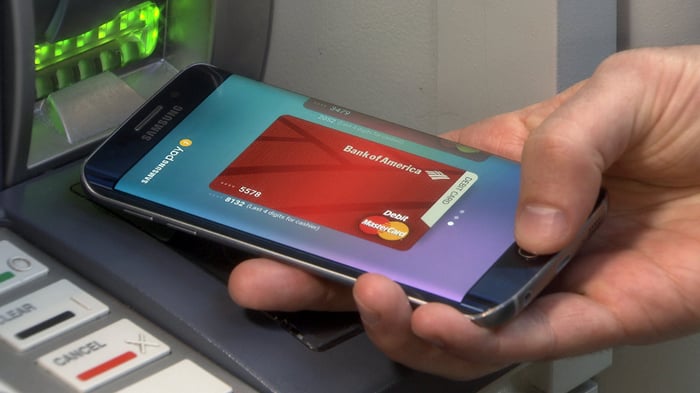 Today, Bank of America finds itself leaner, more efficient, and, in my view, substantially less risky from a credit perspective. More than 80% of its U.S. credit card and other consumer loans are to borrowers with a FICO score of 680 or better. And shareholders can rest assured it can't go on another acquisition spree -- Bank of America is so large it isn't legally allowed to buy another bank. Its scale is an advantage in a world with increased regulatory scrutiny, since megabanks can spread regulatory costs across their trillion-dollar balance sheets.

Bank of America spent the past 10 years eliminating unnecessary operating expenses, shuttering or selling non-core branches, and improving its underwriting. Now, with interest rates rising, investors are set to see that progress finally pay off in a big way, as Bank of America has one of the most attractive deposit franchises of any of the Big Four banks. Shares trade at roughly 1.7 times tangible book value, an attractive price for a bank with a real competitive advantage derived from its scale and ability to gather low-cost deposits in a rising-rate environment.

Brian Feroldi (Ulta Beauty): The narrative on Wall Street right now is that Amazon.com is eventually going to crush every brick-and-mortar retailer out there. While I agree with that sentiment to some degree, I'm a firm believer that retailers that provide an experience that cannot be replicated elsewhere will continue to thrive. That's why I find Ulta Beauty to be a compelling growth stock to buy today.

Ulta is a leading provider of beauty products in the United States. Each of the company's 1,058 stores sell thousands of beauty products at a variety of price points and also offer in-store salon services. In essence, Ulta has created a one-stop shopping destination for beauty enthusiasts.

Ulta employs several unique tactics to ensure that its customers stay loyal, including:

When combined, these factors have allowed Ulta to grow same-store sales at a rapid pace for years, including an 11% jump in 2017. That's a number that most retailers would kill for. What's more, management is guiding for a 6% to 8% comp jump in 2018 and 20% growth in earning per share. 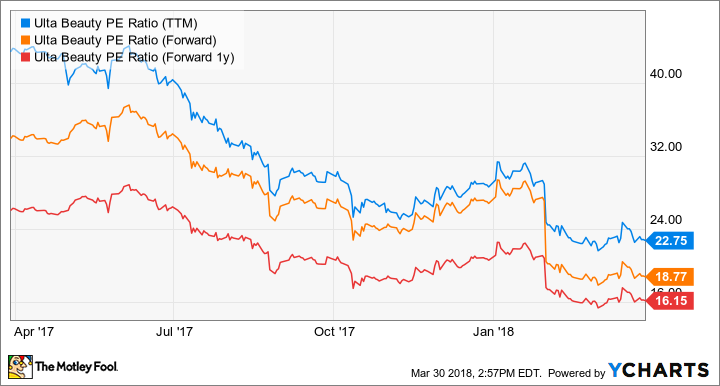 Even though this business is clearly firing on all cylinders and sports a debt-free balance sheet, shares can be purchased today for about 16 times next year's earnings estimates. I think that's simply too cheap for a high-quality business that has plenty of room left for future growth.

Getting greedy on the future of energy

Jason Hall (Pattern Energy): This small independent renewable energy company's stock has taken a drubbing over the past six months, down 30% from the recent peak. This pummeling has pushed the company's dividend yield up to a staggering 9.7% at recent prices, making Pattern Energy an incredible potential investment just on the basis of its payout alone. But it's a top stock to buy, in my book, because of its incredible long-term growth prospects.

I know what you're thinking: With the stock down 30%, there have to be problems, right? Well, not exactly; the market has sold out of the company on future concerns, not actual material weakness. Over the past several months, rising interest rates, tariffs on solar panels, and potential changes to renewable energy tax policies has rattled investors, as all of these things would affect Pattern Energy.

But I think the market's reaction has gone too far, and that's created an opportunity to buy Pattern at a very attractive price.

I think investors can count on Pattern Energy's leadership to navigate the changing environment and lead the company to many years of growth. The bottom line is that renewables are taking market share from fossil fuels in power generation. Over the past decade, renewables have accounted for the  majority of new global power capacity brought online. With energy storage falling in price and improving in capability, renewables growth is likely to accelerate. That's great for Pattern Energy.

There's some risk that Pattern's management doesn't execute as well as I expect. But on balance, the massive potential for years of growth more than offsets the potential risks Pattern faces.

Danny Vena (Alphabet): The data breach at social-media titan Facebook, Inc. (NASDAQ: FB) has routed its shares, taking many of its tech brethren down with it. Google parent Alphabet hasn't been immune, falling more than 15% from its recent highs. The two are part of a digital advertising duopoly that dominates online marketing, so it's easy to see why they might fall in concert. But if advertisers begin to distance themselves from Facebook, Google has the most to gain, as advertising generated the vast majority of its $32 billion in revenue last year.

I think there's still plenty to like about the company that has become synonymous with search. Google controls 74% of the desktop search market worldwide, and a whopping 92% for mobile devices. The public isn't likely to change its search habits as a result of the Facebook data breach. 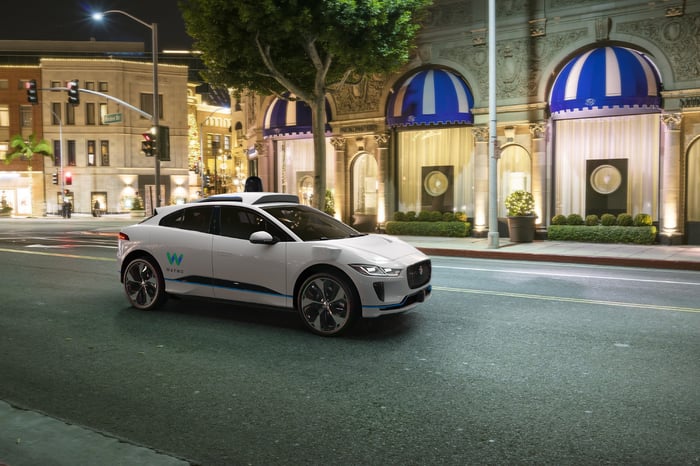 Alphabet's self-driving Waymo division announced that it will launch its commercial ride-hailing service in the U.S. later this year, and the company is expanding its fleet, with the addition of up to 20,000 Jaguar electric I-Pace SUVs, in partnership with automaker Tata Motors. Waymo has gone from a "moonshot" to a segment that could soon be worth billions.

Google is also one of the pioneers in artificial intelligence, using the technology to improve its search relevance, discover new planets, and detect cancer in medical images. In light of all the technological advances and potential future growth, the selling is clearly overdone, and I think Alphabet is the stock to buy in April.