Please ensure Javascript is enabled for purposes of website accessibility
Log In Help Join The Motley Fool
Free Article Join Over 1 Million Premium Members And Get More In-Depth Stock Guidance and Research
By Scott Levine – Apr 5, 2018 at 7:32AM

It's not just the potential for gold mining that makes this property a glittering proposition.

For several decades, the Pebble deposit, located in southwestern Alaska, has inspired miners' dreams of striking it rich. Cominco, now Teck Resources, discovered the deposit in 1989. However, it now belongs to Northern Dynasty Minerals (NAK -0.29%), which characterizes the Pebble deposit on its website as "one of the greatest stores of mineral wealth ever discovered, and the world's largest undeveloped copper and gold resource." With a description like this, it's no wonder that Northern Dynasty Minerals remains on investors' radars.

Since the Pebble project is still in the permitting phase, it represents an intriguing opportunity for growth investors who have long time horizons and are more tolerant of risk. After all, the U.S. Army Corps of Engineers anticipates releasing the final environmental impact statement in April 2020, and if the company receives the approval to proceed with development of the mine, its construction is estimated to take an additional four years. Let's dig in deeper to gain a better understanding of the company's resource and how it can lend more luster to investors' portfolios. 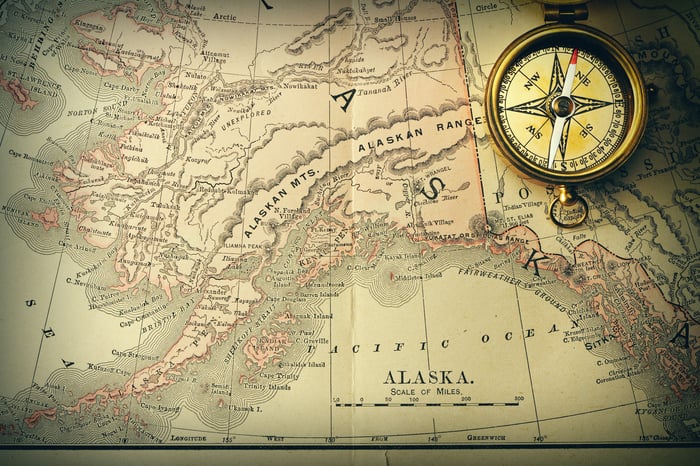 Shovels won't be digging minerals out of the ground anytime soon, but when they do, Northern Dynasty expects them to be busy. According to the company's most recent permit application, the Pebble mine will operate for a period of 20 years, during which time average annual gold production will equal 321,000 ounces. Average annual copper and molybdenum production, moreover, is expected to equal 287 million pounds and 13 million pounds, respectively.

Impressive as these figures may sound, they alone are insufficient to gauge how lucrative the mine could be, so let's turn to another company, Freeport-McMoRan, which deals in the mining of gold, copper, and molybdenum. According to its 2017 10-K, over the past five years, Freeport-McMoRan has reported average realized prices per pound of $2.81 for copper and $10.19 for molybdenum and $1,236 per ounce for gold. Considering Northern Dynasty's production forecasts in the context of the average mineral prices, we can approximate what the company will generate in annual revenue.

Mining in Alaska may be most synonymous with gold, but it's copper that will presumably put the most green in Northern Dynasty's pockets. Based on the above estimates, it's likely that Northern Dynasty could generate more than $1.3 billion in annual sales, with copper comprising about 60%. 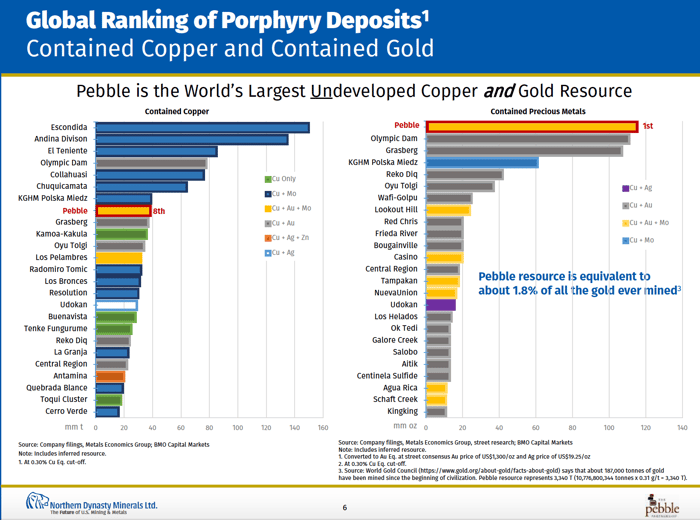 There's no mistaking the considerable value of the Pebble deposit, and there's reason to believe that there's more waiting to be discovered. According to management, there are numerous satellite deposits on the Pebble property that warrant follow-up exploration, including several porphyry copper deposits in addition to gold and polymetallic vein prospects.

But is this fool's gold?

As alluring as the project may appear, it's crucial that the project's glittering potential doesn't blind investors. After all, it's uncertain whether Northern Dynasty actually succeeds in bringing the Pebble project to fruition, presenting investors with a mountain of risk. For one, the issue of whether Northern Dynasty receives the necessary permits is far from a guarantee. Although the election of President Trump, who strongly supports domestic mineral production, inspired confidence that Northern Dynasty would advance through the permitting phase, the company received a blow last January when EPA administrator, Scott Pruitt, stated, "It is my judgment at this time that any mining projects in the region likely pose a risk to the abundant natural resources that exist there."

Of course, if the company receives the go-ahead, funding the project's construction represents another major hurdle. Shareholders are already facing significant dilution following the company's entrance into a framework agreement with First Quantum Minerals Ltd. in late 2017. After providing $150 million to Northern Dynasty over four years in the form of option payments, First Quantum will have the right to acquire a 50% interest in the Pebble Project for $1.35 billion. And since Northern Dynasty doesn't generate revenue, the prospect of further equity raises -- and subsequent shareholder dilution -- seems likely.

The Pebble deposit's extensive gold resources make Northern Dynasty a compelling opportunity, but the asset's extensive copper mineralization is equally -- if not more -- noteworthy. And with copper demand expected to remain strong in the foreseeable future thanks to the prominent role the element plays in the construction of electric vehicles, the Pebble project could very well make the company one of the more compelling copper investment opportunities in the market.

For Northern Dynasty, however, the path forward is far from certain and even if all goes well, it will be years before the company starts to dig minerals out of the ground. Most importantly, it's essential to remember that even if the company proceeds through the permitting phase, and secures the necessary funding, and constructs the mine, and achieves mineral production, there's no assurance that the project will maintain a cost profile which makes it a lucrative endeavor. For these reasons, all but the most risk-tolerant of investors should watch this narrative play out from the sidelines.