These companies are dominating their markets and paying their shareholders generously.

Investors looking for stocks with lots of long-term potential would, of course, love to find a few companies with virtual monopolies to add to their portfolios. After all, a company with any sort of sustainable competitive advantage over another is great for investors.

But finding companies with these dominant positions can be difficult, and ones that pay a high yield are even more elusive. To help with your search, we asked these three Motley Fool investors for high-yield stock suggestions that have virtual monopolies. Their choices: Anheuser-Busch Inbev (BUD 1.26%), Philip Morris International (PM 0.38%), and Enbridge (ENB 2.59%). Read on to find out why. 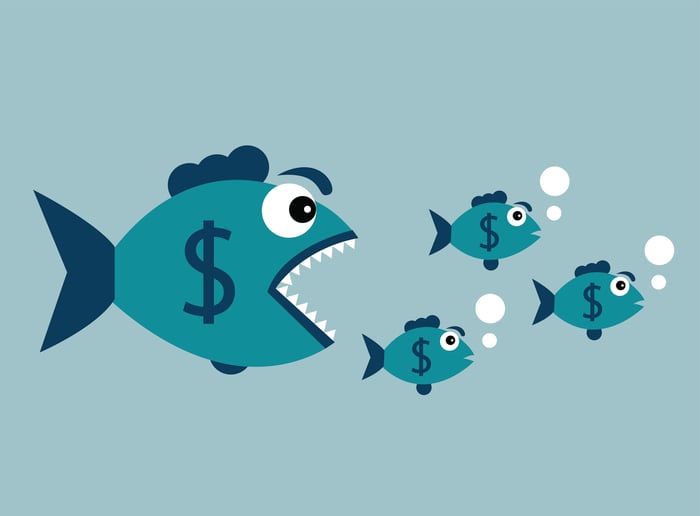 The most popular adult beverage, monopolized

Nicholas Rossolillo (A-B InBev): When it comes to beer -- the world's alcohol of choice -- there are a lot of options. There's a good chance, though, that one of your favorites is owned by Budweiser parent company A-B InBev. About one in six beers sold in America is a Bud Light, and the company has an estimated 26% of global market share. A distant second is Heineken (NASDAQOTH: HEINY) at 10%.

The company pulls off that vast market lead with its big stable of brands. Besides Budweiser, A-B InBev also owns and distributes Stella Artois, Corona, 10 regional craft beers, and more. The company wields so much control that it had to sell its interest in MillerCoors back to Molson Coors (NYSE: TAP) before U.S. regulators would approve A-B InBev's purchase of global brewer SABMiller a couple of years ago.

Even though the volume of its beverages sold in 2017 increased just 0.2%, revenue increased 5.1%. InBev pulled this off by increasing prices on its top-tier brands, a process it calls "premiumization." Read "market control" here, as selling over a quarter of all beer consumed gives InBev the power to control pricing to an extent. After the acquisition of SABMiller, profits are also back on the rise, increasing 43% over 2016.

All of that adds up to a 3.7% dividend yield. Management said to expect payout increases to take a breather in the short term as it offloads debt and expenses following the SABMiller deal. But over time, the company's goal is to keep those dividends growing.

Philip Morris is the global tobacco company spun off from Altria several years ago, charged with marketing Marlboro cigarettes internationally. As such, the brand has the No. 1 share in dozens of markets. And where it isn't the leader, it is often No. 2.

Even in next-generation tobacco products, such as its heat-not-burn iQOS electronic cigarette, it is quickly becoming the leading product on the market. Notably, in Japan, Philip Morris has now begun shipping more iQOS units than combustible cigarettes, and it has the leading share of the entire cigarette market combined.

The lure of cigarette companies has always been their dividends, and Philip Morris International doesn't disappoint. Its dividend of $4.28 per share currently yields 4.2%. And coupled with the promise that next-gen reduced-risk products will actually be a growth market (compared to the dwindling size of traditional cigarettes), Philip Morris International remains an income investor's good friend.

An oil pipeline company connects you to a hefty dividend

Chris Neiger (Enbridge): Enbridge is a Canada-based energy infrastructure company that owns one of the biggest oil pipeline systems in North America. The company's virtual monopoly comes from the fact that its business accounts for nearly 28% of America's oil imports and moves about 28% of all the crude oil produced in North America through its pipelines. Other energy companies can't easily replicate that type of energy infrastructure influence.

The company has benefited from ongoing energy projects that it's brought online recently, which helped boost the company's revenue by 38.7% in the fourth quarter 2017, to $12.9 billion in Canadian dollars ($10.12 billion). Earnings fell significantly, but investors shouldn't worry. Changes to the U.S. tax codes resulted in Enbridge writing down about CA$2 billion in deferred tax liabilities. The company also made changes to how it reports its quarterly earnings, which are now reported on an EBITDA basis.

But investors should focus on the company's ongoing ability to start new energy projects. Enbridge brought CA$12 billion in projects up and running in 2017, and an additional CA$22 billion are coming online through 2020. Investing in these projects should help the company increase its sales and earnings for years to come.

Dividend investors will appreciate the company's 6.6% yield, and should be comforted by the fact that Enbridge has raised its dividend for the past 23 years. The stock looks even more attractive when you factor in that Enbridge plans to make additional 10% dividend increases each year for the next two years. Investors looking for a near-monopoly in the energy infrastructure market and a company with a very high yield (and long history of raising it) might just get everything on their wishlist with Enbridge.