Please ensure Javascript is enabled for purposes of website accessibility
Log In Help Join The Motley Fool
Free Article Join Over 1 Million Premium Members And Get More In-Depth Stock Guidance and Research
By Maxx Chatsko - Apr 10, 2018 at 9:07AM

The volumes of liquefied natural gas, or LNG, leaving American shores are booming right now. The United states will leap from an almost nonexistent player a few years ago to the world's third-largest exporter in a span of roughly five years. To be fair, global LNG trade has erupted in the last two decades, but cheap shale gas made the U.S.'s entry possible in a big way.

While numerous LNG export terminals dotting the Gulf Coast are in various stages of development, the first major facility and current largest producer is the Sabine Pass facility owned by Cheniere Energy Partners LP (CQP -1.23%). The partnership is largely controlled and majority-owned by Cheniere Energy. That means the current 6.9% distribution yield is essentially funding the construction of the parent's next export facility in Corpus Christi, although any investor seeking income can get in on the action.

The yield is impressive, and LNG is going to be one of the most important energy sources for decades to come, but does that alone make Cheniere Energy Partners LP a buy? 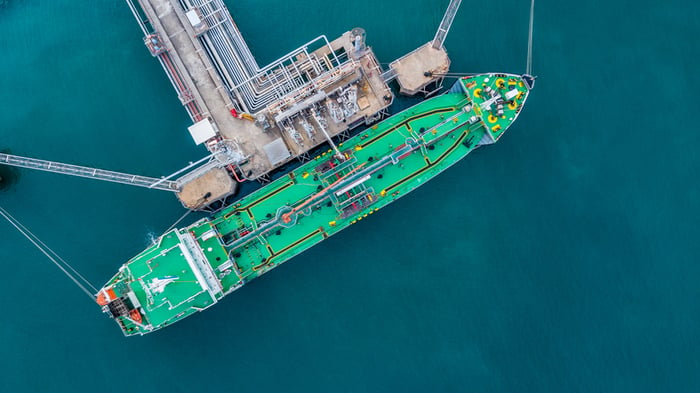 All revenue and income for Cheniere Energy Partners is generated by LNG exports from the Sabine Pass liquefaction facility, which has significantly ramped up operations in the last two years. The finer details of how export terminals work make it easy to follow the much-improved financial numbers.

A liquefaction facility comprises modular units called trains, which combined give an export terminal its massive capacity. Sabine Pass booted up its first four trains in May 2016, September 2016, March 2017, and October 2017, respectively. Of course, there's always a lag time of at least a few months between when a unit starts operating and when it ramps up to full production capacity and financial impact. There's also a fifth train expected to be completed in the first half of 2019, while a sixth train is ready to roll from a regulatory perspective but construction has yet to begin.

In other words, while 2017 was pretty good, things will get even better in the future when the first four trains get up to full tilt and when Train 5 and Train 6 come online.

In addition to bringing more capacity on line, the year-over-year improvement was also enabled by a business model that relies on selling substantially all output from Sabine Pass in long-term agreements at fixed prices. That means Cheniere Energy Partners is essentially guaranteed to be a cash cow for decades, which should allow for opportunities to increase the distribution over time while simultaneously paying down a massive debt load.

While the debt balances shouldn't be overlooked, the nuances of the partnership's business make it difficult to use more traditional valuation metrics when analyzing whether Cheniere Energy Partners is a buy. For example, the stock sports an EV-to-EBITDA ratio of over 20, but that says more about how expensive Sabine Pass has been to build than the company's profitability, which will rise considerably in the next several years.

It's also worth noting that simply maintaining the level of operating cash flow achieved last year, about $977 million, would be enough to fund the current distribution to unitholders for 2018, or about $700 million. Considering four trains will be operating for the full year for the first time this year, there will be more than enough cash to cover the distribution going forward. 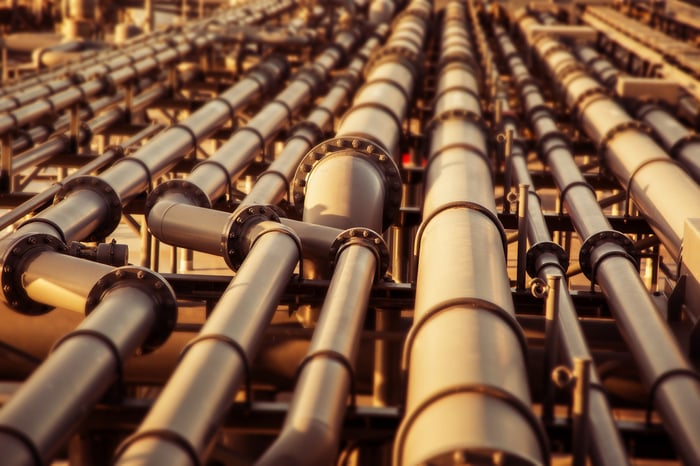 That gap will continue to expand over time, allowing the partnership to cover all of its investing and financing cash flow items, not just the distribution. Investing requirements will decrease over time as Train 5 -- 83% complete by the end of February -- nears operational readiness. In fact, that was already the case last year as investing cash flows improved by 45% in 2017 compared to the prior year.

Financing requirements mostly relate to making payments on outstanding debt. Cheniere Energy and Cheniere Energy Partners have some pretty complex arrangements with creditors. But generally speaking, as production increases in the coming years, profits and cash flows will increase, which will make it more comfortable to service debt and refinance, consolidate, and push back maturity dates.

In other words, despite owning a balance sheet that would be pocked with giant red flags and warning signs for almost any other investment, Cheniere Energy Partners should be able to reward investors with gobs of income for years or even decades into the future. 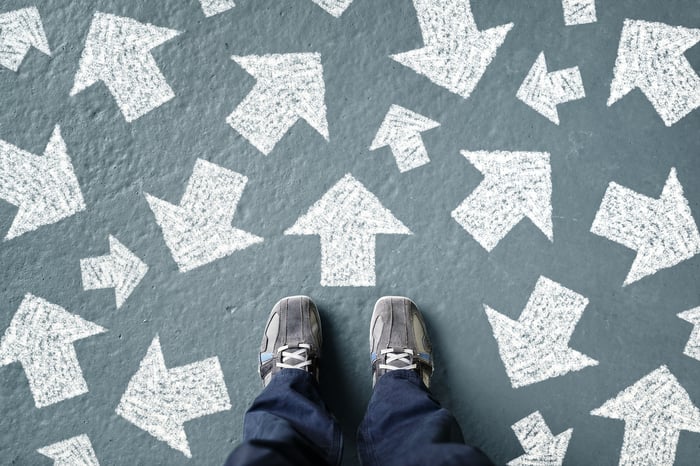 A good source of income. Is that enough?

In today's market, investors would have a difficult time beating the partnership's current 6.9% distribution yield. However, it's worth noting that the total returns (share gains plus reinvested dividends) have grossly underperformed those of the S&P 500 in the last three and five years.

That may seem obvious considering the company was and is not firing on all cylinders. But there may not be much room to grow beyond the current $15 billion market cap. In a strange bit of irony, the consistency of its business model over the long run may limit its growth potential as an investment, and therefore also hurt the company if it doesn't expand beyond Sabine Pass. That means shares of Cheniere Energy Partners may continue to lag the returns of the broader market in the long run, despite the high yield.