United Technologies (NYSE:RTX) recently hosted a meeting for analysts and portfolio managers, and updated investors on its midterm plans. While there weren't any major changes to guidance, management made some subtle changes to its outlook that suggest that some big changes could, and more important, should, take place.

Let's take a look at the three key takeaways from the presentation, and what they mean to investors. 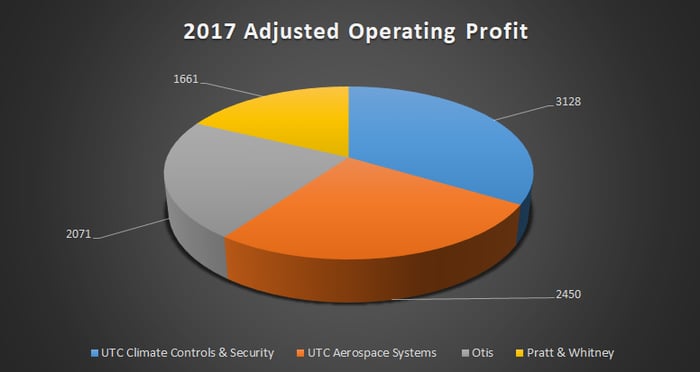 Unsurprisingly, there was no change to any of the formal full-year 2018 guidance given at the end of January. In a nutshell, the company still expects UTC Climate, Controls and Security (CCS) and UTC Aerospace Systems (UTAS) to drive profit growth in 2018.

Meanwhile, Pratt & Whitney faces heavy up-front costs as it ramps up production of its geared turbofan, and Otis continues to face pricing headwinds in China as it seeks to expand market share.

However, there was a subtle change in guidance for the CCS segment and changes in tone regarding Otis and Pratt & Whitney -- and they were all negative. As you can see below, CCS profit growth expectations for 2016 to 2020 were adjusted downward. Meanwhile, Otis president Judy Marks seemed to guide investors toward the low end of the 2020 target for Otis: "I believe we can achieve, at a minimum, the low end of the range that's been committed and that's been projected."

Finally, Pratt & Whitney president Bob Leduc also guided investors toward the low end of 2018 expectations, because of a $50 million cost hit from fixing a recent technical issue on the geared turbofan (GTF) engine -- an engine that competes directly with CFM International's LEAP engine on the Airbus A320Neo. (CFM International is a joint venture between General Electric and Safran.)

Frankly, it's hardly surprising that CCS profit growth expectations decreased. After a difficult 2016, when the segment's organic growth was negative 1%, the aim was to increase the growth rate again. The good news is that CCS achieved its aim, with 4% organic revenue growth in 2017. But margin came under pressure, with management outlining a plethora of reasons for it -- product sales mix, geographic sales mix, new product sales, rising costs, and more.

Moreover, there's little doubt that rivals such as Lennox International and Ingersoll-Rand have been taking market share. Moreover, Ingersoll-Rand's CEO Mike Lamach was notably more positive on the pricing environment in China than the moderately positive outlook given by CCS.

United Technologies' other construction segment, Otis, also has challenges ahead. Marks acknowledged that Otis needs "higher growth and higher yield in 2018 to 2020," and a better pricing environment in China, in order to hit the 2020 guidance. Marks lauded the fact that Otis had positive equipment unit growth in China in 2017, even as the market was flat, but pricing remains an issue.

Pratt & Whitney and UTAS, the company's aerospace operations, look set for a strong year. While the recent hiccup of a technical issue on the GTF means Pratt & Whitney's profit will be at the low end of guidance for the full year, that's not unexpected.

Moreover, at a recent J.P. Morgan conference, the CEO of GE Aviation, David Joyce, said the LEAP engine had a 59% win rate on the A320neo. This means the GTF has around 41% -- not bad considering the technical issues it has suffered. And there are thousands of A320neos on order that don't, as yet, have an engine on order. 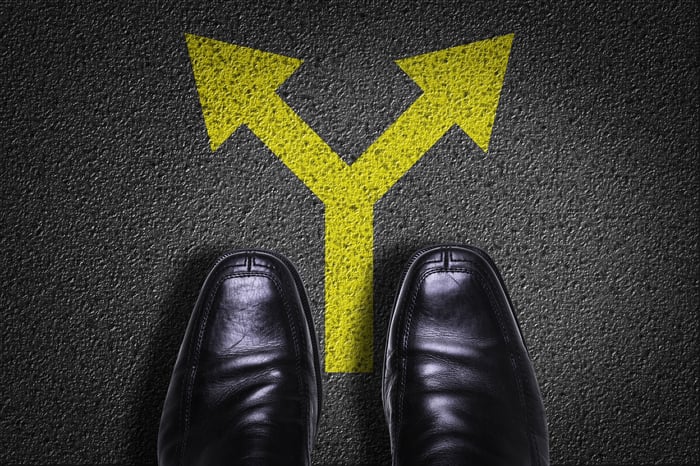 United Technologies Corporation might be heading for a breakup. Image source: Getty Images.

What United Technologies investors should make of this

The slight divergence in performance between the construction businesses (Otis and CCS) and aerospace highlights the potential attractiveness of breaking up the company -- something management has said is under review. At present, investors are faced with a multitude of risks and rewards to contemplate before buying the stock; separating the company might mean its constituent parts (Otis, CCS, and the aerospace business) might command higher valuations than when they're under the United Technologies umbrella.

Given the ongoing challenges in margin at CCS and at Otis in China, it might make sense for United Technologies to go for a breakup. I think the trends outlined in the latest presentation make it more likely this option is taken.