As any grade schooler knows, sometimes somebody's picking on you just because they like you. I initiated a small position in Helios and Matheson Analytics (NASDAQ:HMNY) last week, a company that I've been pretty hard on in the past. It's not because I've been secretly crushing on the majority stakeholder of MoviePass. I still think the MoviePass business model has more holes than the plot of Star Wars: The Last Jedi.

However, with the stock retreating sharply in recent months I think the risk-reward ratio is finally realistic. The risks are sky-high, but the rewards -- if Helios and Matheson can overcome the seemingly unsustainable model -- might also be potent. Let's go over the reasons I bought into this volatile stock. 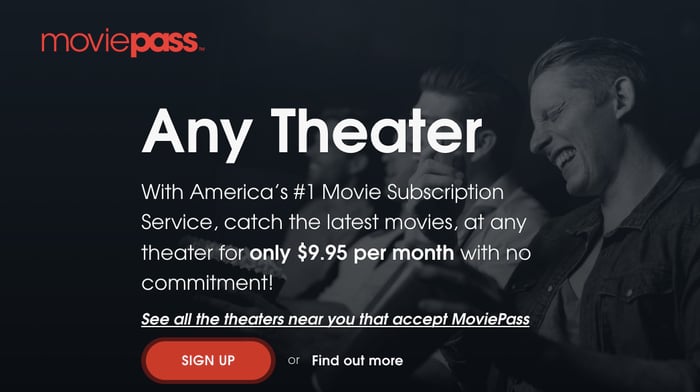 Helios and Matheson turned heads over the summer, acquiring a controlling stake in the fledgling MoviePass service that lets members watch movies at the local multiplex -- no more than one per day -- for a single monthly price. More importantly, the transaction accompanied the announcement that the service would be slashing its monthly subscription rate from as high as $30 to just $9.95.

The platform took off. MoviePass had just 20,000 accounts at the time of the deal, and back in February it was up to 2 million members. The stock also initially spiked -- a more-than-tenfold gain by the time it peaked at $38.86 in mid-October -- only to give it all back.

Helios and Matheson closed at $2.79 the day before it announced the MoviePass deal. The stock closed yesterday at $2.86.

The company is worth more than it was the last time that we were at these levels. Helios and Matheson completed a $105 million secondary offering in February. It priced units at $5.50, including warrants exercisable at $6.50. I'm not a fan of dilution, but the stock would have to double from current levels for those investors to be made whole. I'm fine with that.

Don't underestimate the power of a growing audience. MoviePass CEO Mitch Lowe was at an entertainment finance forum last month, putting out some pretty bold near-term predictions. He sees MoviePass going from 2 million members accounting for 6% of the domestic ticket sales to 5 million members gobbling up 20% of all movie tickets by the end of this year.

The inner bear in you is going to snicker. You're going to pull up the more than $11 billion in box office receipts generated at stateside theaters last year, and jot down that 20% of that would be more than $2.2 billion. Then you're going to multiply 5 million MoviePass members by $9.95 a month -- knowing that many pay even less than that -- and arrive at less than $600 million in subscription revenue. That's a lot of money for a company to lose, and the reason why Wall Street is souring on the business model and the stock.

There's another side to that story. Smaller chains are already playing nice with MoviePass, giving them cheaper tickets and/or a cut of the high-margin concessions. When the country's largest multiplex operator failed to play along, MoviePass responded by booting its 10 business multiplexes from the system.

The bigger it gets, the harder it will be to ignore. We've seen pricing revolutions happen when a disruptor upends a model, and that's just what we're seeing here. MoviePass is already acting like a big fish. It's sponsoring film festivals. It's acquiring distribution rights. It's negotiating and renegotiating deals with exhibitors. MoviePass has also talked about cashing in on the data it's collecting, something that may not be worth enough to subsidize the model (and is a taboo subject these days), but it's one more arrow in its monetization quiver.

Three days after I became an investor, Helios and Matheson announced the acquisition of Moviefone. It may be years since you last thought of the original service that provided audio movie times by phone, but it remains a vibrant entertainment platform, with 6 million monthly unique visitors. As MoviePass grows, it won't be a surprise to find it gobbling up other properties where it can attract and retain potential new subscribers. Moviefone came cheap at just $28 million, or a little more than a quarter of what Helios and Matheson raised in its secondary offering two months ago.

There's also the possibility that MoviePass itself gets taken out. Losing money is never a good look, but when you're growing, it's going to attract some suitors. If MoviePass is really accounting for a fifth of all movie ticket sales a year from now, would you be surprised if a media giant, multiplex operator, or online streaming service makes a play here?

Even if MoviePass remains a swinging single, what happens the day it has millions of more users hooked on the service and it boosts its price to $11.95 or $14.95 a month? This is clearly a speculative stock. However, the upside is there if the crowds, revenue streams, and deals keep coming.