Please ensure Javascript is enabled for purposes of website accessibility
Log In Help Join The Motley Fool
Free Article Join Over 1 Million Premium Members And Get More In-Depth Stock Guidance and Research
By Anders Bylund – Updated Apr 13, 2018 at 9:40AM

One hand-picked buyout in an industry craving some sunlight triggered some roller-coaster action among the acquisition target's peers.

Shares of Oclaro (OCLR) gained 33.3% in March of 2018, according to data from S&P Global Market Intelligence, riding a generous buyout premium as longtime rival Lumentum (LITE -1.22%) launched a takeover bid. On the flip side, many other companies in the fiber-optic networking market saw their share prices shrink last month -- largely because of a lack of Oclaro-style buyout attention for those companies. 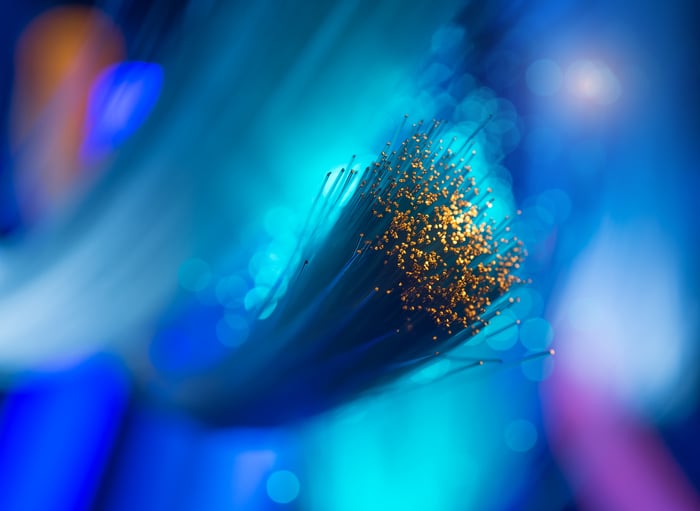 Notably, Applied Optoelectronics (AAOI -5.32%) was held up as a likely takeover target before the ink had dried on the Oclaro/Lumentum deal, but the stock started to fall a couple of weeks later as no such bids materialized. Applied Optoelectronics shares fell 10.3% lower in March, but the damage was repaired in early April when analyst firm Rosenblatt said that the company's largest data center customers are ramping up their computing infrastructures very quickly at the moment.

Finisar (FNSR) followed in AAOI's footsteps in March, surging more than 10% higher around the announcement of Lumentum's Oclaro deal, but losing it all amid deafening radio silence. By the end of March, the stock had fallen 12.2% lower, and Finisar has not enjoyed any glowing analyst analyses in April.

All things considered, there's no doubt that high-speed networking will be a large and vibrant market for many years to come. The sector has its ups and downs, triggered by events such as regulatory crackdowns and rollouts of better and faster hardware generations. Both of those example headwinds were in full force in late 2017, and now things are looking up again.

It's a sector full of fantastic investment ideas. Even the losers in the upcoming upswing are likely to gain some ground in Oclaro-like buyout deals. Consolidation can be a powerful value builder.

That being said, Oclaro already got its buyout exit and is just waiting for the final regulatory approvals before cashing that check. AAOI is smaller and more volatile than Finisar, but also more profitable when times are good. There's a place for both of these stocks in many investing portfolios, each one seemingly tailored for a particular investing style. High-rolling growth seekers would go for AAOI every time, while those who prefer many years of proven success and a more stable financial platform can gravitate toward Finisar.