Please ensure Javascript is enabled for purposes of website accessibility
Log In Help Join The Motley Fool
Free Article Join Over 1 Million Premium Members And Get More In-Depth Stock Guidance and Research
By Rich Smith – Apr 12, 2018 at 11:12AM

With annual sales of $12.7 billion, Telefonica Brasil (VIV) is the largest telecommunications company in Brazil -- but not necessarily the best.

Over the past 12 months, shares of Telefonica Brasil have gained just 3%, underperforming the S&P 500 by more than 9 percentage points. They're lagging again today, with Telefonica Brasil stock falling more than 2% in response to a negative ratings move from JPMorgan. 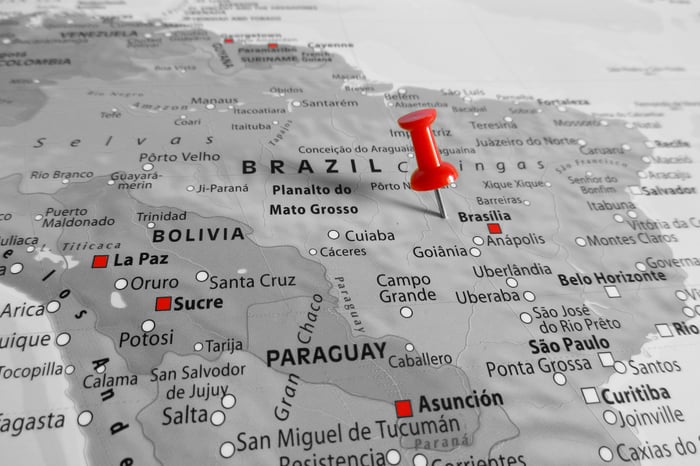 Telecom is a rough business (for investors). While telecoms can often attain near-monopoly status, this fact is well-known to regulators, making telecoms a regular target for antitrust regulators. At the same time though, one of the reasons telecoms often secure monopolies for themselves is because competing in this space requires massive up-front investments in infrastructure -- wire and cable planted in the ground, cellphone towers sprouting aboveground, and satellites circling in orbit.

One of the great things about Telefonica Brasil, though, is that despite being the biggest player in telecom in Brazil, the company's balance sheet and cash production actually look pretty good. (Local rival Claro occupies second place, with annual sales of just $9.6 billion, TIM Participacoes (TSU) is third with $4.8 billion, and NII Holdings a distant fourth with less than $1 billion in revenue.)

Although Telefonica Brasil does carry more debt than cash, its net debt position is only about $1.3 billion (quite reasonable for a stock with a $24.5 billion market capitalization, yielding an enterprise value of $25.8 billion). Helping keep debt in line is the fact that Telefonica Brasil pretty much always generates positive free cash flow from its business -- sometimes even more free cash flow than its reported net income would imply.

That's not always the case with its competitors. Rival NII Holdings, for example, has been burning cash for years, and TIM Participacoes was in a similar situation in 2014 and 2015.

Problem is, lately JPMorgan has noticed that "the quality and FCF gap" between Telefonica Brasil and its rivals has been "closing," making the company look less attractive relative to its rivals, as the analyst explains in a note covered on StreetInsider.com (subscription required). Last year, free cash flow at Telefonica Brasil dipped below $1.3 billion, or about $100 million less than its reported net income. This was the first time this had happened since 2015 (when, as already mentioned, both NII and TIM were actually burning cash).

What's worse, Telefonica Brasil announced last month that it plans to invest some $7.4 billion in new capital spending between now and 2020 -- roughly $2.5 billion a year, or about 10% more than it's been spending, on average, over the last five years. All that extra spending threatens to put a lid on free cash flow production at Telefonica Brasil.

At the same time, JPMorgan worries that Telefonica Brasil isn't growing as fast as its competitors. Earnings growth is pegged at 13.9% for Telefonica Brasil over the next five years, versus 30% growth  for No. 3 TIM Participacoes. The analyst further warns that despite its size, Telefonica Brasil doesn't seem to be benefiting enough from the Brazilian "economic recovery."

What all this adds up to is a moderation of JPMorgan's enthusiasm for Telefonica Brasil as a developing world growth play. This morning, JPMorgan is cutting its rating on the stock from overweight to neutral.

I think that's the right call.

Why? Consider: We've already established that Telefonica Brasil has an enterprise value of $25.8 billion. Divide the company's $1.3 billion in trailing free cash flow into that number, and you get an EV/FCF ratio of nearly 20 on the shares. That's not terribly expensive for a stock paying a 5.5% dividend yield and growing at 13.9%.

Total return works out to 19.4%, which seems to me a pretty fair price to pay for a stock with a 19.8 EV/FCF ratio, yielding an EV/FCF/growth ratio of just a hair over 1. Still, it's not obviously cheap. At the same time, TIM Participacoes, for example, sells for an EV/FCF ratio of 30, is pegged for 30% growth, and pays a more modest dividend yield of 0.7%. That works out to an EV/FCF/growth ratio of less than 1 -- actually a bit cheaper than the valuation on Telefonica Brasil.

While both companies are arguably priced fairly enough to bear watching -- and buying in the event of any significant pullback in price -- right now, I see no reason to prefer Telefonica Brasil stock over its rival TIM Participacoes.

Why Investors Are Running Away From Brazilian Stocks Today