Please ensure Javascript is enabled for purposes of website accessibility
Log In Help Join The Motley Fool
Free Article Join Over 1 Million Premium Members And Get More In-Depth Stock Guidance and Research
By John Bromels, Jeremy Bowman, and Daniel Miller - May 4, 2018 at 9:27AM

These top companies are built for the long haul.

A lot can change in 10 years -- just look at the Marvel Cinematic Universe. Superheroes come, supervillains go, and you never can tell what challenges are around the corner.

Assembling a portfolio of stocks is a bit like drafting a team of superheroes. Some will get stronger, others will never reach their full potential, and some may just vanish from your portfolio altogether.

But some additions to your portfolio will last for a decade -- or more -- and keep getting stronger every year. We asked three Motley Fool investors for their super dividend stocks that you'll wish you bought 10 years from now. They picked Royal Dutch Shell (RDS.A) (RDS.B), Starbucks (SBUX 3.87%), and General Motors (GM 5.55%). Here's why they think these investments will stand the test of time. 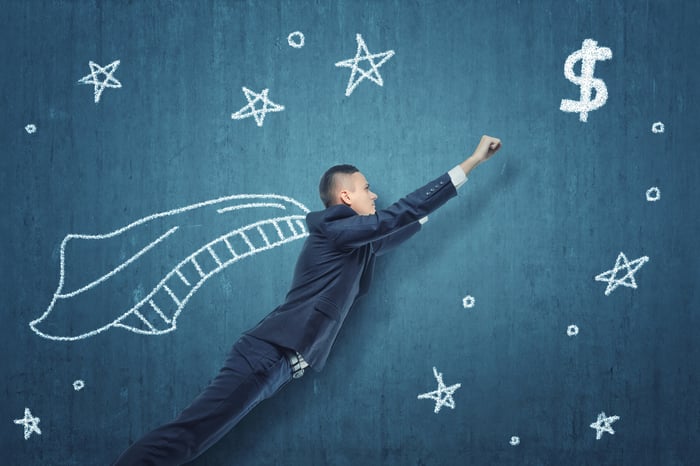 Like the best superheroes, dividend stocks can help your portfolio outperform for a decade or more. Image source: Getty Images.

John Bromels (Royal Dutch Shell): Ten years from now, I believe you'll be wishing you had bought shares of Royal Dutch Shell today. Not only will the company's stellar dividend yield -- currently about 5.5% -- have put money in your pocket for a decade, but the moves the integrated oil major is making to prepare itself for the future means it should still be performing well in a decade, even if the oil market isn't cooperating.

Shell is sitting in a sweet spot, thanks to the strict cost-cutting measures it implemented during the thick of the oil price downturn. With Brent crude prices above $60 per barrel for more than six months -- and nearing $75 per barrel today -- those measures are now paying off in spades. The company's most recent quarter was a bonanza, with net income up 66.7% year over year, to $5.9 billion. It's paying off short-term debt and raking in cash.

But it's not just the short term that looks good for Shell. In 2017, Shell divested a number of underperforming assets, with a goal of dropping some $30 billion in assets by the end of 2018 to improve its margins even further. It expects to start a share repurchase program soon that will boost earnings per share. Meanwhile, it has expanded its liquefied natural gas business, a market it expects will grow even faster than oil in coming years. That should help keep the company afloat even if the oil market softens five or 10 years down the road. Smart investors will jump on board and come along for the ride.

Jeremy Bowman (Starbucks): Dividend growth stocks are hard to find as dividend payers tend to be mature, slow-growth companies. However, some newer dividend payers can be more promising, as they usually have more growth ahead of them. Starbucks offers one such example.

The coffee titan paid its first dividend in 2010, and since then has increased it by at least 20% each year. What was once a (split-adjusted) $0.05 quarterly payout is now $0.30, and I'd expect more solid growth ahead.

While the company has disappointed in recent earnings reports, it still has promising growth opportunities ahead in China, digital, and premiumization, and management envisions growing earnings per share by 12% annually over the long term. Even if dividend growth slows to that pace, Starbucks investors will be rewarded over time. Assuming a 12% increase over the next 10 years, Starbucks' dividend would more than triple in that time to $0.93.

And there's a good chance Starbucks' dividend will grow even faster, as the company's payout ratio is 55%, meaning it has room to increase its dividend more aggressively than its earnings grow. Doing so could allow the dividend to quadruple over the next 10 years.

If Starbucks can execute its goals, its growing dividend is sure to reward long-term investors. It's the rare dividend stock that can offer both yield and growth.

GM will evolve over the next decade

Daniel Miller (General Motors): A dividend stock that many income investors are overlooking and might end up wishing they had bought a 10 years from now is General Motors. GM has certainly faced its share of adversity over the past decade, but the company is in a completely different situation as it focuses on the next decade.

Once plagued by near-sighted strategic decisions and poor-quality vehicles, management now has taken a huge step forward investing in and developing what will become a future business model that isn't solely dependent on selling vehicles -- and that's significant for investors historically cautious about investing in a capital-intensive and cyclical industry.

While the cyclical business of producing and selling cars will remain, GM hopes to generate new streams of revenue and profits over the next decade with a business model that will include car sharing, OnStar, and smart mobility services. Add to those services a new market for autonomous vehicles and the servicing, fleet management, and big data that will go with those products, and the future for GM is both very intriguing and wide-ranging.

If 10 years from now General Motors generates a respectable chunk of its top and bottom line from smart mobility projects and services, in addition to potentially leading in autonomous vehicle technology, its current dividend yield of almost 4% will be one investors wish they owned.