Please ensure Javascript is enabled for purposes of website accessibility
Log In Help Join The Motley Fool
Free Article Join Over 1 Million Premium Members And Get More In-Depth Stock Guidance and Research
By Dan Caplinger - May 7, 2018 at 3:32PM

Find out which of these companies made an acquisition play.

Monday was a positive day on Wall Street, with market participants being generally pleased with news that crude oil pushed above the $70-per-barrel mark before falling slightly below it. That helped lift the energy sector up, although some other concerns held back certain other sectors, limiting gains in most major indexes to less than 1% on the day. Moreover, some companies made announcements that were ill-received by the market. International Flavors & Fragrances (IFF 0.12%), Tower Semiconductor (TSEM -1.02%), and Dentsply Sirona (XRAY 1.31%) were among the worst performers on the day. Here's why they did so poorly.

Is IF&F making a mistake?

Shares of International Flavors & Fragrances fell 11% after the company announced a deal to purchase rival Frutarom Industries in a cash and stock deal worth more than $7 billion. Under the terms of the offer, IF&F will pay Frutarom investors $71.19 per share in cash as well as 0.249 shares of IF&F for every Frutarom share they own. IF&F argues that the move should help it "create a global leader in taste, scent and nutrition" by bringing together two complementary businesses, and Frutarom's greater exposure to the natural products side of the business should help IF&F shore up its strategic assets in a growing part of the industry that reflects shifting consumer preferences. Yet investors fear that the acquisition bid was too high and that the payoff won't be large enough to justify the price in the long run. 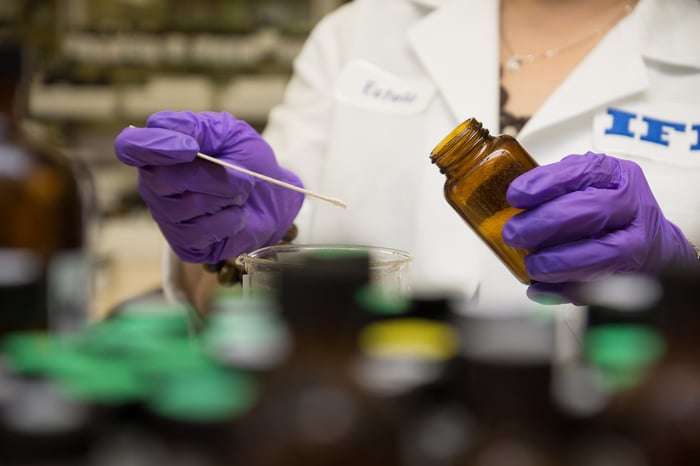 Tower Semiconductor stock dropped 9% in the wake of the release of the company's first-quarter financial results. Weak seasonal impacts were only partially responsible for a 5% year-over-year decline in sales, and adjusted earnings fell by more than a third from year-ago levels. The specialty foundry company also said that it expects sales for the second quarter to come in between 5% lower and 5% higher than they were in the second quarter of 2017, arguing that the resulting sequential gain compared to the first quarter of 2018 should give investors cause for optimism. Yet despite some potentially lucrative project wins, investors still seem skeptical that Tower will turn things around quickly.

Finally, shares of Dentsply Sirona lost 6%. The dental solutions company reported a 6% rise in revenue from year-ago levels during the first quarter of 2018, but that came entirely from favorable currency fluctuations, and U.S. revenue dropped 7% compared to the first quarter of 2017. Moreover, Dentsply also cut its bottom-line guidance for the full year by $0.15 per share, now expecting adjusted earnings of between $2.55 and $2.65 per share. Despite the constant demand for the company's dental and orthodontic products, investors aren't comfortable that they'll be able to avoid a potentially even bigger headache from Dentsply in the near future.

The 3 Worst-Performing Stocks in August