Samsung (NASDAQOTH: SSNLF) Electronics recently reported its financial results for the first quarter of 2018. Samsung Electronics is a large conglomerate that consists of many different businesses, but the one that many consumers, and even investors, focus on is its mobile device business, which is the largest smartphone maker in the world by unit shipment volumes.

Last quarter, Samsung's mobile business performed quite well, with revenue up 23% year over year and operating profit up 82%. The company attributes this strong performance to the early launch of its flagship smartphones, the Galaxy S9 and Galaxy S9 Plus, as well as continued sales of its prior-generation Galaxy S8 series devices. 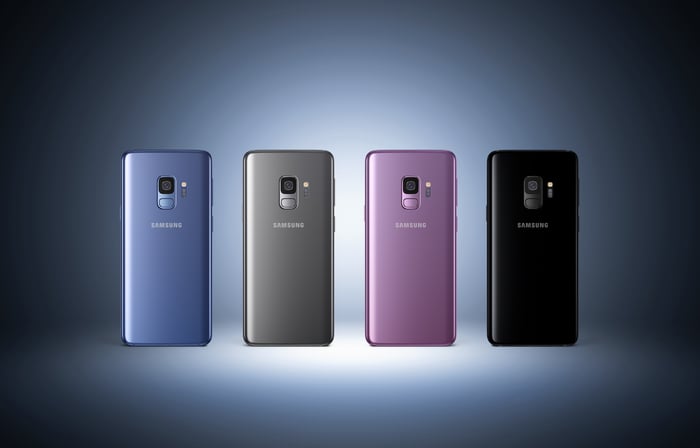 However, in the coming quarter, Samsung says that it expects a decline in the profitability of its mobile business caused by "stagnant sales of flagship models amid weak demand and an increase in marketing expenses to address the situation."

Let's dive a bit deeper into how Samsung expects to fight this trend over the course of the year.

Samsung said in its earnings presentation that for the second half of 2018, it aims to "secure solid earnings" by cranking out new smartphones across various price ranges, "streamlining" its smartphone offerings at the low end and mid-range, and "enhancing services such as Bixby 2.0." (Bixby is the name of Samsung's digital assistant.)

Samsung's strategy seems like a reasonable one: As the overall smartphone market stagnates, the company's best chance of trying to generate growth (thereby outperforming the market) is to try to gain market segment share at the expense of the competition.

Releasing compelling new hardware and -- to a lesser extent -- services tends to be an effective way to try to capture market share. Higher market share means revenue growth, and as long as that revenue comes at positive gross profit margins (which they are practically guaranteed to), higher profits, too.

Moreover, Samsung's intent to "secure solid earnings" by, in part, "streamlining" its low-end and mid-range smartphone offerings likely means that the company will reduce the number of offerings at those price points. Such a simplification will allow Samsung to concentrate its development and marketing efforts on a smaller set of products, potentially boosting the profitability of its mobile device business according to plan.

One thing that investors should be aware of is that while Samsung's mobile device business is certainly a meaningful part of the company, it's by no means the most important.

For some context, a full 73.8% of Samsung Electronics' operating profits last quarter came from its semiconductor business (which primarily sells memory products like DRAM and NAND) -- just 24% came from its mobile business.

Samsung is fundamentally a memory/component company that also happens to be the world's largest smartphone vendor. The performance of the smartphone business is and will continue to be significant, but if that's the only business you focus on, you'll be missing the bigger picture.