Please ensure Javascript is enabled for purposes of website accessibility
Log In Help Join The Motley Fool
Free Article Join Over 1 Million Premium Members And Get More In-Depth Stock Guidance and Research
By Timothy Green – May 9, 2018 at 6:10PM

It's way too early to celebrate Pandora's subscription growth.

Music-streaming company Pandora (P) finally launched an on-demand subscription service in early 2017. Pandora Premium, priced at $9.99 per month, directly competes with Spotify and Apple Music. The company's goal is to convert a significant chunk of its ad-supported listener base into subscribers. In addition to the new on-demand service, Pandora offers an ad-free version of its core internet radio experience for $4.99 per month.

Pandora's business model of relying mostly on advertising revenue just doesn't work. The company has never turned a profit, and it lost an astonishing $518 million last year on $1.47 billion of revenue. The core problem is simple: Content costs eat up such a high percentage of revenue that there's just not enough left over to cover other expenses. 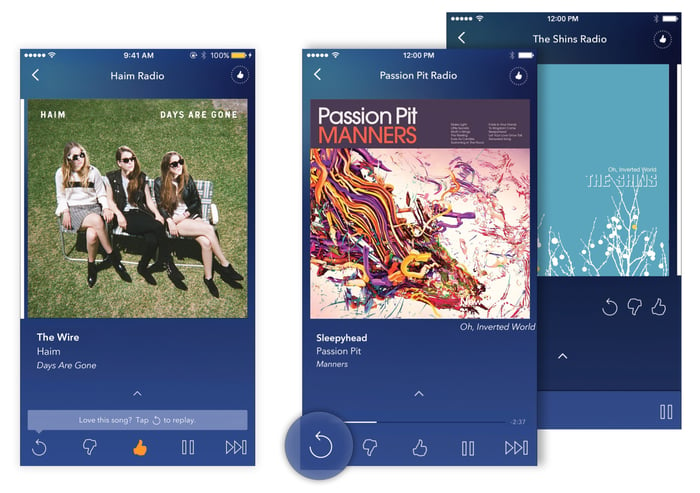 Pandora pays rates based on direct license agreements in some cases, and it pays rates set by the Copyright Royalty Board in other cases. Becoming bigger hasn't helped Pandora at all -- the bottom line has only sunk deeper into the red despite the company's increased scale. Subscriptions could turn things around, at least in theory. A more stable source of revenue coupled with potentially higher revenue per listener compared to the ad-supported model might be enough to start moving the needle in the right direction.

Or it might not be enough. So far, the content costs situation has only gotten worse, despite impressive growth in the subscription business.

This mix shift toward subscriptions didn't change anything about Pandora's content costs problem. In fact, content costs as a percentage of revenue actually increased in 2017. 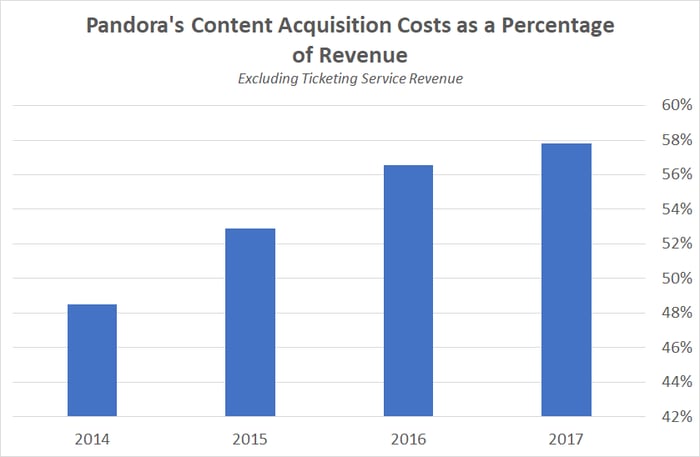 This increase is despite subscription revenue accounting for 22.7% of revenue, excluding the divested ticketing service, in 2017, up from 17.4% in 2016.

Maybe things will start to look better as the subscription business grows. But the early results are not encouraging.

No one has figured out how to make money streaming music. Pandora has been drowning in losses since its founding. Spotify, which recently sold shares to the public, posted an operating loss of 378 million euros on 4.1 billion euros of revenue last year. That's despite having 75 million subscribers.

What about Apple Music? Apple CEO Tim Cook said in an interview earlier this year that the company is "not in it for the money." That's because there is no money. Apple Music adds to Apple's ecosystem of products and services, but it's never going to be a profit center for the company.

Spotify is much bigger than Pandora and losing money. Apple isn't even trying to make money. It's hard for me to see any reason to believe that Pandora has a real shot at becoming a sustainable, profitable company, barring some drastic change in how it pays royalties for songs.

Pandora has had some success growing its subscription business, and the stock has jumped as a result. But I don't see a good reason to be optimistic.