These releases aren't a coincidence. Facebook management noted that WhatsApp Status has grown to become "by far the biggest" of its Stories products during its first quarter earnings call just a few days before Snap's earnings release. But management likely held back from providing a number until Snap's earnings, so as to make for an easy comparison between the two.

And the comparison is not good for Snap. Snapchat ended the quarter with just 191 million daily active users. WhatsApp Status has added about 150 million users in just the past six months, and it's well over twice the size of Snapchat now. 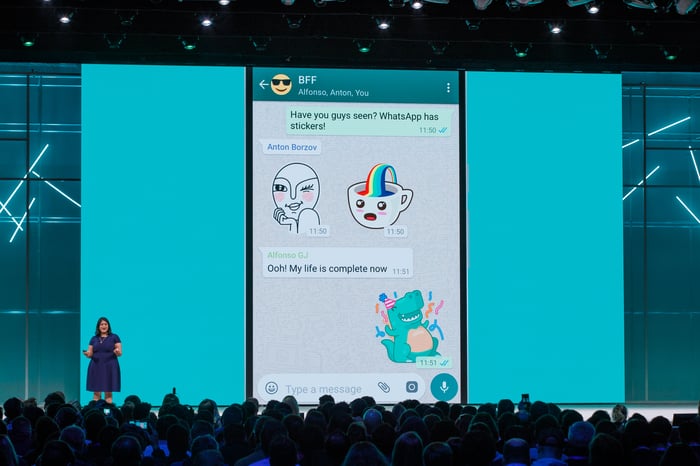 A reminder to everyone

One reason Facebook might like to drop these user numbers the same days as its competitors is to create a clear reminder to advertisers, investors, and everyone else that there's no replacement for Facebook and its massive reach. COO Sheryl Sandberg is fond of saying things like "Facebook has a 'Super Bowl' on mobile every day," relating the size of Facebook's audience to the most popular television event of the year.

And not only is Facebook massive, it's growing quickly, especially when you look at its properties on an absolute basis.

As mentioned, it took just six months for WhatsApp Status to add its most recent 150 million daily users. Additionally, Instagram is adding hundreds of millions of users per year now, as it marches toward becoming Facebook's next billion-user app. Over the last five quarters, Facebook has added the exact same number of monthly active users as Twitter has in its entire life: 336 million.

If you want to reach a large audience with your advertising, Facebook offers better access to the types of people you want to reach than practically anyone else. Even in the face of the recent Cambridge Analytica scandal, most advertisers are hard-pressed to ditch Facebook because Twitter and Snapchat can't offer the same consumer reach.

Snap disappointed investors with its first-quarter earnings results, adding just 4 million daily active users sequentially and generating revenue of just $231 million. But investors would be more than happy to hear that WhatsApp generates as much revenue as Snap.

It doesn't. But with more than twice as many users on WhatsApp Status compared to Snapchat, Facebook could be very close to monetizing the app it bought for nearly $22 billion in cash and stock.

WhatsApp and Snapchat are actually quite similar. Both are primarily used for communication with friends and to post updates throughout the day. Snapchat branches off with its Discover section, which curates content from third-party publishers. WhatsApp, meanwhile, has a growing number of verified business on the app that use it for customer service.

That means WhatsApp could quickly provide about $2.5 billion in incremental revenue just by creating ad products for WhatsApp Status similar to Snap Ads and sponsored lenses and filters. That's not insignificant, even for a company generating $50 billion-plus in ad revenue per year.