The answer depends a lot on how much you're willing to spend to find it.

In 2016, archaeologists working at a dig site in Bulgaria came across a tiny but significant find: A gold bead measuring about an eighth of an inch in diameter, which scientists believe may be the oldest piece of refined gold jewelry ever discovered -- dating back as far as 4600 B.C.

This discovery holds significance not just to scientists but to investors as well. Simply put, it means that humans have been mining and refining gold for more than 6,600 years. And if that's true, gold investors may wonder: After seven millennia of exploitation, how much gold is left in the world to be discovered, mined, and refined in the future? 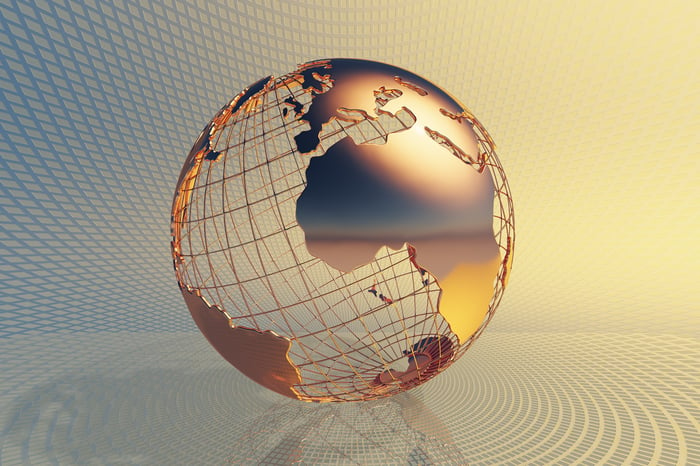 There's plenty of gold on Earth. It's just not all in one easily accessible place. Image source: Getty Images.

How much gold has been mined already?

Industry trade group The World Gold Council estimates that since that first gold bead was smelted, humans have mined roughly 190,000 metric tons of gold -- roughly 77% of global recoverable reserves. And because gold is practically indestructible, most of that mined gold is still here today in the form of jewelry, gold coins, gold bullion (i.e., bars of gold), and electronics. (Gold is useful as a conductor that does not tarnish).

Interestingly, most of this gold was only mined in the last half-century. Gold has been considered valuable and has been used as both jewelry and currency for most of recorded world history, which stretches back more than 7,000 years. And yet, the first 6,800-odd years of that history (through 1835) saw less than 20,000 metric tons of gold produced. It took the California Gold Rush, from 1848 to 1855, to push total global historical gold production past 20,000 metric tons. The next century, however, saw a tripling in cumulative gold production to 60,000 metric tons by the early 1940s, followed by a rapid 50% increase to 90,000 metric tons over the next three decades.

How much mineable gold is left?

The World Gold Council estimates that remaining reserves worldwide amount to just 30% of what's been mined already -- 54,000 metric tons of gold in sufficient concentrations, and buried at sufficiently accessible depths, to be mined at reasonable cost.

At recent global production rates of roughly 3,100 metric tons per year, that means that in less than 20 years, all recoverable gold reserves worldwide (or at least those that can be recovered at a reasonable cost) should be depleted. .)

How mining companies are affected

As gold reserves get depleted and new gold deposits get harder to find, production costs have risen over time, which could potentially crimp profitability at the world's gold miners. In 2004, for example, gold miner Barrick Gold reported an average cost of production of just $300 per ounce of gold it mined. By 2011, this figure had more than doubled to $630 per ounce, and it continued rising to $800 an ounce in 2014. Production costs have leveled off since, with Barrick reporting a $780 cost of production last year, according to data provided by S&P Global Market Intelligence.

The story has been similar at larger gold miner Newmont Mining. Newmont reported gold production costs per ounce of $278 in 2004, jumping to $752 in 2011, then $920 in 2014, but its cost of production has likewise leveled off, averaging $922 in 2017. On one hand, this recent plateauing of costs may reassure investors that gold production costs don't have to inexorably rise.

On the other hand, the sharp increase in production costs over just the last 15 years, combined with the inescapable math showing how quickly miners are churning through Earth's remaining recoverable gold reserves, suggests that in years to come, production costs could well begin rising again as the world runs out of unmined gold. As long as gold producers are able to sell gold at prices above their cost of production (i.e., assuming the historical trend of gold pricing at a premium to production costs holds ), though, this should keep demand for gold high, and keep miners digging for it.

Will the market reach peak gold?

Fears that there may not be much unmined gold left in the world might remind some investors of similar worries about the limited amount of oil on Earth. A little over a decade ago, with the price of a barrel of crude rocketing to well over $100 a barrel, analysts at Goldman Sachs came out with their famous prediction that oil prices would surge as high as $200. Earth was rapidly approaching -- or may even have passed -- the point of "peak oil production," and as oil-starved consumers -- both motorists and industrialists -- bid against one another for each of the few gallons of gas remaining, the price of oil could only go up.

Could the same thing happen with gold? It depends.

Why the amount of recoverable gold could change over time

Part of the reason that peak oil didn't happen earlier this decade, and part of the reason oil prices collapsed in 2014, is that the amount of oil (or gold) in the world isn't a hard and fast number at all. Rather, it fluctuates with technology, with humankind's inventiveness at finding new ways to exploit the kinds of resources that it really wants, and with prices. (Simply put, the more oil costs, the more explorers can afford to spend to find and extract it -- which makes more oil recoverable, increasing reserves.)

In the case of oil, fracking technology that was first pioneered in the 1940s was refined (if you'll pardon the pun) in the 21st century as a way to unlock previously unexploitable oil deposits. High prices were an incubator for efforts to commercialize fracking and other techniques such as horizontal drilling. When those techniques became commercially viable, it opened up several billions of barrels of oil that were previously deemed unextractable. Which has led to lower prices today.

Could something similar happen with gold? Perhaps.

How much gold is needed for mining to be viable?

New ways to mine gold?

At lower densities. Experts surmise that even at the ultra-diluted levels of average concentration, the top four kilometers of Earth's crust alone contain as much as 122 billion metric tons of gold (let alone what's in the seas). This suggests that if new technologies should be developed permitting profitable extraction of gold at lower-than-usual gold densities, there could be a lot more gold left in the world -- discoverable, mineable, and refineable -- than currently seems to be the case.

From the seafloor. Alternatively, gold miners might choose to become gold divers. Recent discoveries of precious metals deposits surrounding thermal vents on the seafloor suggest that certain prime seabed locations could contain gold deposits at concentrations of as much as 6 grams per metric ton. That's four times as rich as Barrick Gold's average asset, and five times Newmont's. Should such deposits turn out to be common, the rising price of gold combined with the diminishing supply of gold on land could spur a new gold rush underwater -- and multiply the amount of gold that (we thought) was left in the world.

In space. Even if all gold reserves on Earth were to be exhausted, the world might still not run out of gold. Looking skyward, astrophysicist Neil deGrasse Tyson has suggested that individual space rocks making up the Asteroid Belt could be literally loaded with gold -- perhaps as much as a half-ton or more contained in the core of any given asteroid. While Dr. Tyson didn't go so far as to promise that this would be true of every asteroid in the Belt, there are more than 150 million asteroids of more than 100 meters in diameter in the Asteroid Belt to choose from. If even a small portion of those space rocks contain gold, it could dwarf the amount of this element readily accessible on Earth's surface. As gold reserves on Earth dwindle, and gold prices on Earth rise, this could spur explorers and developers to find new sources of gold out where no miner has gone before.