Please ensure Javascript is enabled for purposes of website accessibility
Log In Help Join The Motley Fool
Free Article Join Over 1 Million Premium Members And Get More In-Depth Stock Guidance and Research
By Dan Caplinger - May 24, 2018 at 6:44PM

Find out how the lined-boot manufacturer wants to get through the summer.

Sheepskin-lined boots can be cozy and warm during the winter months, and the popular Ugg line of footwear has been the biggest contributor to Deckers Outdoor's (DECK -3.24%) success over the years. Fashion trends can be fickle, though, and a slump from 2015 until last year left some shareholders looking for better alternatives for Deckers to pursue.

Coming into Thursday's fiscal fourth-quarter financial report, Deckers investors wanted more concrete evidence that the shoemaker is on the right path. Deckers' results gave shareholders almost exactly what they wanted to see, pointing toward renewed growth and pushing the stock ever closer to its all-time record highs from 2011. 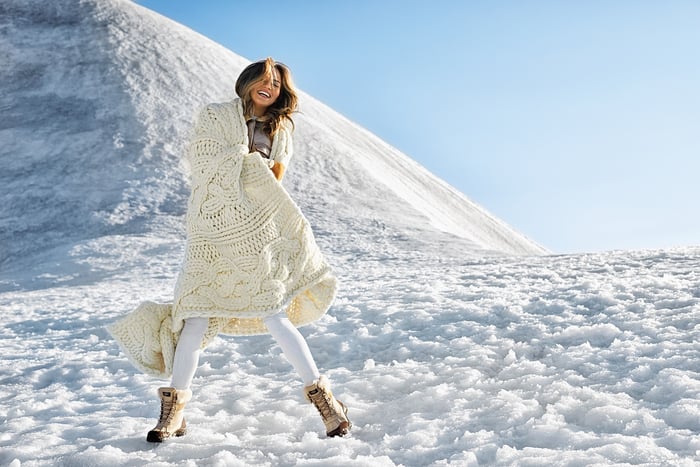 Deckers Outdoor's fiscal fourth-quarter results confirmed that the footwear specialist is seeing its growth accelerate. Revenue rose 8% to $400.7 million, doing far better than the sluggish 2% growth rate most investors were looking to see. The company reversed a year-ago loss, and adjusted earnings of $0.50 per share were markedly higher than the $0.19 per share consensus forecast among those following the stock.

Fundamental strength throughout Deckers' entire brand line was essential in producing the favorable numbers. Uggs segment sales were higher by 6% from year-ago levels, making up more than 60% of total sales for the company. The red-hot Hoka One One line of shoes continued its outperformance, with sales of the brand soaring by more than a third. Growth in the Teva slipper line amounted to 7%, while even the long-struggling Sanuk product offering managed to see its sales climb 10% compared to the fourth quarter of fiscal 2017.

Looking at Deckers' channels, a more typical relationship reasserted itself during the quarter. Wholesale net sales were up 2% for the quarter, reflecting in large part the ongoing challenges that brick-and-mortar resellers are having with their traffic overall. Yet the direct-to-consumer segment saw sales soar 18% from year-ago levels, with comparable sales rising 15%. Geographically, U.S. and international growth rates were almost identical during the quarter at between 8% and 9%.

CEO Dave Powers was happy with the performance. "We closed fiscal 2018 on a high note," Powers said, "as we exceeded expectations for the fifth consecutive quarter." The CEO pointed to record revenue for the full fiscal year and a massive improvement in operating margin and earnings as evidence of the success of the company's broader strategic vision.

What's ahead for Deckers Outdoor?

Deckers is convinced that it's on track to keep moving in the right direction. Following Deckers' adjusted earnings growth of 50% for the full year, Powers thinks the company can "enhance its industry competitiveness through the continued execution of our operating profit improvement plan and strategic focus."

Guidance for the coming 2019 fiscal year was also encouraging. The company expects to bring in net sales of $1.925 billion to $1.95 billion, which is consistent with the consensus forecast among those who are watching Deckers. Adjusted earnings of $6.20 to $6.40 per share would be well above the $5.97 per share that most expect to see, and Deckers expects good margin performance to continue. For the typically slow fiscal first quarter, Deckers projects sales of $225 million to $235 million and net losses of $1.41 to $1.50 per share.

Finally, Deckers ramped up its repurchase efforts, spending $125 million to buy back 1.34 million shares. With the stock price now back above $100, the move looks well timed, and Deckers says it has more than $250 million remaining in authorized repurchase capacity as of March 31.

Deckers shareholders celebrated the news, and the stock was higher by 4% in after-hours trading following the announcement. With the company's potential turning point now behind it, fiscal 2019 could be a year of reaping the rewards for patient investors in the shoemaker.