Shares of Bristow Group (NYSE:BRS) stock closed down 20.2% on Thursday, one day after reporting fiscal year-end earnings that actually looked a bit better than Wall Street had predicted.

Bristow reported sales of $341.2 million in its final quarter of the year, just shy of the $342.7 million that analysts had anticipated. The company's adjusted loss for the quarter, on the other hand, $0.48 per share, was quite a bit less than the $0.66 analysts had expected Bristow to lose -- an "earnings beat." 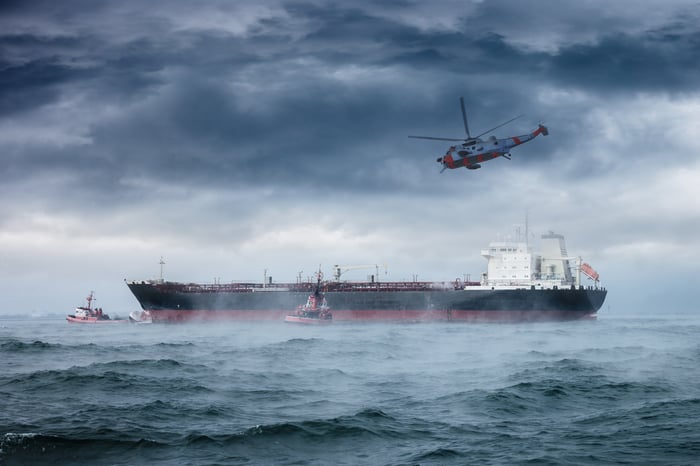 That being said, a loss is still a loss -- and in Bristow's case, the loss was arguably a lot worse than the company's "adjusted" results suggest. Calculated according to GAAP accounting principles, Bristow's loss for the quarter came to $2.84 per share, 28% more money than it had lost in the year-ago quarter, and swelling its loss for the full fiscal year to $5.54 per share. This was despite sales growing 5% year over year.

Bristow, which provides search and rescue (SAR) services in addition to its main business ferrying crew and equipment for the offshore oil and gas industry, noted that its SAR division was the big revenue driver in Q4, growing sales 33%. This helped to mitigate the small decline in oil and gas services revenue and deliver the sales gain.

Losses for the quarter were worsened by a series of one-time charges for asset impairments, organizational restructuring, and charges taken for early extinguishment of debt, among others.

Bristow's guidance didn't help matters much, either. Concluding its report, Bristow warned investors that its sales this year will range between $1.25 billion and $1.35 billion, thus a bit short of the $1.4 billion Wall Street had been anticipating.

I'm not sure the small variance in sales guidance justifies such a steep sell-off today -- even when combined with the even smaller shortfall in Q4 revenue. But with Bristow stock unprofitable and seemingly headed for another unprofitable year in fiscal 2019, investors don't appear to be in a forgiving mood.