General Motors (NYSE:GM) says that its upcoming all-new 2019 Chevrolet Silverado will be offered with an option unique among full-size American pickups: a four-cylinder engine.

To be clear, this four-cylinder isn't the usual econobox motor. It's an all-new, big turbocharged gasoline engine that incorporates GM's latest power- and efficiency-maximizing technologies.

But still, putting a four-banger in a full-size pickup sounds like something GM might have tried back in, say, 1979, when Detroit was trying desperately to compete with fuel-efficient imports. Does GM really think that truck buyers in 2018 will go for four cylinders? 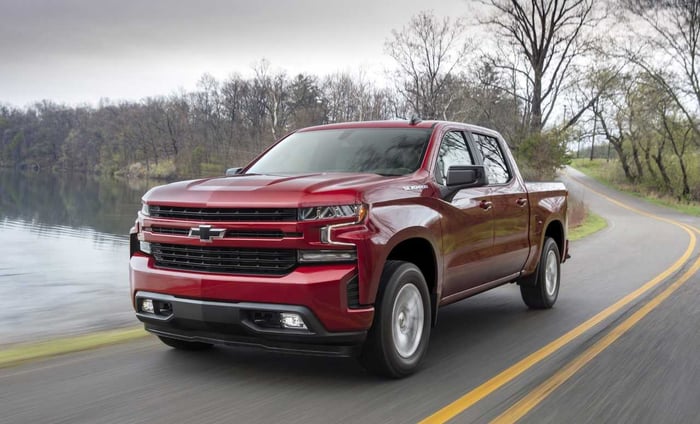 Taking a page from Ford's playbook

Here's one word that explains why GM thinks they might: EcoBoost.

But it wasn't always so. Back in 2011, when Ford first added an EcoBoost V-6 as an option on the F-150, the idea seemed nearly outrageous. At the time, aside from low-cost entry-level models, nearly all full-size American pickups were sold with V-8 engines.

Ford's EcoBoost engines did a lot to change that. Truck buyers who chose them got horsepower and torque comparable to a traditional V-8, with improved fuel economy. Once the engines proved durable, they became widely accepted, and Ford added a second EcoBoost option in 2015. Today, about 72% of F-150s are ordered with one of the two EcoBoost V-6s, according to a Ford spokesperson.

I think GM is taking a page from Ford's playbook with its new four-cylinder. 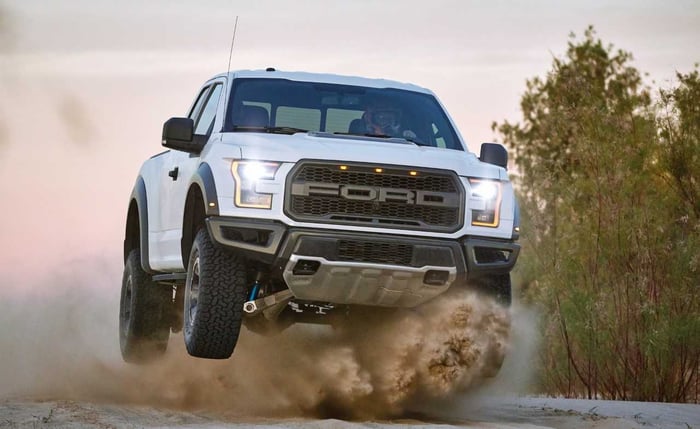 GM said that its new four-cylinder will replace the 4.3 liter V-6 it offers on the mass-market LT version of the current Silverado. The new engine, developed specifically for trucks, is a 2.7 liter unit that makes 310 horsepower and a hearty 348 foot-pounds of torque -- considerably more than the 4.3 liter V-6.

And it's no slug: GM said that a 2019 Silverado with the 2.7 liter four-cylinder will go from 0 to 60 miles per hour in less than seven seconds. The total package will weigh 380 pounds less than the current Silverado with a 4.3 liter V-6, and it will have payload and towing capabilities comparable to the V-6 entry-level versions of the F-150 and Fiat Chrysler Automobiles' (NYSE:FCAU) Ram 1500, GM said.

In other words, GM is saying that the new 2.7 liter four-cylinder will have all the capabilities of a V-6, but with better fuel economy. Doesn't that sound familiar? 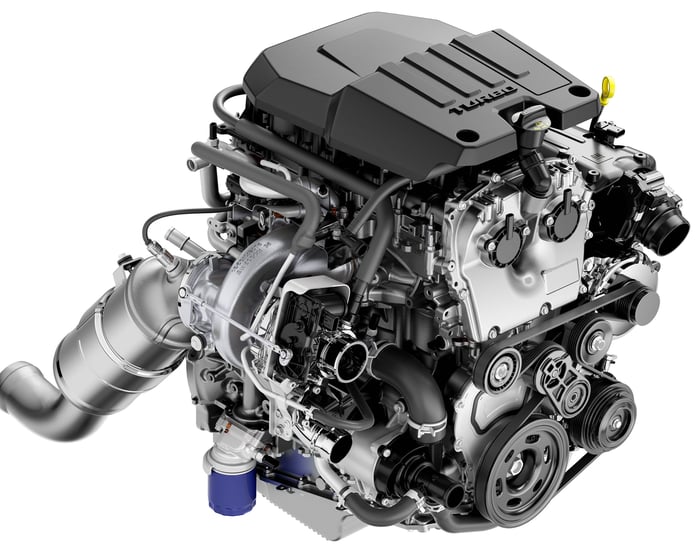 Of course, V-8s will still be optional

GM said that the 2.7 liter four-cylinder will be standard on LT and RST versions of the all-new Silverado. GM will offer updated versions of its 5.3 liter and 6.2 liter V-8s as options, along with an all-new diesel engine that will debut next year.

But the 2.7 isn't replacing the old 4.3 liter V-6 entirely. At least at first, GM will continue to offer the old 4.3 liter V-6 on the most basic Silverado trims, the ones most often sold to fleet customers. That may be about costs -- the V-6 is probably less expensive to produce -- and it might also be to assuage possible concerns among fleet buyers about the reliability and longevity of an all-new turbocharged engine.

But I suspect that if the new 2.7 liter engine proves to be reliable, it'll become the default for fleet buyers as well. And don't be surprised if GM offers it in the upcoming all-new version of its big truck-based Chevrolet Tahoe SUV as well.

Long story short: As long as the new engine proves durable, it'll sell fine -- and it should help keep GM's big gasoline-powered pickups and SUVs rolling off of production lines for a while longer.