Please ensure Javascript is enabled for purposes of website accessibility
Log In Help Join The Motley Fool
Free Article Join Over 1 Million Premium Members And Get More In-Depth Stock Guidance and Research
By Leo Sun – Updated May 30, 2018 at 2:52PM

Will Apple chase Microsoft deeper into the 2-in-1 market?

Apple (AAPL -3.00%) is developing a new ARM-powered device, according to 9to5Mac, but no one seems to know what it is -- except that it's code-named "Star" and its model number is N84. The code name is raising eyebrows, since Xerox's Star workstation from the early 1980s was the first commercial device to use the modern icon, folder, and mouse-based graphical user interface (GUI).

Apple and Microsoft (MSFT -1.94%) both replicated the original Star's GUI in the development of their Mac and Windows operating systems. 9to5Mac claims that Taiwanese manufacturer Pegatron has already produced the new Star's initial prototypes and shipped them to Apple, but that the device probably won't actually ship until 2020.

9to5Mac claims that Star will be an ARM-powered device sporting a touch screen, a SIM card slot, GPS, compass, and waterproof housing -- features that make it sound like a smartphone or tablet. However, it will also run the Mac's Extensible Firmware Interface (EFI) boot system, which suggests that Star could be an ARM-powered Mac or hybrid iPad.

Apple is also classifying Star in a new device family, and will run a "derivative" version of iOS. So will Star be a new phone, a hybrid laptop, or something completely different?

Apple took a big leap toward making a hybrid laptop with the introduction of the iPad Pro in 2015. The device was clearly designed to counter the growing popularity of Microsoft's (MSFT -1.94%) Surface and similar Windows 2-in-1 devices.

Apple followed the Surface by adding a smart keyboard cover and stylus to the iPad Pro, but it avoided merging iOS with macOS into an "all-in-one" OS for PCs and mobile devices like Microsoft attempted with Windows 10. Merging iOS and macOS could bring all of Apple's hardware onto the same page, but CEO Tim Cook doesn't agree with that approach.

At an Apple event in Chicago in April, Cook stated that both operating systems performed well because Apple "pushed them to do what they do well," but that merging the two would result in "trade offs and compromises" -- and that he didn't think that was "what users want."

However, Alphabet's Google is also following Microsoft's lead by blurring the lines between Chrome OS and Android. The latest version of Chrome OS runs Android apps, and Google is reportedly getting ready to replace Android with Chrome on most tablets. This would enable Chromebooks and Android tablets to seamlessly shift between desktop and mobile modes in a manner similar to Windows 10 devices. 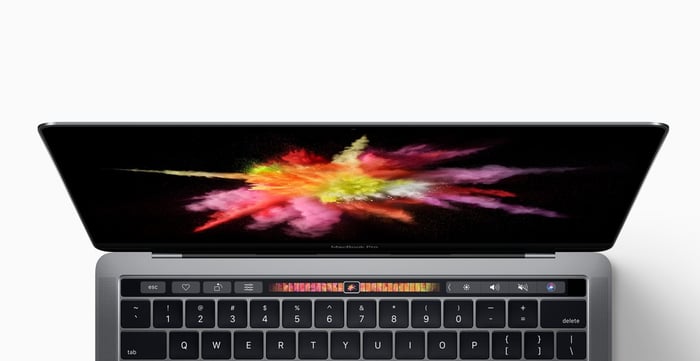 Microsoft and Google's preference for merged operating systems could be forcing Apple to produce an ARM-based Mac that runs a "derivative" version of iOS to bridge the gap between iOS and macOS. This device would also allow Apple to finally replace Intel's Mac processors with its own silicon.

However, such a device could face backwards compatibility issues, since macOS software is designed for x86 processors and iOS apps are designed for ARM chips. It might try emulating its older x86 software on iOS, but that's been a hit-or-miss solution for ARM-powered Windows 10 laptops.

But it could also just be a cheaper iPhone

Launching an ARM-powered Mac that runs iOS apps would be a daring move for Apple. However, Bloomberg's Mark Gurman claims that Star is merely a low-cost LCD iPhone that shares the same design as the iPhone X.

That news wouldn't be surprising, since previous reports claimed that Apple would launch cheaper LCD iPhones resembling the iPhone X later this year. However, Gurman's report contradicts 9to5Mac's claims that the device will run EFI, belong to a new device family, and arrive in 2020. Therefore, some of the leaked details might be inaccurate, or Star and N84 might actually be two different projects.

Apple rumors are a dime a dozen, so investors should take all this buzz with a grain of salt. Nonetheless, it will be interesting to see if Star or N84 could evolve into a new product family that diversifies Apple's business away from iPhones, iPads, and Macs.