Please ensure Javascript is enabled for purposes of website accessibility
Log In Help Join The Motley Fool
Free Article Join Over 1 Million Premium Members And Get More In-Depth Stock Guidance and Research
By Asit Sharma - May 31, 2018 at 2:32PM

Understanding if recent menu changes will benefit, or degrade the company's performance.

In the first quarter of 2018, Dunkin' Brands Group (DNKN) completed the rollout of a menu simplification initiative to its entire base of roughly 9,000 Dunkin' Donuts U.S. stores. The effort reduced corporate-required menu items for franchisees by 10% and dispensed with 23 optional products, which David Hoffman, president of Dunkin' Donuts U.S. and Canada, labeled as "slow moving, complex, and off-strategy."

While celebrating the completion of an arduous project, management also noted that menu simplification would present a drag of 100 basis points on the Dunkin' U.S. system's comparable sales, at least through the next quarter. Dunkin' U.S. "comps" are already under pressure, having decreased 0.5% during the first quarter of 2018, partially due to the new streamlined menu.

Some analysts on the Dunkin' Brands' earnings conference call on April 23 voiced skepticism that the company would meet its 2018 projected guidance of a 1% increase in U.S. comps. My colleague Rich Duprey also recently expressed doubt on this matter. Removing menu items depresses sales slightly, as it can take some time for core customers to adjust their purchasing patterns once a favorite drink or beverage goes missing.

A revenue hit now equals higher profitability in the future

Is the winnowing exercise going to help the quick-service giant? There are several good reasons to sacrifice near-term sales for an increase in simplicity. An overly extensive menu, especially one which features numerous products of moderate-to-high preparation difficulty, can bump up labor cost in a restaurant, as complexity has a direct effect on preparation time.

Dunkin' hasn't embarked on this project without a credible precedent. McDonald's (MCD 1.52%) provided a template for menu simplification when it tackled its own swelling product line in late 2014 and into 2015.  The Golden Arches was forced to act after its menu choices peaked at an eye-opening total of 145 items in 2013.

After steady bouts of reduction, with a focus on killing high-complexity, low-value items, McDonald's' menu list today stands at close to 100 products. By my count, roughly one-third of this number is comprised simply of fountain beverages and McCafe coffee and shake variants. McDonald's' menu rationalization undergirded the rest of its transformation and the turnaround the company's enjoyed to date. 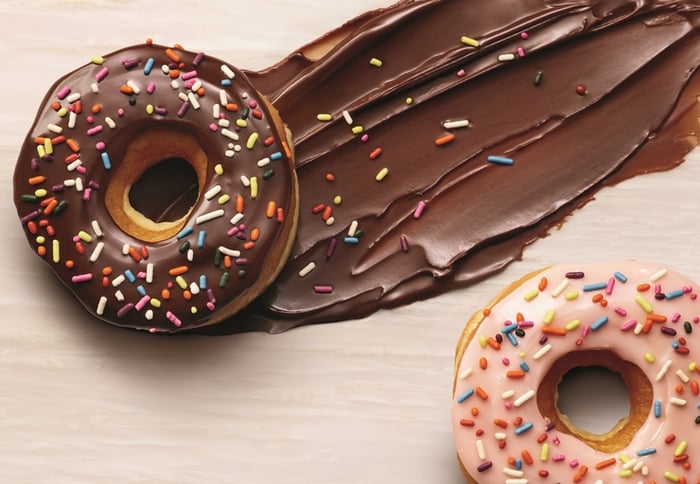 Advantages which extend beyond margins

Profitability isn't the only consideration behind Dunkin's' initiative. Perhaps counter-intuitively, a key benefit of a simplified menu is flexibility. When core offerings are right-sized, a company can move quickly on alternate products, in the form of more frequent limited time offerings (LTOs), or slight tweaks in value menu presentation. Reducing the base layer of difficulty in food preparation, while ramping up LTOs, makes it possible for customers to actually see more variety on the menu boards as time goes on.

A pared-down offering is also more suited to Dunkin's' current U.S. corporate strategy. Dunkin' Donuts is squarely focused on having consumers identify it as an "on-the-go" option. To cite just one example of this push, 87% of new Dunkin' Donuts stores opened in the most recent quarter featured a drive-through.

In fact, the company's next-generation model store, which was introduced during the first quarter in Quincy, Massachusetts, is the first fast-food restaurant to feature a drive-through lane dedicated solely to mobile ordering. So, faster serve times associated with a smaller core menu board should combine with other operational modifications, to fulfill managements' vision of Dunkin' as America's primary pit-stop during the day.

To me, this last point is the most cogent reason for shareholders to be patient while the company works through a quarter or two of lower comps due to its menu initiative. If you buy Dunkin's' brand positioning, you already understand that it's differentiating itself from rival Starbucks (SBUX -0.09%), which wants customers to perceive it as a "third place," i.e., a social destination outside home or work.

For every potential customer who wants to linger with a friend at Starbucks, there's another customer that has some place else to be, wants to simply grab a coffee and a snack, and stay in motion.

This is Dunkin's' target purchaser, and one that will respond to speed and clarity reinforced by a simpler menu. As Dunkin' U.S. president Hoffman colorfully and succinctly stated during the company's April earnings conference call, "[W]e're not going to out comfy-couch some of the other coffee house players. That's not our intent."