Please ensure Javascript is enabled for purposes of website accessibility
Log In Help Join The Motley Fool
Free Article Join Over 1 Million Premium Members And Get More In-Depth Stock Guidance and Research
By Scott Levine – May 31, 2018 at 7:46AM

This gold miner may be one to add to the shopping list.

It's time to grab the pickaxes and mine the market for the best gold opportunities. On today's docket is Goldcorp (GG). Besides four mineral-producing mines located in Canada and a joint venture in the Dominican Republic, the company's portfolio includes three assets in South America. Additionally, Goldcorp has several projects in the development phase.

Whereas gold-mining companies' stocks, generally, are highly correlated with the price of gold, you couldn't tell by examining Goldcorp's year-to-date performance. While the price of gold has stayed almost flat, shares of Goldcorp have soared more than 10%. Are shares too expensive to add to your portfolio right now? Let's dig in deeper and find out. 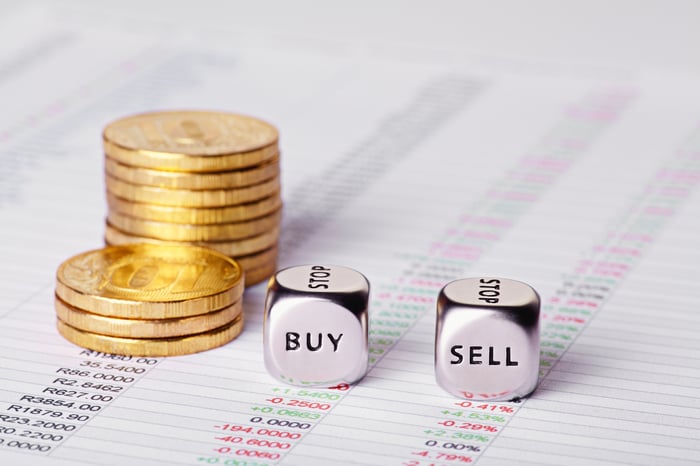 The crux of the bull case for Goldcorp pertains to the company's five-year growth plan, which management introduced in 2016. In addition to increasing both gold production and reserves 20% over the fiscal 2016 levels, the company aspires to reduce all-in sustaining costs (AISC) 20% from the fiscal 2016 amount.

Apparently, the company is on the right track. After a successful 2017 -- a year in which the company met its gold production, AISC, and exploration targets -- Goldcorp continued its momentum into 2018. Following the company's first quarter, management affirmed its guidance for 2018: gold production of 2.5 million ounces and AISC of $800 per gold ounce.

Goldcorp also has a plan to improve its margin by identifying $250 million in annual sustained efficiencies by 2018. Poised to achieve its goal in the coming months, management has suggested that it will raise its target, extending the program in the second half of 2018.

Looking further into the future, management expects continued growth. In an interview with Bloomberg, David Garofalo, Goldcorp's CEO, stated, "What we're trying to do is distinguish ourselves as the growth vehicle in a sector that's still shrinking."

In terms of its long-term outlook, Goldcorp has the advantageous position of having a strong pipeline of projects, suggesting that it won't be reliant on acquisitions to grow, unless a compelling opportunity presents itself.

A case for the average bear

The days ahead seem to be promising for Goldcorp. But an auspicious future is far from enough to justify an investment. Instead, investors would be better served by adopting a more circumspect approach when dealing with Goldcorp stock.

Over the past three years, gold-mining leaders like Barrick Gold and Newmont Mining have recognized greater gains than the price of gold, while Goldcorp and Yamana Gold have not only significantly lagged gold price gains but created outright losses for shareholders to boot. 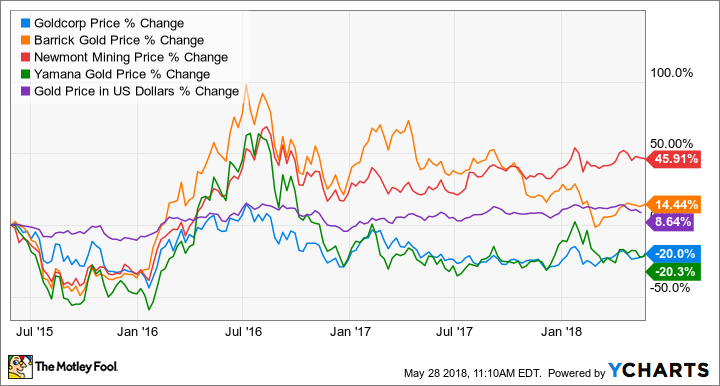 More important to recognize, perhaps, is how these stocks stack up against the S&P 500, which rose 28% over the same period: All but one of the companies underperformed.

But we're looking for exceptional long-term opportunities. Three years is a short of a time horizon, so let's peer farther back. Expanding the time horizon to 10 years, we find the contrast is even more striking. 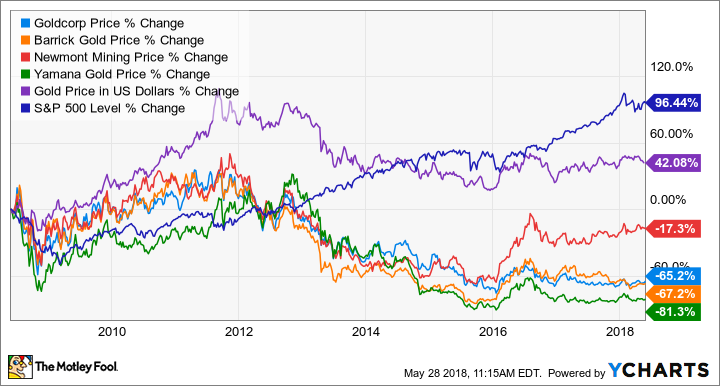 In addition to underperforming the S&P 500, each of the companies lagged the price of gold. Evidently, over the past 10 years, investors seeking gold exposure would have been better off with other gold-oriented opportunities.

By some accounts, Goldcorp appears to be a glittering opportunity. Others, however, may characterize it as nothing more than fool's gold. Let's consider the stock's valuation for some additional insight. 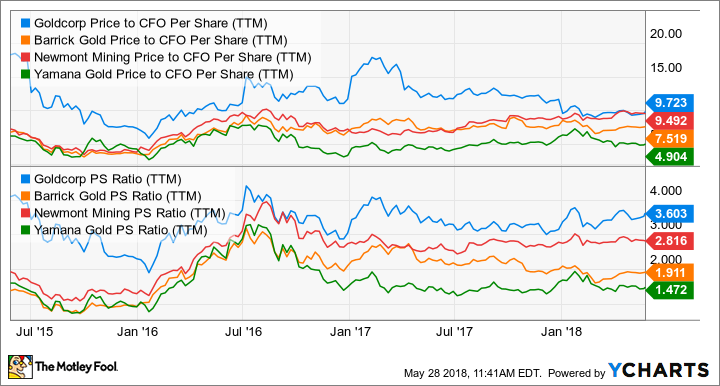 GG Price to CFO Per Share (TTM) data by YCharts.

Initially, the stock seems inexpensive, but when comparing it against its peers, we find that it consistently trades at a premium.

Apparently, there's no clear bargain to be had here.

Is it worth its weight in gold?

Considering both the short and long terms, it appears that a gilded future lies before Goldcorp. The stock's future, however, seems less attractive. For investors committed to the yellow metal, seeking to mitigate the risk of a sharp decline in the market, alternatives like a gold ETF or royalty and streaming company represent better opportunities.