Weight Watchers (NASDAQ:WW) isn't your mother's weight loss program anymore. Combining the latest knowledge on healthful eating into a program aimed at providing the flexibility and convenience desired by today's consumer, along with a modern, digital option for support, Weight Watchers has transformed itself from the days it simply had you counting calories.

Yet because it is still a program with a decidedly female clientele, it may be leaving a lot of money on the table. That may be changing, however. 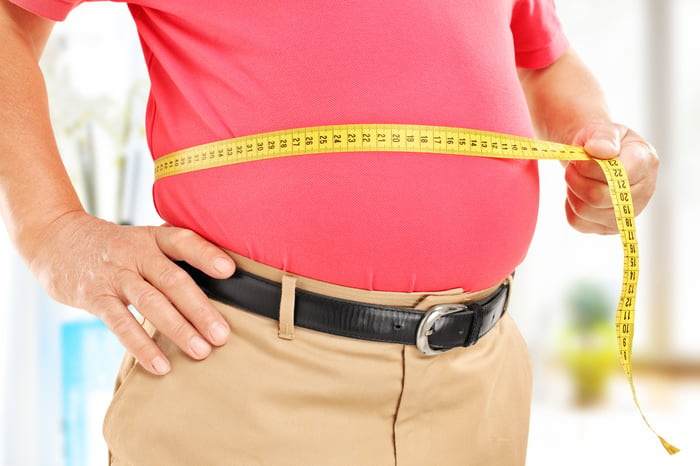 Men represent nearly half the population, but only about 15% of Weight Watchers' customers. Image source: Getty Images.

Although President and CEO Mindy Grossman said during the company's May 3 conference call with analysts that you won't see a specific Weight Watchers for men program, she also pointed out that "we can target the right influencers who are going to inspire other people."

Such inspiration is coming from the people Weight Watchers hires as ambassadors, and lately they've been men. It kicked off the year by hiring hip-hop impresario DJ Khaled as its "social media ambassador." Khaled will appeal to a demographic that might never have considered Weight Watchers before.

Independent market research firm Marketdata says 85% of Weight Watchers' current clients are women. There might be cultural reasons why men are less likely to sign up for a structured program, but the Kaiser Family Foundation says 71% of all U.S. men are overweight or obese versus 59% of women, so that's a lot of potential customers for Weight Watchers to go after.

Weight Watchers has also partnered with filmmaker and actor Kevin Smith. When he joined the program, Weight Watchers made him another of its ambassadors and he's also detailed his weight-loss journey on social media.

A healthy appetite for growth

The moves Weight Watchers has made, regardless of gender, are paying off. In the first quarter of 2018, Weight Watchers reported a record 4.6 million subscribers, up 29% from the year-ago period. Total paid weeks grew 27%, leading to a 24% increase in revenue, which hit $408 million.

Grossman also notes that client retention rates are climbing as well, and are now "well over nine months, also the highest level in our company history."

That's come about because Weight Watchers improved its original and popular SmartPoints program by creating one that was even more flexible, adding some 200 foods to a list that users didn't need to track.

Called WW Freestyle, the program lists foods such as eggs, corn, fish, and beans as now carrying zero points, whereas before they had anywhere from two to four points per serving. The rationale is that these are healthier options than some other foods, and people will be better off choosing them and will be more apt to choose them as they have no points value in the program. A member's target number of points per day is based on things such as their size and activity level.

However, this isn't the first time Weight Watchers has tried appealing to men, as it hired NBA star Charles Barkley as its first male spokesperson a few years ago, though now it seems to be making a more concerted effort to reach out to them.

The U.S. weight-loss market is a $66 billion industry with commercial programs like Weight Watchers and NutriSystem accounting for about $2.8 billion of the total. Weight Watchers, though, sees that it can sell more, not necessarily by further rejiggering its menus, but in broadening the appeal of its lifestyle message.

Bringing in more men would help it achieve its ambitious three-year plan laid out earlier this year to help 10 million people "adopt healthy habits" while growing revenue to $2 billion by 2020 yet also increasing profits at a faster rate than revenue.

Having men represent half of Weight Watchers' customer base is something that may not be attainable, but going after that demographic just might allow it to accomplish those goals and help its stock continue on its growth trajectory.

Is This How Weight Watchers Achieves Its Next Growth Spurt? @themotleyfool #stocks $WW Next Article
Current