It's easy to get addicted to the dopamine rush after buying a new stock and following its every move. In the desire to find The Next Big Thing, many of us -- including myself -- scour sites like fool.com for ideas.

In the process, new and old investors alike are drawn in by "story stocks": companies that are smaller, more speculative, and have lots of media hype. Articles on such stocks often -- though certainly not always -- lay out exactly how the future for the company will unfold. Writing about story stocks is fun; it generates attractive headlines and grabs lots of eyeballs.

Unfortunately, this is one of the biggest -- and for finance journalists like myself, irresponsible -- mistakes we can make. I'll get to why that's the case below. 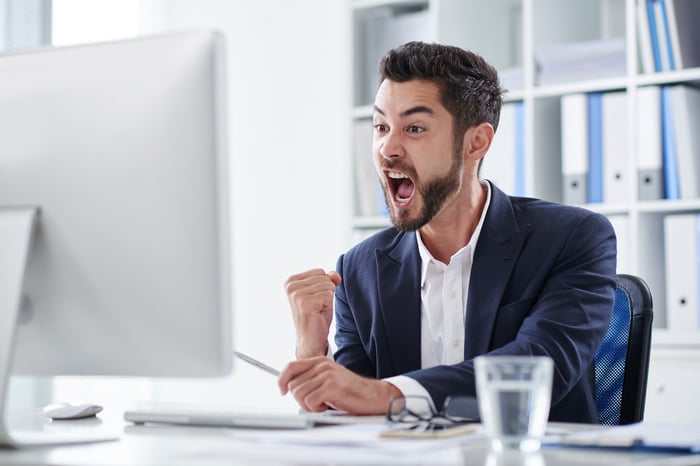 It's easy to get addicted. Image source: Getty Images.

But first, an example from outside investing

In 2011, Ken Murray, a professor of family medicine at USC, wrote an essay: How Doctors Die. Benefiting from years of research and experience in the medical field, Murray wrote that many doctors choose a path toward death that few non-doctors do.

And it's exactly the opposite of what you might expect:

What's unusual about them is not how much treatment they get compared to most Americans, but how little. For all the time they spend fending off the deaths of others, they tend to be fairly serene when faced with death themselves.

The essay goes on to say that doctors have a sober view of what "futile care" -- the kind that can keep you surviving, but prevent you from thriving -- looks like. They choose to end their lives on their own terms.

This sets up a troubling juxstaposition, where the professionals aren't heeding the same advice that they're getting paid to give and a critical data point too important to ignore.

Applying "skin in the game" to investing

Best-selling author, former trader, and NYU professor Nassim Nicholas Taleb has written an entire book -- Skin in the Game -- on this phenomenon. He says that we should stop worrying about the "rationality" behind an expert's opinion (like a doctor), and replace it with a simple question: "What have you done/would you do if you were in my shoes?"

In the investing world, this is the same as saying to a finance journalist: "I'll listen to your reasoning, but you also need to tell me what's in your portfolio."

Motley Fool co-founder and Chief Rule Breaker David Gardner is just as passionate about accountability in the financial-advice realm. In a series of 2011 essays titled Moneyballing the Financial World (part 1, part 2, part 3), he laid why accountability is so important.

If no one is taking the time to hold people accountable for their...predictions ... the system doesn't improve. The audience doesn't get smarter and more discriminating, this weak demand fails to create a better supply of information, and media channels lack any incentive to provide quality information and predictions.

Proof: I'm terrible when my skin isn't in the game!

No two thinkers have had a greater influence on my own writing and investing than Gardner and Taleb -- and I wanted to check back and see how this idea of skin in the game and accountability applied to my own record. (Spoiler alert: it ain't pretty.)

I've been writing for the Motley Fool since 2010. I went back and looked at every stock I've wrote positively on in an article that's at least five years old, and compared the five-year returns -- relative to the S&P 500 -- of the suggestions I made while actually owning the stock (skin in the game), to those where I didn't (no skin in the game).

The results were astounding. The most obvious conclusion -- at least during the first four years that I was writing for the Fool: I'm not a very good stock picker. Of the 395 different times that I discussed buying a stock, my view outperformed the S&P 500 just 45% of the time.

But when we separated out the picks where I had skin in the game by owning the stock (303 total stock suggestions) versus the ones where I didn't (92 total), a statistically significant difference arose.

Here's what the distribution of returns looked like when I owned the stock I was bullish on. 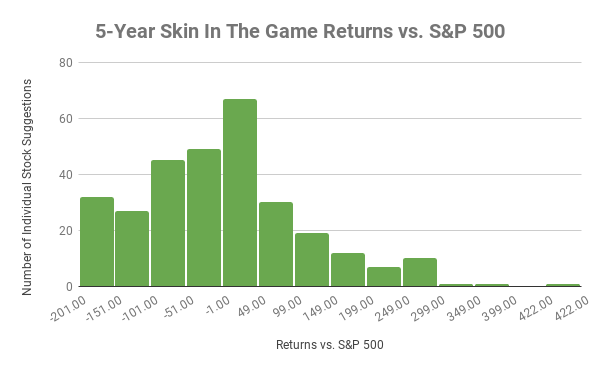 Data source: YCharts, company websites. Chart by author. If a company was acquired, merged, or declared bankruptcy, returns taken relative to market until that event occurred.

And when we evaluate the stock where I did not have any skin in the game, the distribution looks like this. 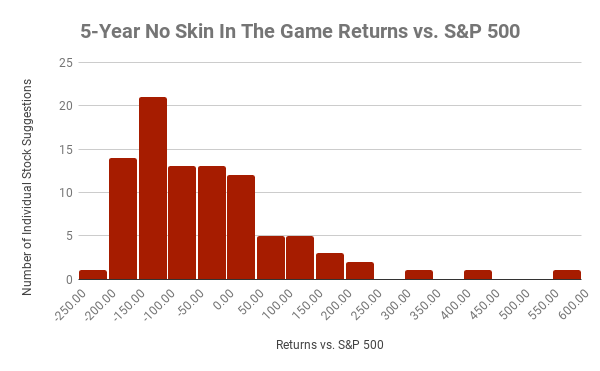 Data source: YCharts, company websites. Chart by author. If a company was acquired, merged, or declared bankruptcy, returns taken relative to market until that event occurred.

One point worth pointing out:

This is both humbling and astounding. Between October 2010 and May 2013, the 303 times I positively discussed stocks with skin in the game performed about as well as the S&P 500. Technically, you would have been better off buying an index fund.

But over that same time frame, the 92 suggestions I made without any skin in the game underperformed by an average of 33 percentage points -- a statistically significant difference. You would have been better off asking your five-year old nephew where to invest than listening to me.

A quick aside: There are certainly people out there on the internet who try to move stocks in "pump and dump" schemes. Here at The Motley Fool, we have minimum market cap guidelines here to steer us well clear of even the appearance of potentially moving the market. (That's one of the many reasons we don't cover microcaps and penny stocks -- they're also usually terrible businesses.) Of course, the underperformance of my "no-skin-in-the-game" company views should have already told you that my ability to create sentiment is pretty minimal.

Lessons I've had to learn...again and again until I "get it"

I have no idea if these same trends apply across all writers at The Motley Fool, or other financial websites. Having said that, here are the themes I noticed arising time and time again as I read back over these articles:

I have little doubt that the no-skin-in-the-game articles were able to get higher readership due to this trend, and that created positive feedback for me. As I've learned, however, that doesn't mean I was -- in any way -- helping the world to invest better.

Second, the no-skin-in-the-game articles often would only mention a stock once or twice, though 3D Systems was named six times. By and large, these suggestions were new and exciting. The skin-in-the-game articles often repeated the same companies again and again. In fact, those five stocks mentioned two paragraphs above were called out 123 times -- over 40% of all the suggestions I made with skin in the game.

Some might say that means I was lazy. Perhaps, but who cares? I would counter that by saying I was simply following one of the most important dictums of famed investor Peter Lynch: Sometimes, the best stock to buy is the one you already own.

Those 123 suggestions outperformed the S&P 500 79% of the time -- an incredibly high accuracy rate. And the average pick outperformed the stock market by 64 percentage points over a five-year period -- again a very high mark.

And perhaps that's the biggest lesson I've learned. In the past, when I didn't own a stock, the primary value in writing about it was that it was new and exciting and piqued my curiosity. There was upside, but -- because I couldn't personally lose any money -- no downside.

As soon as I bought a stock myself, however, I was exposed to both upside and downside risk. My picks were far more repetitive and boring. But, after all, that's what great investing normally looks like. As former Fool Morgan Housel once put it: 99% of investing is doing nothing (which is boring and seems lazy), the other 1% will change your life (with market-beating returns).

Does this mean that you should ignore what I -- or any other finance writer at The Motley Fool or other site -- have to say if we don't own a stock?

First of all, I only analyzed articles where I was writing very positively about a company. The majority of articles present you with financial news, analyzing what a company's earnings report means, for instance, without giving a hard buy/sell call.

Second, whether or not a writer owns a stock is "a" data point, not "the" data point. Sometimes, life prevents us from investing as much money as we'd like -- we have growing families, medical emergencies, and unexpected expenses that affect our ability to invest -- but don't stop us from being curious and researching stocks.

Finally, thanks to David Gardner, we have an aforementioned tool that can allow you to track how any Motley Fool writer has performed over time: CAPS scores. If you want to check, click on the author's handle.

That will take you to the author's profile page. From there, you will be able to view his/her overall score, as well as clicking to get greater detail on individual stock picks. 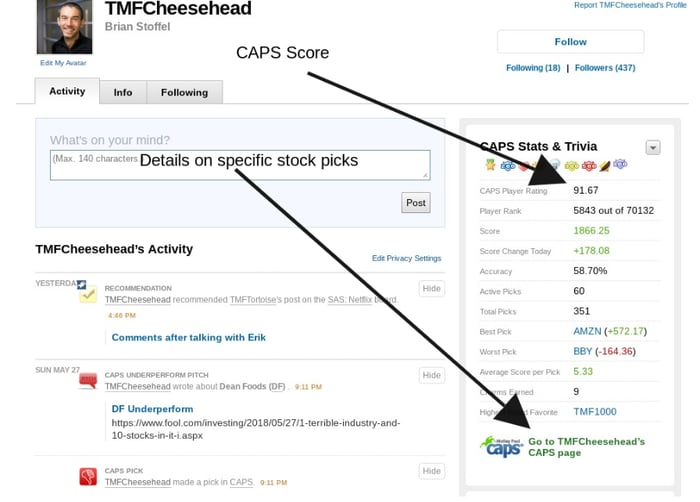 Image source: The Motley Fool. Arrows and some text added by author.

Us writers at The Motley Fool are held accountable by our editors to track strong in-article viewpoints within our CAPS profile. Even if we can't put money in the game, our public scorecard is at least putting an important measure of skin in the game.

To conclude, I'll echo what David Gardner said in his 2011 essay:

I am formally asking you as a reader, if you care and if you want to see a "better, smarter, truer, and richer world of tomorrow" please ask, "What's his record?" anytime you are face-to-face with a source of financial advice. "Source" here and throughout this article series is meant broadly. Might be a CNBC show. Might be your broker. Might be a Motley Fool writer.

At least until May 2013, my own readers could have benefited from heeding this advice.