In late 2015, Hewlett-Packard split into two distinct companies: HP Inc. (NYSE:HPQ) and Hewlett-Packard Enterprise Co. (NYSE:HPE). Those who advocated for the split can take a bow as, since the break-up, both companies have been allowed to focus on their respective expertise and have handily outperformed the S&P 500 index. HP Inc's performance has been especially surprising, as this was supposed to be the company that was focused on a staid printing market and a declining personal computer (PC) environment. Yet its shares have not only outgained the market, but its underlying business continues to grow as it gains market share and shows profitable growth.

In the second quarter, the company's growth continued, as net revenue grew to $14 billion, a 13% increase year over year, and adjusted earnings per share (EPS) rose to $0.48, an even better 20% increase year over year. HP's growth was fueled by gains in each of its two major divisions: Sersonal Systems, which focuses on the consumer and commercial markets in PCs, laptops, notebooks, and tablets, and printing, which provides consumer and commercial printing hardware and supplies.

Does this performance justify an investment in HP after its recent gains and run-up in price? Let's take a closer look at what the company said it is doing in its second-quarter conference call in each of these two areas to drive its surprising success and see if we can determine whether HP still deserves consideration for a place in your portfolio. 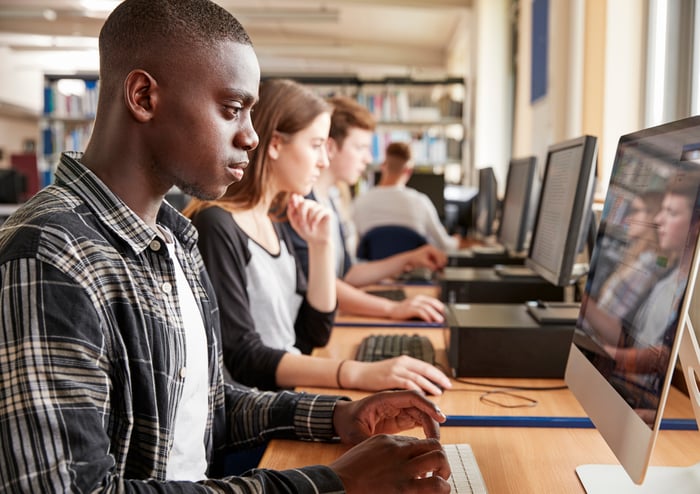 To butcher a favorite Mark Twain saying, the reports of the PC market's death may have been greatly exaggerated. While it is undoubtedly no longer the source of great growth, HP has found ways to consistently grow sales in its computer hardware division, and to do so by double-digit percentages. In the second quarter, Personal Systems' net revenue increased by 14% year over year with an operating margin of 3.8%. While this division brings in about 62% of the company's revenue, the low operating margin causes it to bring far less earnings than the Printing division.

Two initiatives stand out in the Personal Systems department and deserve credit for driving this growth. The first is HP's Device-as-a-Service (DaaS) plan. HP's DaaS plan is a platform geared toward businesses that allows them to outsource traditional IT support services to HP. For a transparent price per device, HP handles tasks for the entire life cycle of its computer hardware, from the design and deployment of an IT environment planned for businesses' needs to disposing and replacing hardware at the end of its usefulness. In the meantime, HP provides the businesses with help-desk services, onsite support, and accidental damage protection. In the conference call, CEO Dion Weisler said DaaS revenue saw "strong double-digit growth."

The other way HP is driving profitable growth in its Personal Systems division, according to Weisler, is by "aggressively pursuing targeted opportunities." For example, Weisler described how the company went after the healthcare market:

One example is healthcare where safety, security and regulatory compliance are critical. We recently introduced a portfolio of products purpose-built for healthcare providers by optimizing clinical workflows with RFID readers and improving collaboration capability for telemedicine ... We are deeply committed to listening to our partners, understanding their customers' needs and delivering innovation that drives growth.

A blueprint for success

HP management said there are two trends really beginning to take shape within the printing industry which they believe will benefit the company. The first trend is that in a flat industry there probably isn't enough room for as many players (management identified 14) as currently exist. Weisler believes the industry will naturally consolidate, in part through acquisition, over time. For instance, Weisler highlighted HP's acquisition of Samsung's (NASDAQOTH: SSNLF) printing business last year for $1.05 billion as a particularly savvy move, one that did far more than just capture additional market share for HP. The deal also gave HP access to Samsung's 6,500 printing patents and a pool of about 1,300 expert engineers.

The second trend management is seeing in the industry is that sales are going from transactional to contractual, meaning customers want more than just printers -- they want print service. Weisler said HP had "mastered the art" of how to handle managed print services for customers, however, and this was just part of a larger trend toward services, the same trend that HP's DaaS platform caters to. He continued, "[I]ncreasingly, customers are looking to ... have everything both at Print and Personal Systems, at Workstations and even 3D Printing in the future as a service. So we remain focused on that."

A compelling value, and a buy

Given the company's trailing-12-month adjusted EPS of $1.83, HP currently sports a P/E ratio of just 12. In today's frothy marketplace, that's a screaming value! Based on the midpoint of the company's 2018 EPS guidance of $2, shares are selling at a forward P/E ratio of just 11. Better yet, the company pays a nice dividend yield of 2.5% with a payout ratio of only 30%, meaning there's still plenty of room for dividend growth in the future. In my book, HP's innovative ways to drive double-digit sales growth in flat markets and its attractive valuation makes it a compelling buy. I recently added shares to my own portfolio and gave it a big green thumbs up on my CAPS page.