Facebook (NASDAQ:FB) has faced a lot of backlash this year from both users and advertisers over its lapses in data protection. And that backlash is wholly justified, following the revelation of management's mishandling of data shared with and used by Cambridge Analytica to target political advertisements on Facebook without users' authorization.

Some big advertisers halted their ad campaigns on the platform earlier this year, but that doesn't seem to have slowed down Facebook's growth. The company posted year-over-year ad revenue growth of 50% in the first quarter, and analysts don't expect much of a slowdown in the second quarter.

It turns out smaller advertisers have played a big part in supporting Facebook's continued growth. And that's a huge advantage for Facebook over smaller rivals Snap (NYSE:SNAP) and Twitter (NYSE:TWTR), both of which still derive the majority of their ad revenue from big companies. 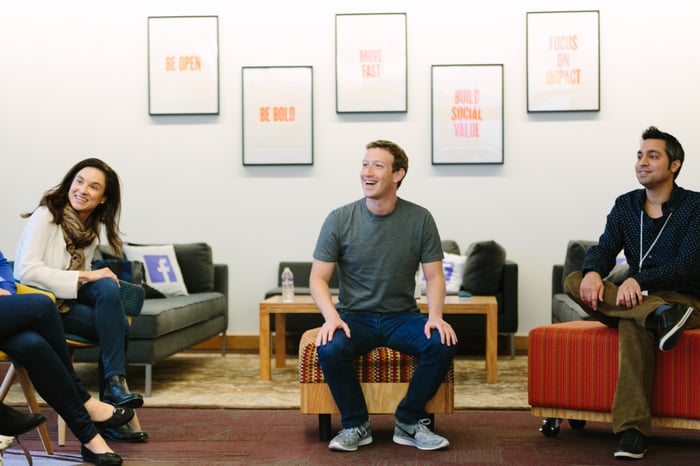 Facebook has over 6 million active advertisers on its platform. The vast majority of those advertisers fall into the small and medium-sized business category. Ad spending from those small businesses is more than making up for any declines from big brand advertisers on Facebook during the first half of the year, according to Magna Global's Vincent Letang.

While big brand advertisers can get a lot out of platforms like Snap and Twitter, smaller advertisers are better served by Facebook. Small businesses rely more heavily on specific ad targeting in order to maximize their limited ad budgets. Twitter and Snap simply can't offer targeting at the same level of precision as Facebook.

The two smaller competitors also don't offer the same level of reach. Reach is important to big advertisers because they want to get their message to as many people as possible. But it's also important to small advertisers: If a small business spent time crafting an ad for Snapchat or Twitter, only to find that just a small fraction of its target market was actually engaged on the platform, that would be a big waste of its limited resources.

Facebook still offers the easiest way for small businesses to get in front of their target audience in the most cost-efficient way possible. That's why we've seen them continue flocking to the platform. Not only does Facebook have 6 million active advertisers, it also has over 80 million Facebook Pages for small businesses. So there's still a ton of room for Facebook to keep growing its advertiser base.

Facebook still faces the risk that its users will abandon the platform or spend less time on it. It experienced such a scenario in the fourth quarter in the U.S. and Canada, after making some changes to its News Feed.

If small businesses can't target advertisements as well, or reach as wide an audience as they used to, the value of ads on Facebook will decline. Then advertisers won't be willing to pay as much per impression as before, which could negatively impact the company.

But despite significant backlash and the #deletefacebook movement, not much has changed. Facebook is deeply entrenched in people's lives, and it's very difficult to give up entirely. What's more, as long as Facebook is able to continue adding new advertisers to its platform, it ought to see demand continue to propel ad prices higher for the foreseeable future.

Investors should certainly pay attention to any impact on user growth when Facebook reports its second-quarter earnings call, but look for commentary on active advertisers and Facebook Pages as well. As the latter metrics grow, Facebook's ability to weather bad news will increase.