Every investor hopes to find the next market-crushing monster stock. These come in different shapes and sizes, ranging from high-octane growth sprinters to deep-discount value plays and unstoppable long-term cash machines. What they have in common is the potential to make their investors a lot of money -- either quickly or over the long haul.

There's no surefire way to find and exploit the best value-generators, or else everyone would be buying them. That being said, these two household names hold a lot of potential shareholder value -- for subtly different reasons.

It's not a comeback -- Big Blue has been here for years

When Ginni Rometty took the CEO reins from predecessor Sam Palmisano in 2012, she immediately started to swivel the tech giant in a new direction.

Palmisano built IBM into a powerful one-stop shop for enterprise computing needs. From server and networking hardware to data analysis tools and consulting services, IBM had it all. Big Blue was the envy of the industry, inspiring many competitors to try building a similar business model.

But Rometty and her board of directors saw a new era coming, where low-margin hardware sales would be far less important to IBM's financial health than forward-thinking growth initiatives. She has sold off many of IBM's worst-performing business units, shaving 26% off IBM's annual sales in six years. Investors hated that top-line sacrifice, so IBM's stock price fell 24% lower over the same period while the S&P 500 market barometer more than doubled.

IBM's cash-generating motor never stopped running, of course. And it looks like Big Blue has finally bounced off the bottom of that long, deep business trough. The so-called "strategic imperatives" that will drive IBM for many years to come now account for nearly half of IBM's total sales, and this revenue is growing at a brisk 16% annual clip. They will soon cease to be an ambition and become IBM's core operations, built around next-generation technologies like artificial intelligence, cloud computing, big-data analysis, and the Internet of Things. IBM is even at the forefront of applying blockchain technologies to common business problems.

What IBM is doing here is actually quite extraordinary. The company shrugged off an industry-leading strategy despite loud and persistent investor protests, then built a viable growth business for the next couple of decades out of up-and-coming market trends. That's how you stay in business for more than a century, and IBM shareholders should reap the rewards of that flexibility for a very long time. Starting from a deep-discount valuation, where IBM shares can be had for just 9.7 times its annual free cash flows, it's not hard to get excited about "boring" old Big Blue today. 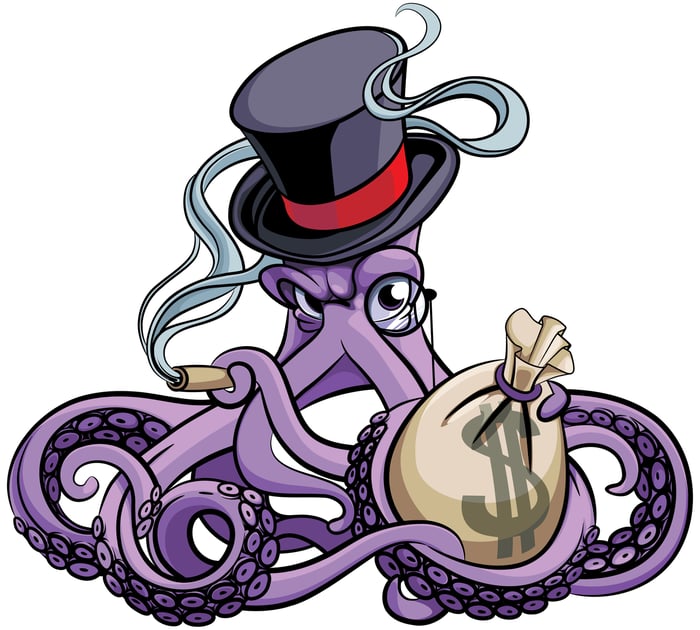 Rumors of Disney's death have been greatly exaggerated

Disney investors enjoyed a fantastic four-year span from the start of 2012 to the end of 2015. Annual sales surged 32% higher, free cash flows rose by 66%, and share prices nearly tripled. The Marvel Universe was humming on every available cylinder, Disney bought Lucasfilm near the start of that golden age, and let's not forget about the Frozen phenomenon.

That was the end of the joyride, though.

Since early 2016, Disney's trailing revenue increased by a modest 5%, but cash flows skyrocketed 46% higher. Marvel and the Star Wars franchise continued to pump out record-breaking movies, the Disney cruise line is adding three more ships between 2021 and 2023, and the company is breaking away from a long-standing Netflix (NASDAQ:NFLX) partnership to nurture its own digital video efforts.

Disney's future looks as strong as ever, apart from some challenges in its broadcast and cable TV operations. I'd be shocked if the new streaming video platforms don't mitigate that weakness in relatively short order. On top of that, Disney is attempting to expand its content library and collection of distribution platforms even further by buying out Hollywood rival Twenty-First Century Fox (NASDAQ:FOX) (NASDAQ:FOXA).

The Fox acquisition would be great for Disney and its investors in the long run, with advantages on both the content production side and in the evolving field of streaming media platforms. But even if the buyout falls through, Disney will remain a media powerhouse with market-leading brands and a unique knack for turning intellectual property into cold, hard cash.

And either way, the stock is wildly undervalued today. The stock missed out on a 33% market rally since early 2016, trading nearly exactly sideways instead. Shares are now trading at just 16 times trailing earnings and 14 times free cash flows.

It's a fantastic stock for the long run, just like IBM, and both of them are selling at a major discount to their true long-term value. IBM's market pain stems from an audacious strategy shift, while Disney's discounts are more of a myopic market focus on the cord-cutting issue.

These monsters will only become more monstrous from here.