Illegal imports and dumping have hurt the domestic steel industry really hard over the years, leaving Nucor (NYSE:NUE) and peers with no option but to cut costs to maintain margins in the face of intense competition. Not surprisingly, President Donald Trump's tariffs on steel have been welcomed by the industry. As Nucor CEO John Ferriola said during the company's last earnings conference call:

Our ability to create value for our customers increases when we are able to compete on a level playing field. For that reason, Nucor applauds the ongoing work of the U.S. government to address the massive volume of dumped and illegally subsidized steel products that have been flooding into our country at historic levels.

With the steel industry gathering steam and Nucor in a stronger position than ever, you'll want to pay attention to this steel stock.

A couple of weeks ago, Nucor released hugely encouraging preliminary numbers for its second quarter. Nucor expects to double its Q2 earnings, both on a year-over-year and sequential basis, to $2.05-$2.10 per share. Recent tax and regulatory reforms and stabilizing oil prices have been a boon amid an already strong end market. 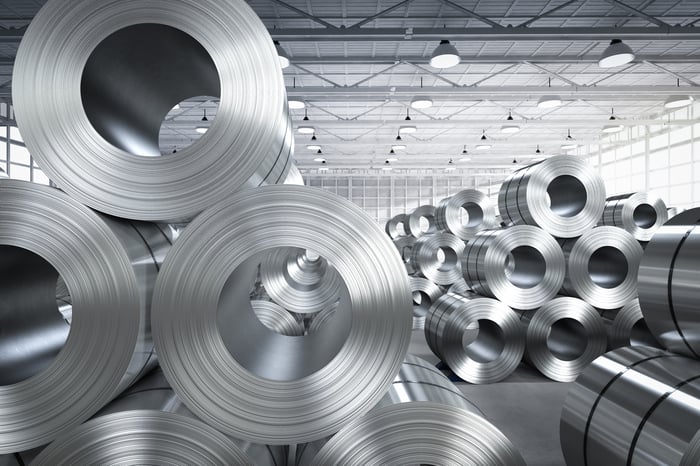 In Q1, Nucor's average sales prices improved 9% year over year and 3% sequentially, driving its revenue 9% higher. Going by that trend, I expect Nucor to report significantly higher prices for Q2 as it passes on the rising input costs to customers, which should reflect in its top-line growth. Analysts project Nucor's sales to climb nearly 24% in Q2.

Of course, I wouldn't recommend buying a stock based on its expected upcoming earnings, but Nucor's recent operational performances backed by a broad-based market recovery and ongoing growth initiatives suggest this stock has a long way to go.

To begin with, during its last earnings call, Nucor's management revealed how 21 of the 24 end-use markets that the company serves are experiencing "stable to improving demand."

That's not all. Nucor also highlighted how demand from its most important markets, including construction, heavy equipment, and energy are particularly strong right now. There's evidence to back Nucor's optimism. Caterpillar (NYSE:CAT), the world's largest construction and mining-equipment manufacturer, reported a sharp 31% jump in revenue for its first quarter. More importantly, Caterpillar is so confident about the resilience of the ongoing strength in the U.S. infrastructure, construction, and oil and gas sectors and an uptick in mining spending that it even upgraded its full-year profit outlook.

As much as the pent-up demand for steel from nearly every key market is great news for Nucor, what matters most is that Nucor is already among the lowest-cost producers in the industry, so any growth in revenue going forward should flow directly to its bottom line and lift its margins higher. 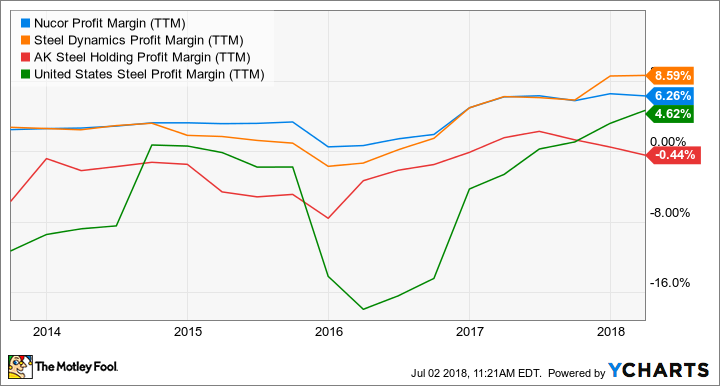 Nucor's strength lies in its operating model: Unlike United States Steel Company (NYSE:X) and AK Steel Holding (NYSE:AKS) that use the traditional capital- and labor-intensive blast furnaces method to manufacture steel, Nucor relies on the smaller and more flexible electric-arc furnaces and mini-mills that process scrap to produce steel. At the same time, Nucor is benefiting from some really smart recent investments.

Nucor is betting big on growth

One of Nucor's recent growth moves that stand out is its investments in tubular products in the past couple of years or so, which has not only added a high-margin product line to the company's portfolio but also provided its steel sheet mills with an internal customer. The company expects sheet shipments to this internal "value-added channel" to grow nearly 40% in 2018.

Then there are all other projects that Nucor is pumping money into: It plans to spend around $1 billion in fiscal 2018, with the bulk of its going toward expansionary projects. That may dent Nucor's cash flows this year, but there's nothing to complain about as most projects, including three in its sheet mills business with combined annual capacity of nearly 1.4 million tons, are expected to come on line next year. Management is confident that these investments will help it make the most of an industry upturn.

After delivering its most profitable year since the Great Recession in 2017, Nucor is well on its way to yet another solid year. And if tariffs play out the way Trump wants them to, Nucor's industry leadership, low-cost advantage, and investments in growth projects could send its sales and profits zooming. Not to forget the solid dividend growth potential that the stock offers: Nucor is among those rare cyclical companies to have become a Dividend Aristocrat with an incredible 45-year dividend increase streak. No matter which way you look at it, Nucor remains a great stock to own in any portfolio, even at current prices.