While Tesla (NASDAQ:TSLA) has been working on a deal to build electric cars in China, a key Chinese maker of electric-car batteries has announced plans to build a battery factory in Germany. And at least one German automaker has already signed up to buy the factory's products.

Chinese battery maker Contemporary Amperex Technology Ltd., better known as CATL, announced that it will build a factory in Germany to manufacture batteries for electric vehicles. The news follows a related announcement: BMW AG (OTC:BAMXF) has signed a major contract to buy batteries from CATL over the next few years.

It's expected that a significant portion of those batteries for BMW will come from this new German factory. Here's what we know. 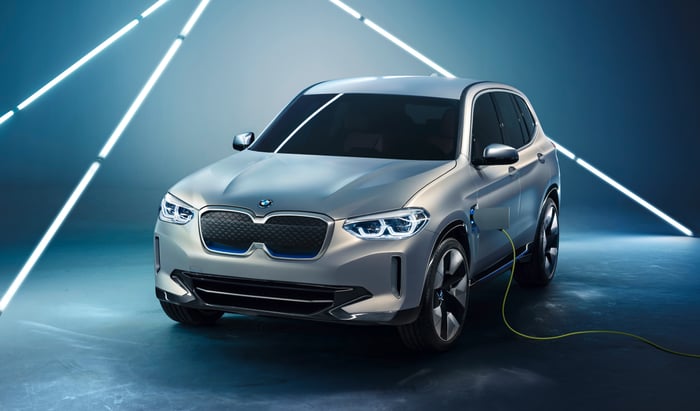 BMW will begin building a battery-electric SUV called the iX3 in 2020. It appears that CATL will supply the cells for its battery packs. Image source: BMW AG.

About CATL's plan to build a German factory

The deal, signed on Monday by Chinese Premier Li Keqiang and officials in the German state of Thuringia, commits CATL to building a battery factory that will ramp up to annual capacity of 14 gigawatt-hours (GWh) by 2022. The factory will be in Erfurt, Thuringia's capital city.

CATL's factory will be built in stages, with capacity increasing with each stage. CATL will spend about $280 million to build the first stage. Once complete, the factory will employ about 600 workers.

CATL chairman Robin Zeng told Reuters that the company hopes to eventually supply batteries to all of Europe's automakers. He said that if this first factory in Thuringia is successful, the company will consider building more battery factories in Europe.

Many of the new factory's batteries will go to BMW

In a separate deal, disclosed this week, BMW has agreed to buy 4 billion euros (about $4.7 billion) of battery cells from CATL. About 1.5 billion euros' worth of those will come from the new factory in Erfurt once it's up and running; the remainder will come from existing CATL factories in China.

BMW lags its major rivals somewhat on bringing battery-electric technology to its mainstream vehicles. The company plans to launch a battery-electric version of its small Mini Cooper next year, followed by an all-electric variant of its big-selling X3 SUV in 2020. A big sedan intended as a technological showcase will follow in about 2021; BMW executives refer to that vehicle as the iNEXT.

BMW joins rival Volkswagen AG (OTC:VWAGY) as a CATL customer. VW, which is expected to launch several battery-electric vehicles over the next couple of years, has signed battery contracts worth about $25 billion in total with CATL and two of its Korean rivals, LG Chem and Samsung SDI. Another BMW rival, Mercedes-Benz parent Daimler AG, said that it is in talks with CATL about buying batteries from the Erfurt plant.

The upshot: It's not a Gigafactory (yet), but it's important

This new CATL factory won't be nearly that big, but it doesn't yet need to be. It'll be a few years before the German automakers' output of long-range battery-electric vehicles matches Tesla's. If this new German factory stays busy, it's a safe bet that CATL will move aggressively to build more factories in Europe.

For CATL, this factory is a good and necessary move. It's now well positioned to win business from VW, BMW, and Daimler over the long haul, and not just in Europe: All three automakers build vehicles in China, as well.

CATL, which just went public last month and is only traded on the Shenzhen exchange right now, isn’t a huge company yet. But investors interested in profiting from the anticipated mass adoption of electric vehicles would do well to take a closer look at its stock.