Even though volatility has made a strong comeback in the stock market this year, the overall returns of the S&P 500 have been par for the course: 4.8% -- including dividends -- as of this writing. That's slightly ahead of the historical norm for six months, but nothing to write home about.

A group of growth stocks, however, have far surpassed those returns, averaging more than a double in six months. How have these stocks pulled off the feat, and which have risen the most? 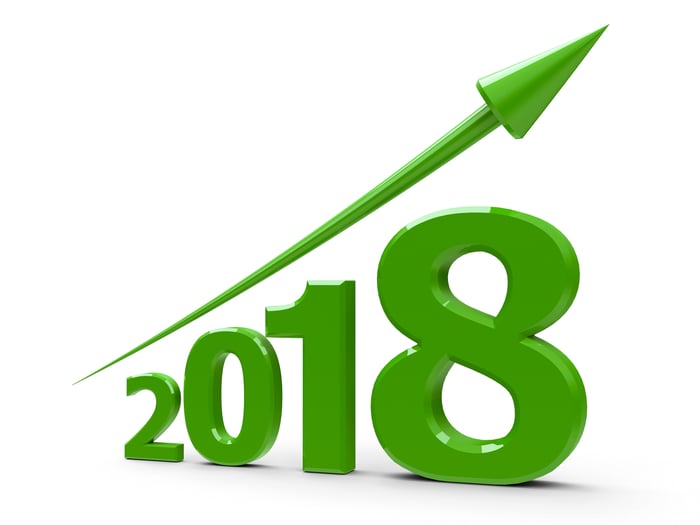 Before diving into the numbers, a quick word about the stocks included in this article. All of the companies needed to have a market capitalization of at least $1 billion at the start of the year -- this eliminates micro-cap stocks that experienced huge swings and are difficult to safely invest in due to little trading liquidity. All five have also averaged sales growth of at least 15% per year over the past few years. This helps differentiate "value" stocks that were attractively priced from true "growth" stocks.

Who says that a small e-commerce start-up can't challenge the entrenched industry heavyweights? While Etsy (NASDAQ:ETSY) stock had a ton of trouble out of the gate -- it lost almost 70% of its value in its first year as a publicly traded company -- it has since impressed the markets with its staying power.

The company brought in a new executive team after the poor post-IPO showing, and things have been encouraging ever since. By growing gross merchandise sold, focusing the company's scope, and trimming the payrolls, the company has produced results far ahead of what most analysts have expected.

The stock's biggest pop came just last month, when Etsy posted solid revenue growth and announced a new premium tier of subscription membership and -- most importantly -- an increase in fees for items sold on the platform.

The company has been able to accomplish this even with heavy turnover in it's base of sellers. Over the last three years, active sellers increased 40%, but there's heavy churn: only 32% of active sellers from 2014 were still active at the end of last year.

The real growth hook has been the Seller Services division -- which is where investors should train their attention. This helps vendors manage payments, promote their listings, print shipping labels, and design their websites. Revenue from the program is booming -- up over 200% in the past three years, it accounted for 59% of revenue at the end of 2017.

In January, founder and CEO Reed Hastings announced huge subscriber gains. Domestic subscribers jumped 11% year over year to 55 million, while international subscriptions were even more impressive: up 42% to 63 million. The key was that this growth came on the heels of an increase in the subscription price -- showing that people are willing to pay incrementally more for Netflix and its original content.

The company followed that report up in late April with another quarter of impressive subscriber gains. That combined with continued increases in monthly fees for a 43% jump in revenue for the quarter. That type of strength -- coupled with the company's commitment to drawing customers into the ecosystem with original content -- led Wall Street to continue bidding shares up.

It should be no surprise to see a medical-device company in the mix. Such companies can often get a huge boost in a short time from increased adoption of a new product. In Abiomed's (NASDAQ:ABMD) case, the jump is even more impressive because the company isn't some small start-up: It's worth over $15 billion and has been making implantable heart pumps for over 20 years.

The stock had been on a steady climb throughout the year but got its biggest boost in May, when the company announced revenue from its Impella heart pumps jumped 42% during the quarter. The pumps help support patients undergoing procedures that might otherwise not be possible because of heart conditions.

Because of the popularity of these pumps with hospitals throughout the world, Abiomed's free cash flow has jumped 260% over the past three years to $137 million.

After years of no real sales to speak of, Sarepta Therapeutics (NASDAQ:SRPT) has seen sales skyrocket. That has been almost solely due to the success of RNA-targeted Duchenne muscular dystrophy (DMD) thearpy.

But that doesn't actually account for all of the gains in Sarepta's stock. The lift has come from exciting news from the company's gene-editing therapies under development. In late June, the stock jumped over 65% in a single day after Sarepta announced positive results from an experimental gene therapy to treat DMD.

But investors need to keep a close eye on the exact data coming from these gene therapies. As fellow Fool Todd Campbell highlights, Sarepta's exciting data came from a pool of just three patients. That pool of trial participants will soon grow to 12 individuals. If Sarepta's DMD gene-editing therapy can perform just as well, it would be a huge boon -- as there are few treatments on the market for DMD.

Investors need to realize, as with all early stage drug companies, that the stock can be extremely volatile. While positive results have create huge pops, if the next trial doesn't produce the same type of excitement, the stock could quickly crater.

Finally, we have Axon Enterprise (NASDAQ:AAXN) -- the company formerly known as TASER International. While it still manufactures -- and has experienced significant contributions from -- its stun guns, it has turned its focus to body cameras. Specifically, the Evidence.com platform for storing and analyzing body camera footage has proven to be a sticky source of reliable revenue.

Early in the year, founder and CEO Rick Smith announced that he would be forgoing an annual salary in favor of an Elon Musk-like package -- he'll get paid only if the stock advances significantly.

That, combined with impressive gains from Evidence.com, Axon's acquisition of its only real rival in body cameras, and a slate of new products that could prove very popular with police departments, has helped the stock boom after years of so-so performance.

Moving forward, there are two critically important metrics for investors to watch: the number of cumulative seats booked on Evidence.com (it's currently at 226,900), and the roll out of the company's Records Management System (RMS) and its adoption by police departments.  If things go well, the former should continue growing briskly, while the latter may take time -- until early 2019 -- to gain a foothold in departments.

Of course, there's no guarantee that these stocks will still be on the list of successful growth stocks at the end of 2018. Sarepta especially can be extremely volatile -- based upon the success and approval of its DMD gene-editing drug.

It would be very difficult to imagine a scenario where the rest of the companies' underlying businesses suffer in the second half of the year. For instance, I don't see Netflix subscriber rolls, or Abiomed heart pumps ordered, or Etsy vendor sales, or Evidence.com bookings falling off of a cliff.

That should be heartening for investors. At the same time, however, that doesn't mean the stocks can't fall. All of these companies have enjoyed solid gains and are richly valued. If you're putting money behind them, make sure that it's for more than just the next six months -- that's the only way to ensure that you'll truly get the benefits that come with being a long-term investor in solid businesses.