Shares of Lumber Liquidators (NYSE:LL), the largest specialty retailer of hardwood flooring in North America, were spiraling 16% lower as of 11:16 a.m. EDT Tuesday after the company released second-quarter earnings.

Net sales during the second quarter checked in at $283.5 million, a 7.6% increase from the prior year, which was better than analysts' estimates of $281.3 million. Despite the top-line beat, the company posted a surprise $1.5 million loss, or $0.05 per share, which fell far short of analysts' estimates calling for a profit of $0.25 per share. Net sales in comparable stores climbed 4.7%, driven by a 4.6% increase in average sale and a modest 0.1% increase in the number of customers invoiced. 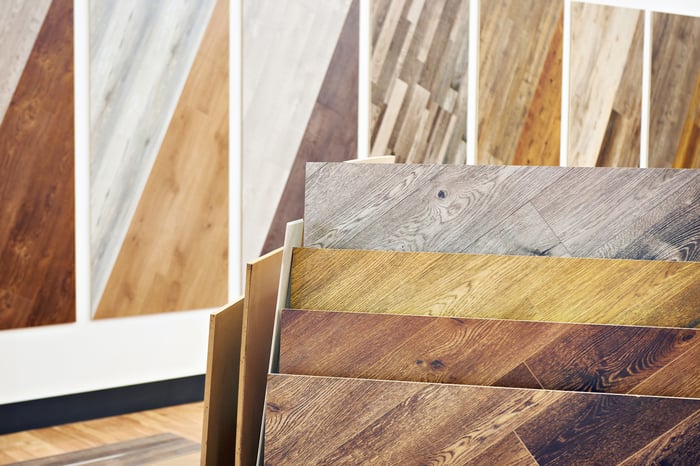 During the second quarter, we were pleased with our top-line revenue growth, as well as the continued strong installation expansion and opening of eight new stores. In addition, with the appointment of Jennifer Bohaty as chief ethics and compliance officer and Charles Tyson as chief customer experience officer, we have truly transformed the leadership of the company over the past two years. In that time we have recruited eight new, accomplished professionals to lead the most critical functions of our company. We believe this leadership is well on its way to building a sustainable, customer-focused, and growing company for the long term.

The driving force behind the quarterly loss was a rise in legal bills. Settling several lawsuits stemming from a CBS report in 2015 about formaldehyde levels in some of its flooring cost $9.5 million during the second quarter, and management expects a similar level of legal costs throughout 2018 and into 2019. It's been a bumpy 2018 for the company, and management has its work cut out to navigate the spike in legal costs before things can turn around. If you're holding shares, a long-term mindset is a must.