Please ensure Javascript is enabled for purposes of website accessibility
Log In Help Join The Motley Fool
Free Article Join Over 1 Million Premium Members And Get More In-Depth Stock Guidance and Research
By John Bromels - May 11, 2020 at 5:40PM

Shares of discount flooring retailer Lumber Liquidators (LL 3.53%) rose 50.3% in April, according to data provided by S&P Global Market Intelligence. Shares are still down 21.6% year to date after the broader market downturn in March.

Shares of Lumber Liquidators had fallen 52.1% in March as investors grew concerned about the novel coronavirus and its impact on retail sales. New hardwood flooring seemed to be exactly the kind of discretionary purchase that would be easy to delay. 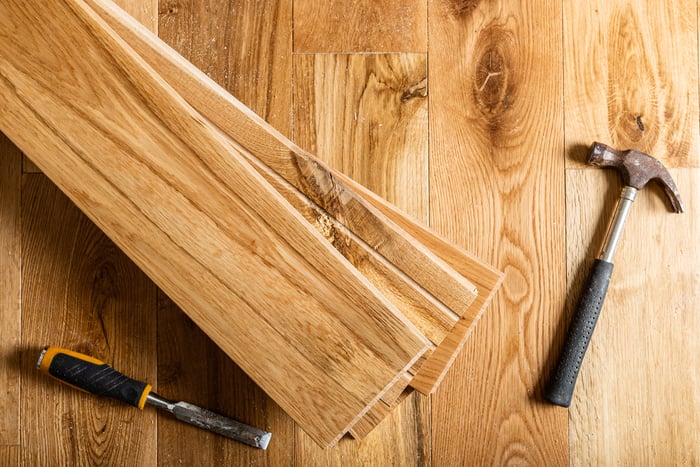 Sure enough, on April 20, Lumber Liquidators released an operational update, revealing that although Q1 comparable-store sales had been up 4% through March 21, they were down by 1% for the remainder of March. It's worth noting that many states did not issue stay-at-home orders until the very end of March or early April, so Q2 performance is likely to be worse.

In the update, the company also stated that it had reached an agreement with lenders to increase its available credit, and that it had $41 million in cash and equivalents on hand, plus about $79 million in additional liquidity. Lumber Liquidators also reduced its staff, temporarily furloughing 300 employees, and cutting the compensation of salaried employees. C-level executives, including interim president Charles Tyson, took a 25% pay cut, while board member pay was cut by 30%.

After the update, shares began to rise, helped along by tentative steps toward economic reopening that were being taken by several states.

Lumber Liquidators has been a volatile stock over the last decade. Over the last five years, it's frequently been unprofitable and/or cash-flow negative. With hardwood flooring an easily delayed purchase for existing homeowners, and with new home sales down, the company still looks like a risky investment.

One possible upside for Lumber Liquidators: With many people stuck at home, wear and tear on hardwood floors is likely to increase, which may drive some additional business for the company down the road.