Shares of the flooring specialist have suddenly surged, but don't expect the rally to last.

Lumber Liquidators (LL 0.82%) shares are soaring suddenly after a blog post on Reddit gave a bullish argument for the stock and encouraged other traders to snatch up shares and calls ahead of the Feb. 25 earnings report.

Shares of the wood flooring specialist rose as much as 30% on Thursday, closing the day up 18.6%. The stock was poised for more gains on Friday, surging as much as 22% in morning trading before cooling off.

The blog post from a trader argued that a tight housing supply and low interest rates should give the stock a tailwind and pointed to home construction indexes such as iShares U.S. Construction ETF (ITB -0.50%) and SPDR S&P Homebuilders ETF (XHB 0.30%), which are trading at all-time highs, while Lumber Liquidators' shares were trading in the single-digits. The stock plunged after a 60 Minutes report in 2015 found that some of the company's flooring products contained illegal levels of formaldehyde, and it has not recovered since then. At one point, the stock was trading near $120; today, it's near $10. 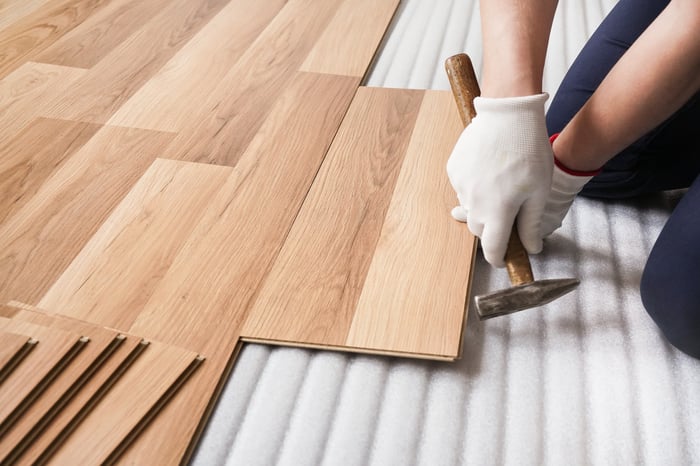 The Reddit poster also noted that the stock was heavily shorted -- 60% of the float is bet against, according to Yahoo! Finance -- and that the company is getting $25 million from U.S. Customs after a tariff on Chinese imports was retroactively reversed.

While those points all sound encouraging, there are at least four reasons to be skeptical of any sustained recovery in Lumber Liquidators' shares.

1. Growth is slow, and profits are negligible

Lumber Liquidators' revenue growth slowed sharply following the 60 Minutes report and has remained sluggish. For 2019, the company is targeting just flat to slightly positive revenue growth, and revenue fell 2.4% in its most recent quarter. Comparable sales are also expected to be down between negative 2% and flat for the year.

All of those signs portray a company that's struggling to grow and sustain a profit, despite an expanding economy and a relatively friendly housing market in recent years. Those results help explain why the stock has done so poorly since the 60 Minutes report came out.

2. Lumber Liquidators is a small fish in a big pond

The Reddit poster argues that Lumber Liquidators will be a natural beneficiary of an improving housing market as homebuilder and home-improvement stocks have rallied in the last year. However, there's a reason Lumber Liquidators has been absent from those gains. In addition to what the above numbers show, the company is also competing directly with home-improvement heavyweights such as Home Depot and Lowe's. In the U.S., installed floor covering sales were $40.8 billion in 2017, according to Floor Covering Weekly. By comparison, Lumber Liquidators' revenue was just $1.1 billion in 2018.

In other words, the company's prospects are more likely to be determined by its competitive position within its industry than the overall growth in home-building and home renovations. If it continues to lose market share to the bigger retailers, its financial results are unlikely to improve.

3. Management is in flux

On Feb. 6, the company reported that CEO Dennis Knowles had resigned effective Feb. 5, likely a result of the stock's poor performance. His duties will be split between Charles Tyson, the company's chief customer experience officer, who will serve as interim principal executive officer, and Nancy Walsh, the company's CFO. The board said it had hired a recruitment firm to assist with the search for a permanent CEO.

While naming a new CEO could be a catalyst for a comeback -- or at least increased investor confidence -- for now, it's going to be difficult for the company to mount any kind of comprehensive turnaround, as the interim leaders are likely engaged with running the day-to-day business and finding a new leader. Until a new CEO is named, there's little reason to expect a major change in the company's strategy that would drive the stock higher.

4. There could be another China problem on the horizon

As of 2018, about 47% of Lumber Liquidators' products were sourced from China, and other companies such as Apple have already warned about supply constraints stemming from the novel coronavirus outbreak.

Therefore, it seems likely that Lumber Liquidators' inventory levels could be affected by factory delays and shutdowns resulting from the virus if the outbreak continues. With the prime spring home construction season right around the corner, that could pose a significant headwind for the flooring specialist in the coming months.

While Lumber Liquidators may seem like an appealing turnaround play in some ways, there are still a number of challenges facing the stock. In short, it's cheap for a reason.

Though the rush in by day traders succeeded in pumping the stock, I wouldn't expect the fourth-quarter earnings report due out on Tuesday to add momentum to this rally. The company still has too many headwinds, and expectations are now inflated following the recent surge.